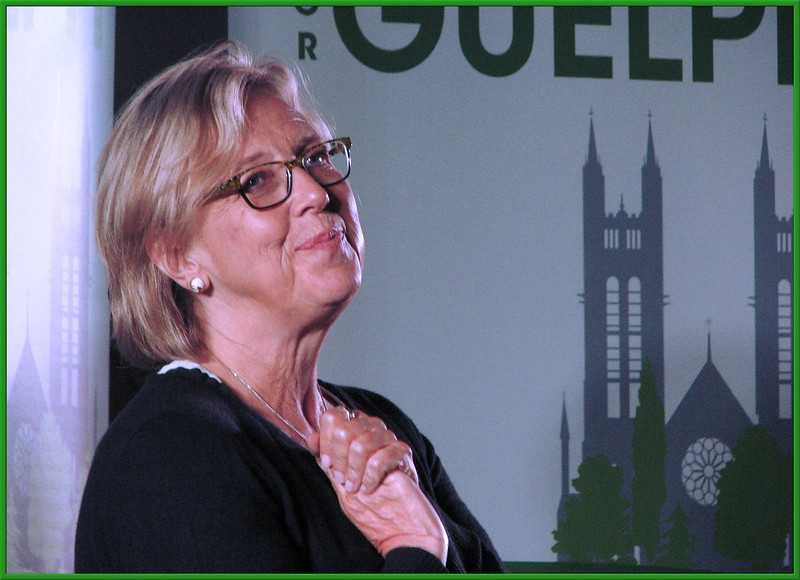 Portrait of Green Party Leader Elizabeth May in Guelph in 2015. Photo by: Flickr/Laurel L. Russwurm
Previous story
Next story

Green Party MPs and environmental groups say a financial relief program for onshore oil and gas companies should be scrapped after a scathing report by Canada’s climate watchdog was released Thursday.

“This is an egregious example of a fossil fuel subsidy,” said Julia Levin, senior program manager for climate and energy at advocacy group Environmental Defence. “This needs to be a no-brainer for the government to get rid of this program.”

The Emissions Reduction Fund provides up to $675 million in the form of interest-free loans and non-repayable grants to help land-based oil and gas companies attract investment, retain jobs, and reduce the greenhouse gas emissions that cause climate change. But a report by Environment and Sustainable Development Commissioner Jerry DeMarco found the program was not designed to retain jobs or reduce emissions, and that Natural Resources Canada vastly overestimated the emissions reductions the program would achieve.

In the first round of funding, nearly a third of the program’s approved projects indicated the money would lead to an increase in future oil or gas production, but those increases were not factored into its assessments, according to the report.

The 48-page report presents ample evidence the onshore emissions reduction fund was not actually effective at cutting emissions, despite its name. In fact, it could actually be increasing them, said DeMarco.

The federal government is “committed to eliminating fossil fuel subsidies that are incenting the production and exploration of oil and gas” by 2023, Natural Resources Minister Jonathan Wilkinson told Canada’s National Observer, but that excludes programs that “are good for the environment, like remediating orphan wells or programs focused on cutting emissions.”

Green MPs Elizabeth May and Mike Morrice want to see the program discontinued, with May calling it “part of a climate emergency acceleration plan” because it has locked Canada into increased oil and gas production at a time when phasing out fossil fuels has never been more important.

In question period Thursday, May asked Wilkinson how the program could be fixed.

Wilkinson said the fund, created in response to the COVID-19 crisis, aimed to do two things: sustain jobs and “ensure continued action on methane pollution at a time of economic crisis.” On both counts, he argued, the program succeeded.

However, the commissioner’s report found Natural Resources Canada did not list retaining jobs as an eligibility condition or an assessment criterion for funding decisions. DeMarco could not even say definitively whether any reductions came about as a result of the program because at least some of the program’s emissions reduction target was already accounted for under other federal policies.

Wilkinson went on to say the oil and gas sector has “certainly improved in terms of economic prospects” and the department has “commenced a review of the future of this program and the remaining funding.”

Moving forward, the most important thing is to ensure no more funds are sent out under the current framework, said Morrice.

To date, only $134 million of the $675-million fund has been disbursed, and he wants to see the remainder reallocated to projects that will actually achieve emissions reductions, like building retrofits, climate adaptation and initiatives geared toward a just transition away from fossil fuels.

As things stand, though, the recently audited emissions reductions fund is “another gift to the oil and gas industry at the expense of taxpayers,” says Levin.

“We shouldn't need the commissioner to audit every single spending program for government to make the right decisions when it comes to using public dollars,” she said.

“The commissioner is not going to do an audit of every single subsidy program, so how are we going to get the government to actually design programs that don't continue to fuel the climate crisis?”

In a statement to Canada’s National Observer, NDP environment critic Laurel Collins said “using faulty greenhouse gas emission estimates to fund the oil and gas sector” puts both Canada’s emission reduction targets and the health of Canadians at risk, and “the Liberals are not showing the climate leadership that they’ve repeatedly told Canadians they can expect.”

Both the NDP and Green Party remain adamant that Canada’s current greenhouse gas emissions reduction target of 40 to 45 per cent below 2005 levels by 2030 is not enough. May hopes the target can be changed to 60 per cent to reflect Canada’s fair share of global emissions before the UN climate conference next year.

Vanessa Corkal, a policy adviser with the International Institute for Sustainable Development, says there’s a “really large risk” of undermining our climate targets if proper assessments aren’t done to catch things like the overestimations revealed by the commissioner’s report.

No matter the sector, she says any government program involving emissions reduction must be designed with robust accounting principles, strict funding conditions and criteria to ensure job retention and emissions reduction outcomes are included in the design and properly measured.

DeMarco said repeatedly that the program’s non-repayable loans are “fossil fuel subsidies, no doubt about it,” and Corkal says the report illustrates the risks of subsidies that claim to have environmental goals but are actually highly inefficient.

She says the emissions reduction fund and other programs need to be included in Canada and Argentina’s ongoing peer review of inefficient fossil fuel subsidies, which has yet to be made public.

Launched in June 2019, the peer review is part of a G20 commitment to eliminate all inefficient fossil fuel subsidies. Similar peer reviews between other countries took between 12 and 24 months; Canada and Argentina’s review has been going on for nearly 30.

On Nov. 26, Wilkinson was asked about when findings of the peer review would be published. He said “that process is ongoing” and he couldn’t provide a deadline but recognized it is something the government needs to give an update on.

For Morrice, now is “not a time for review and study. It’s a time for decisive action.”

“How much longer do we need to study and review continued investment of public funds into the very sector that is the leading contributor to the climate crisis?”

“There's a disconnect between what ministers tell the public these programs are set out to achieve, and then what the actual parameters of the program are,” she said.

An example of this is the $1.72 billion given to B.C., Alberta, and Saskatchewan for cleaning up orphan or inactive wells. The federal government framed it as an opportunity to reduce greenhouse gas emissions, create jobs, further Indigenous reconciliation and contribute to an inclusive economic recovery, but a report found the Alberta program “amounts to little more than a bailout to the oil and gas industry.”

Most of the jobs the program boasted about creating were likely only temporary or would have existed with or without the funding, and there was widespread work stoppage in well cleanup activities as companies awaited grants, according to the report.

Alberta’s failure mirrors the commissioner's conclusions about the emissions reduction fund; both programs lack transparency and did not achieve what they said they would.

“These are companies that have profited, they've made billions of dollars, this is the richest industry in the world,” said Levin. “Why are we not putting it on them to take care of the mess that they're leaving behind?”

Pollution control is a

Pollution control is a standard cost of doing business. Industry's responsibility. Not taxpayers'. Industry does not get to download its costs onto taxpayers.
Wake up, Minister Wilkinson! An industry raking in billions of dollars does not need taxpayer support for cleanup. Of course, CNRL, Suncor, and Cenovus are more than happy to take our money to boost their bottom line. And you are responsible for this outrageous giveaway.
*
"'We’ve got all this cash': Analysts expect oil companies to keep buying their own shares in massive rally"
"Oil and gas companies expected to generate $21 billion in cash flow in excess of expenses over the course of next year" (Calgary Herald, Oct 27, 2021)
*
It's not up to taxpayers to pay for industry clean-up, reclamation, and reducing emissions. That's on industry. Polluter pay.
If I take a load to the dump, I pay for it. If my business uses the landfill, the business pays for it. Until now, fossil fuel producers and consumers have been using the sky as a free dump. Time to halt that practice.
Privatize the profits, socialize the costs. The fossil fuel industry's business model.
Subsidies offset carbon pricing. The opposite of climate action.
*
Before the recent federal election, Prof. Mark Jaccard told us that the Liberals were the most "climate sincere".
Prof. Andrew Weaver endorsed the Liberals' plan to fail on climate. The Observer's star columnists told climate voters to go with the Liberals.
Deafening silence now.
*
Wilkinson: "orphan well cleanup and the wage subsidy that was provided during the COVID pandemic as fossil fuel subsidies. Those aren't fossil fuel subsidies."
Nonsense. A subsidy is any form of financial support, benefit, or allowance to industry (or consumers) that benefits the bottom line. Sticking taxpayers with industry's costs for cleanup and emissions reduction is an obvious subsidy. The savings goes directly to the industry's bottom line and into shareholder's pockets.