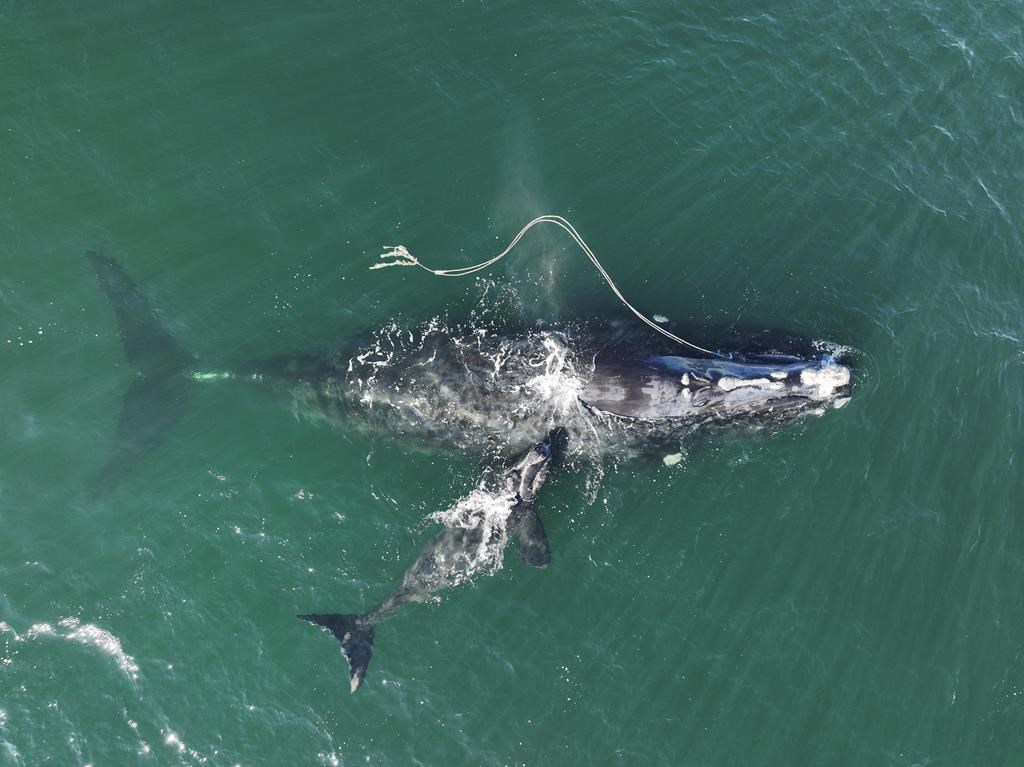 Scientists spotted an endangered right whale dragging a length of fishing rope caught in its mouth as it swam with a newborn calf off the Georgia coast, a rare confirmation of a birth by an entangled whale that experts determined they can't safely attempt to help.

The baby whale appeared healthy and uninjured when an aerial survey team spotted it Thursday alongside its ensnared mother near Cumberland Island, Georgia, said Clay George, a wildlife biologist with the Georgia Department of Natural Resources.

It was the second newborn right whale confirmed in the Atlantic waters of the Southeastern U.S. during the species' calving season that typically runs from December through March.

North Atlantic right whales are critically endangered, with scientists estimating that fewer than 350 survive. Adult females migrate to warmer waters off Georgia and Florida each winter to give birth. George said he's only aware of one other confirmed report, from January 2011, of an entangled right whale being seen with a newborn — and that one ultimately managed to free itself.

The female whale spotted last week, identified by the unique markings on its head, has been dragging fishing rope at least since March. That's when it was first reported entangled in Cape Cod Bay, off the coast of Massachusetts. Wildlife experts managed to shorten the rope before the whale headed south, but weren't able to free it.

“We haven’t seen a chronically entangled whale come down here from up north and have a calf," George said, adding: "It's amazing. But on the other hand, it could ultimately be a death sentence for her.”

That's because the mother whale may struggle both to nurse her calf and still have the energy needed to keep dragging the fishing line while also trying to recover from potential injuries to its mouth, George said. Female right whales typically gorge themselves in the waters where they feed and mate off New England and Canada before heading south to give birth. They won't eat again until they return — a round trip that can take three months or longer.

Trained responders in a boat approached the mother whale and calf on Thursday. After consulting with other experts, George said, the response team concluded any attempt to remove or further shorten the fishing rope would pose too great a risk to both the whales and the boat crew.

Spotters who scan the waters daily for whales and their babies during the calving season plan to keep an eye out for the pair.

“My concern is she’s still got two pieces of rope, about 20 feet, coming out from the left side of her mouth,” George said. “If those two pieces of rope ended up getting knotted around each other and there’s a loop, you could imagine that calf could end up becoming entangled.”

Scientists and advocates with the North Atlantic Right Whale Consortium said in October they suspect the marine mammals lost nearly 10% of their population last year, with their overall number falling to an estimated 336.

Right whales were decimated during the commercial whaling era, when they were hunted for their oil. Now scientists say entanglement with fishing gear and collisions with ships are killing right whales faster than they can reproduce.

I saw a great documentary

I saw a great documentary about Right Whales at the Planet In Focus Film Festival this year: https://lastoftherightwhales.com/the-film/ "With just over 330 remaining, these great whales rarely die of natural causes. Instead, they are run over by ships or suffer lethal injuries from fishing gear. If we don’t stop killing them, in 20 years they could be extinct."