B.C. tourism and holiday travel will be down due to flooding 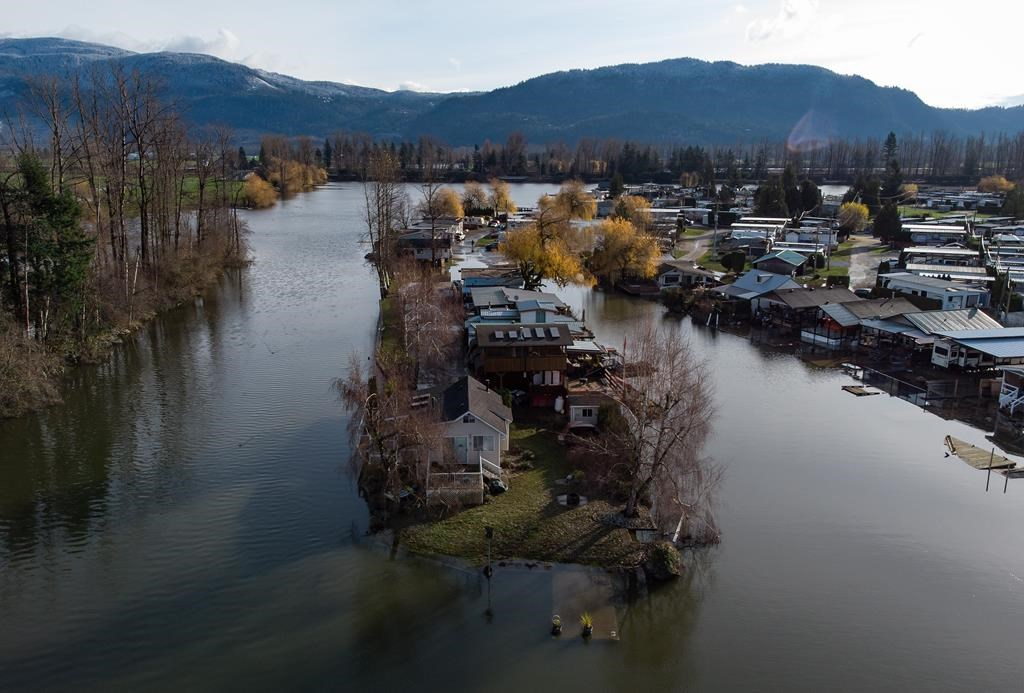 Properties are surrounded by high water after floodwaters began to recede at Everglades Resort on Hatzic Lake near Mission, B.C., on Sunday, Dec. 5, 2021. File photo by The Canadian Press/Darryl Dyck
Previous story
Next story

Parts of British Columbia's tourism industry are facing another uphill battle with an uncertain recovery horizon after this year's damaging storms.

Some attractions and landmarks were seriously damaged by flooding in November, while highways mangled by mudslides mean some operators will go without the typical holiday bump to their bottom line.

Walt Judas, CEO of the B.C. Tourism Association, said the extent of the damage is still unclear but some short-term impacts have already been felt.

"It's difficult to assess the damage of any specific asset, but having said that, we know without access to places like the Okanagan or points in between, that's really hurt a lot of tourism businesses," he said.

Both hotels and ski hills saw immediate cancellations following the storms, he said.

The floods compounded losses to the industry caused by wildfires this summer and the lingering impacts of the COVID-19 pandemic.

BC Parks said several parks in the Fraser Valley were damaged in the storms, including Cultus Lake, Sasquatch and Golden Ears provincial parks.

Canadian Pacific Railway built the tunnels through a granite canyon as part of a railway linking the Kootenays with the coast in the early 1900s. The tracks are long gone and it has become a popular hiking destination with spectacular views outside Hope, B.C.

Rob Wilson, BC Parks area supervisor for the south Fraser, said a geotechnical assessment will be the first step toward understanding the damage. The timeline for repairs is unknown and it isn't a top priority, given more urgent demands to support critical infrastructure and residents affected by flooding.

"Impacts are extensive," he said, noting the access road to the tunnels has also been destroyed.

"We have yet to gain a fulsome picture of how extensive it is."

Wilson asked the public to use caution when accessing trail systems after the storms and avoid parks that are closed.

Big White Ski Resort near Kelowna, B.C., was already prepared for an unusual holiday season with a disproportionate number of bookings from Lower Mainland residents due to the pandemic.

"We're coming up to our most important season of the year and what we're finding now is about 50 to 55 per cent of our mountain accommodation bookings are from the Lower Mainland for the Christmas-New Year's period," senior vice-president Michael Ballingall said.

In a typical year, about 80 per cent of bookings would come from Europe, Australia, New Zealand and Ontario, while the Lower Mainland would make up the remainder.

Unfortunately, with non-essential travel banned on major highways damaged by flooding, about 25 of 30 per cent of the bookings have been cancelled since the storms, he said.

The company is encouraging Lower Mainland residents to travel via the United States, but Ballingall said he feels for those who are facing more severe personal consequences than his industry.

"There are so many unfortunate reasons out there, we have customers from the Fraser Valley that have been flooded out. Every customer we're dealing with has a different reason they can't come," he said.

The travel cancellations mean hotels and restaurants, which can see 35 to 40 per cent of revenue earned during the holiday period, are also seeing a dip, Ballingall said.

Both Ballingall and Judas said they have received regular communication from the government about recovery and highway reopening plans.

"We understand business as normal is not going to happen this Christmas and we just hope people are recovering. There's so much loss out there," Ballingall added.

The highway, which connects the Lower Mainland to the Interior and is a major trucking route, had more than 130 kilometres of roadway damage and five bridges wash away.

However, the Transportation Ministry said until the Coquihalla can reopen, Highways 3 and 99 would remain restricted to essential travel for the holidays.

Judas said airlines have added routes to help move people between the Lower Mainland and the Interior with the routes closed to non-essential travel.

The false perception that everything is closed for business can also be damaging, he added. As an example, he said the airport in Abbotsford, B.C., has remained operational.

Recovery will move smoothly when there's as much predictability as possible, Judas said, adding he's been satisfied with the government's communications.

"It's working together with industry and government and all the other players to try and figure out a path forward," he said.

This report by The Canadian Press was first published Dec. 12, 2021.