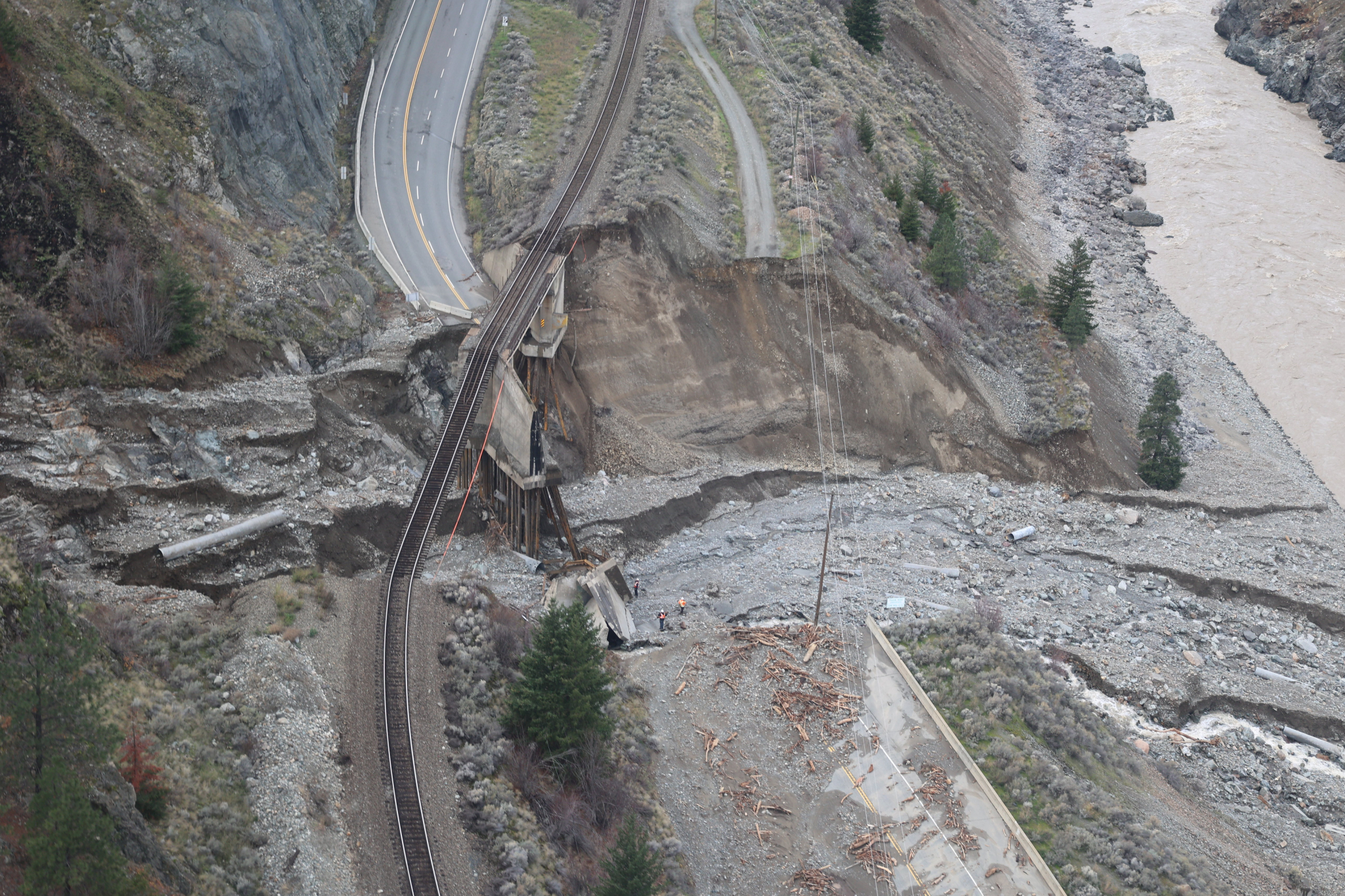 Damage along the Trans-Canada Highway due to extreme rain and landslides. Photo via B.C. Ministry of Transportation and Infrastructure / Flickr (CC BY-NC-ND 2.0)
Previous story
Next story

The cascading natural disasters in British Columbia have destroyed key pieces of infrastructure that experts say should trigger a nationwide risk assessment to prepare for Canada’s rapidly changing climate.

An atmospheric river dumped a month’s worth of rain on B.C., which when combined with melting snow and the mountains already scarred from a catastrophic wildfire season, led to landslides that destroyed segments of the Trans-Canada and Coquihalla highways.

“Recovering from this natural disaster will take time and a significant amount of collaboration and co-operation among all orders of government,” said Emergency Preparedness Minister Bill Blair at a press conference in Ottawa on Thursday with other federal ministers.

“Highway and rail line damage is significant, and how we move forward in terms of a response will not only guide our emergency response efforts locally but can cascade nationally,” he said.

Natural Resources Minister Jonathan Wilkinson said the climate crisis is here, and the country will have to adapt to this reality.

“Climate change mitigation, and certainly adaptation, will have to be front and centre in the decisions that we make going forward at every level,” he said.

Wilkinson said the short-term focus is on protecting people in danger, helping those affected, and restoring transportation routes. But as the immediate crisis subsides, he said better decisions must be made.

“In the medium term, though, we will have to think about how we can build back smarter, with more resiliency in the infrastructure that we have,” he said.

Experts Canada’s National Observer spoke with said a priority should be making climate risk assessments standard practice across the country. That’s in part because infrastructure is designed to withstand weather impacts based on historic climate data –– a design standard that has little relevance in the emerging era of climate breakdown.

“Infrastructure continues to be built in that way, making it in many ways obsolete as soon as it gets built (because) it will be there for decades or even a century,” explains Canadian Institute for Climate Choices adaptation research director Ryan Ness.

Infrastructure is designed to withstand weather impacts based on historic climate data — a design standard that has little relevance in the emerging era of climate breakdown. #cdnpoli #BCStorms

“Climate change poses big risks to Canada's infrastructure … and given that, it's surprising that infrastructure decisions aren't accounting for a warming climate in Canada even as we see an increasing number of climate-related disasters.”

The institute produced a report in September called Under Water that found a warming climate translates into billions of dollars of additional damage to Canadian infrastructure. Costs grow as the climate crisis deepens, but by the end of the century, flood damage costs could reach as high as $13.6 billion annually, road and railway damage could be $12.8 billion annually, and damage to the power grid could cost utilities and consumers up to $4.1 billion annually. Preventative measures to adapt can reduce those costs by 80 to 90 per cent, the report found.

The report also found that Canada lacks climate risk information, which is leading to poor decision-making. For example, available flood maps are 20 years old on average, with “virtually none” of them taking into account how climate change may impact the risk of flooding. At least 500,000 buildings are at risk of flooding and not identified by available government flood maps, the report estimates. Information on other climate risks, like wildfires, is also largely missing.

“In the absence of this information, few infrastructure owners or investors are able to assess and manage existing climate risks, let alone future risks associated with climate change,” the report found.

Novel Futures Corporation director and International Institute for Sustainable Development senior associate Darren Swanson said the disaster unfolding in B.C. is highlighting the importance of widespread risk assessments as a precursor to building resilient infrastructure — because without knowing what the risks are, it’s impossible to adequately prepare.

Swanson explained risk as a function of three things. The first is the hazard itself, like heavy rainfall. The second is the exposure to the hazard, and the third is what the vulnerability to the hazard is.

“So infrastructure owners and operators have three dials to deal with when reducing risk, and a risk analysis or risk assessment helps you understand how to turn those dials,” he said.

B.C. already takes some mitigating steps to deal with natural hazards. For example, it has an avalanche safety program where staff monitor for avalanche risk, and will literally trigger avalanches by throwing explosives out of a helicopter when safe to do so.

A 2019 climate risk assessment of the province identified “extreme precipitation and landslide” risk as something that would increase in a warming climate. That assessment identified major landslides occurring once every 52 years and projected that likelihood to increase to a range of 11 to 50 years by 2050.

The assessment said that other than extreme rain contributing to landslides, the risk is largely dependent on physical characteristics like “hill slope steepness and bedrock deformation,” meaning severe risks are localized.

Experts have been saying for

Experts have been saying for decades that addressing climate change (CC) is key to reducing this type of risk and that if not addressed the costs of repair, etc. will be far in excess of the cost of CC mitigation.

In the case of BC the obvious "elephant in the room" is policies that emphasize expanding fossil fuel production (including fracking, LNG expansion, the Trans Mountain Pipeline (and expansion of Alberta oil sands production) and resistance to ending old growth / clear cut logging. Claims by our PM and others that this expansion is essential to fund fossil fuel phase out is a lie only believed by the gullible. The CC related disasters that have hit Canada (and particularly BC) in 2021 (i.e. heat dome, wildfires, floods, etc. and associated infrastructure impact, fatalities, economic cost, etc.) should be a wake up call to our political leaders to finally admit what intelligent people have been saying for years: stop ALL projects related to EXPANSION of fossil fuel production and policies, such as ending all subsidies to the fossil fuel industry, to encourage phase out of existing production. Canada has been essentially giving away our resources to foreigners while Canada bears the negative effects of their extraction. In addition clear cut logging (particularly in BC) has resulted in destruction of biodiversity, increased risk of landslides (as implied in the article above), decreased carbon capture, etc.

There are high economic costs to taking the actions described, but it should be abundantly clear to even our "bought and paid for" leaders that we are rapidly losing a war for survival of civilization that we haven't even begun to fight. It's too late for the gradual approach. Our current way of life is going to change -- quickly -- whether we like it or not. We CAN still reduce the degree of climate impact even if we can't reverse the existing impacts. Just think what our younger generations are going to face if the coming decades see more frequent and more intense events like the heat dome/fires/floods of 2021. Finally, isn't it about time Canada truly became the climate leader our PM and Premier claim, instead of in fact being one of the worst offenders?