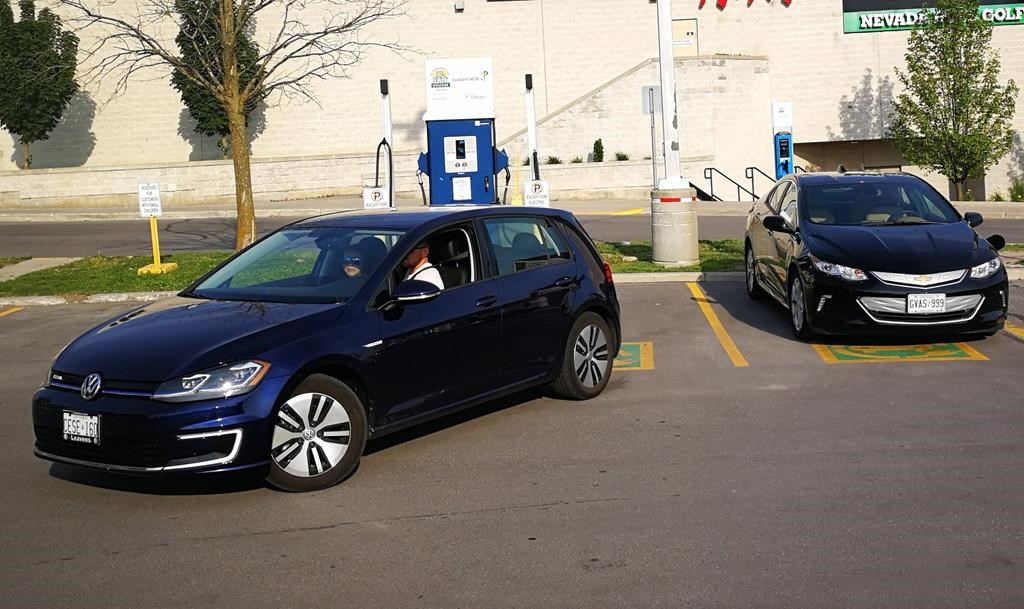 A Chevrolet Volt is plug into a charging station as a Volkswagen e-Golf backs into a parking spot at Lansdowne Mall in Peterborough, Ont., on June 17, 2018. File photo by The Canadian Press/Doug Ives
Previous story
Next story

Doug Ford is pitching Ontario as the next electric vehicle manufacturing powerhouse, seemingly a far cry from the premier who three years ago cancelled incentives for people to buy them.

Where some see contradiction, others see calculated election strategy.

Shortly after coming to power in 2018, Ford's government scrapped Ontario's cap-and-trade system, and with it the electric vehicle rebates funded by that program.

He also stopped building charging stations — the provincial transit agency even removed some — and dropped a requirement for new homes to include the wiring for potential EV chargers.

Ford at the time decried the rebates of up to $14,000 as subsidizing purchases for wealthy buyers — and he still does, mostly.

In the year after the rebate cancellations, the market for electric vehicles tanked in Ontario. At its highest point, electric-vehicles made up around three per cent of the province's total passenger vehicle sales. That dropped to below one per cent after the rebate was scrapped.

The introduction of a federal rebate saw Ontario's electric-vehicle sales begin to climb again. The most recent data from Statistics Canada puts the numbers back to nearly where they were before the provincial cancellation.

But that is still well below levels seen in provinces with their own rebates, such as British Columbia and Quebec, which are seeing electric-vehicle sales of about 13 per cent and 10 per cent, respectively.

Electric-vehicle advocates say Ontario can’t be a leader in manufacturing while being a laggard in sales.

Joanna Kyriazis, senior policy adviser at Clean Energy Canada, said a recently announced Ontario auto strategy was more friendly to electric vehicles than she would have expected, but it's missing the second half of the equation.

"I do think that there’s been a recent shift in the Ford government's view of electric vehicles, at least on the manufacturing side," she said.

Ontario's "Driving Prosperity" plan focuses on repositioning the province's auto sector to build electric vehicles, as well as establishing battery production here, taking advantage of critical minerals found in the Ring of Fire. It aims to build at least 400,000 electric vehicles and hybrids by 2030.

Ontario has secured investments from big automakers such as Ford and GM to build new electric vehicles at their facilities in the province in the coming years, and the premier is looking to attract more.

"Our government knows it and the auto industry knows it: Ontario is the No. 1 place in the world to build the cars and trucks of the future," Ford said when he announced the strategy last month.

There is a section on encouraging electric vehicle adoption, but is mostly limited to establishing a Transportation Electrification Council to seek advice on ways to do that. Without more work to encourage domestic sales, most of the electric vehicles eventually produced in Ontario would just be shipped elsewhere, Kyriazis said.

"Producing more EVs in Ontario will not directly translate into more EV sales in Ontario unless there’s more support for consumers to go electric," she said.

Acting on the manufacturing side but not the consumer side is contradictory, said Daniel Breton, president and CEO of Electric Mobility Canada.

"If Ontario wants to be a leader, it's not a buffet where you pick and choose what you decide to do," he said.

But the political aim of this government, strategists say, is the focus on jobs.

Ford is trying to secure manufacturing in regions like Oakville and Windsor, whereas Liberals look at the issue through a consumer and environmental lens, said Andrew Steele, a vice-president at consulting firm StrategyCorp.

"If you’re looking at it as, 'I need these kinds of jobs to stay here in Ontario, that’s my critical preoccupation,' you’re going to spend time thinking about incentives to bring jobs here," said Steele, a former senior Liberal staffer.

"I think (Ford's) agnostic to fuel type. That’s where the market is going, so we need to get there for jobs."

David Tarrant, Ford's former executive director of strategic communications, said there is a "powerful end-to-end story" Ford can tell about electric-vehicle manufacturing in Ontario, starting with the critical minerals found in the Ring of Fire.

It also gives Ford the opportunity, in the run-up to the June election, to talk about manufacturing job losses under the former Liberal government, and their heavily criticized rebates that went to drivers of luxury electric vehicles, he said.

"What we’re talking about is how Ontario from the manufacturing side and the supply side can actually drive and support this kind of revolution in electric vehicles, create a bunch of jobs … rather than using Ontario taxpayers’ money to support the purchase of vehicles that were manufactured elsewhere," said Tarrant, now a vice-president at Enterprise, a strategic communications firm.

Jeff Crumb and his family outside Kitchener, Ont., are in the market for a new car and are leaning toward electric. He said the choice would be a lot easier if there was a provincial incentive to cut the purchase price.

"If there was a rebate in place it would be a no-brainer. We would do it immediately," he said.

An election promise from the Ontario Liberals caught Crumb's eye, though he's not able to wait to see the outcome of the June 2 vote before making his next vehicle purchase.

"When the price of an electric vehicle is, you know, 10 or 15 or $20,000 more than a gas-powered vehicle, it does make that decision really tough," Crumb said.