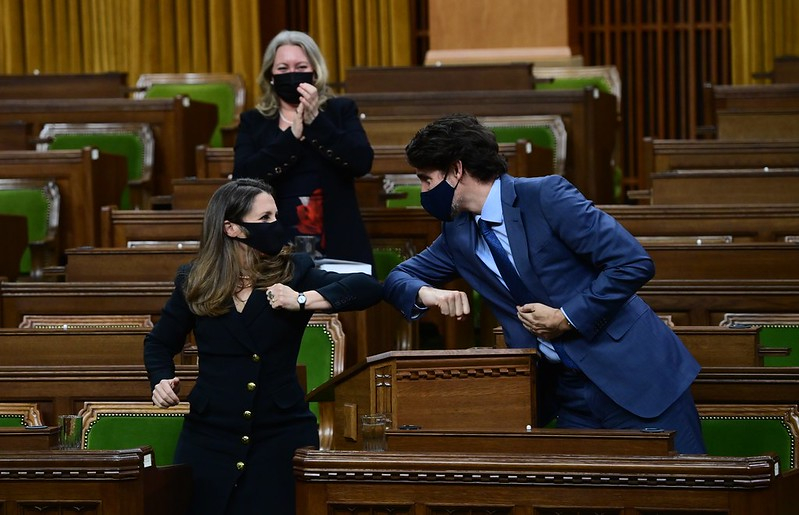 For as long as he has been involved in federal politics, Justin Trudeau has made it clear he’s a proud feminist. That stance has informed everything from the gender balance in his cabinet to policies like increasing paid leave for victims of family violence and the landmark new national child care program.

But if he wants to cement his legacy as Canada’s first openly feminist prime minister, he’s going to have to do something much more dramatic: step down.

It’s no secret Finance Minister Chrystia Freeland is well-positioned to take Trudeau’s job when it comes time for his proverbial walk in the snow. But it’s the timing of that walk that will determine whether he actually positions the next leader of the Liberal Party of Canada for success or sets them up for the same kind of failure that Kim Campbell experienced in 1993. And if Canada’s second female prime minister is forced to wear the failures of a male predecessor the way its first one did, it will mean Trudeau’s good words about feminism were more about branding than belief.

He doesn’t have to hand the job to Freeland, mind you. There are plenty of other talented and capable women in his cabinet who could take the top job, from Defence Minister Anita Anand to Foreign Affairs Minister Mélanie Joly, as well as those who used to be in his cabinet, like Catherine McKenna. But if and when he steps down, he should make it abundantly clear his successor can’t be another man in what has been, for the Liberal Party of Canada, an unbroken line.

The idea of a leadership race that excluded men would surely provoke howls of outrage and indignation from certain Postmedia columnists and Conservative politicians, but the Liberal Party has a long-standing convention of alternating between leaders from English and French Canada — one that remains intact to this day. Given that history, it wouldn’t be much of a stretch for Trudeau to begin a new convention of alternating between male and female leaders.

But that convention will only stick if he puts his successor, and the party’s first female leader, in a winning position. And the longer he waits to pass the baton, the more likely it becomes that the person he hands it to will stumble.

The bill on Canada’s COVID-19 response is going to come due in the next few years, and the prospect of having to raise taxes is rarely a political winner (it was the GST, after all, that helped sink Campbell’s party in 1993). And after three election victories in a row, the accumulated weight of six-plus years’ worth of scandals and smaller controversies can start to drag a government down.

Yes, Trudeau has proven he’s one of the best campaigners in Canadian political history, and it’s entirely possible he could win another one whenever it comes. That’s even more likely if the Conservative Party of Canada continues to self-destruct over things like vaccination policies and climate change, and if it continues to prioritize the needs of Alberta’s oil and gas industry over the rest of the country.

But counting on your opponent to fail is a dangerous strategy, one that led Stephen Harper to defeat in 2015.

Instead, Trudeau needs to focus all his energy right now on setting his successor up to win the majority government he couldn’t. He should use the control he has over the Liberal Party of Canada to clearly define the terms of its next leadership race, and ensure the eventual winner is its first elected woman leader. And he should campaign harder than ever on her behalf in the places where it matters most.

Opinion: If Justin Trudeau wants to cement his feminist cred, he must step aside and pass the baton to a woman. @maxfawcett writes for @natobserver. #feminist #cdnpoli #leadership

Then, and only then, will he truly be able to call himself Canada’s first feminist prime minister.

The idea of a woman leader of

The idea of a woman leader of the Liberal party is past due. The idea of Chrystia Freeland kind of spooks me though. The woman never met a right wing coup she didn't like.

Is the PM quitting his job to

Is the PM quitting his job to prove he’s a feminist more important than staying in the job to continue dealing with climate, Covid, the economy, etc?