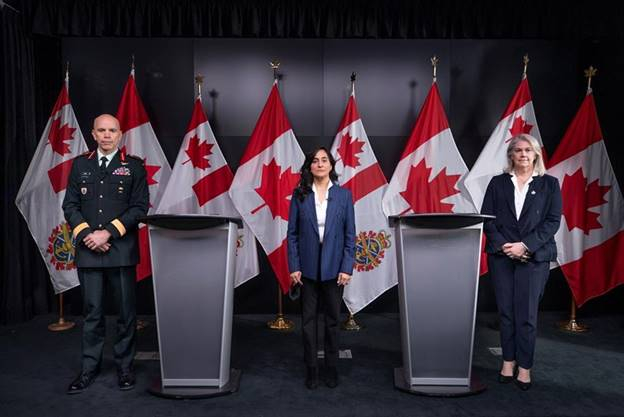 In a long-awaited apology to survivors of sexual misconduct, Defence Minister Anita Anand acknowledged “successive governments have not done nearly enough to stamp out this scourge” in the Canadian military.

“This is a failure that our Canadian Armed Forces, our department and the government of Canada will always carry with us,” Anand said during the apology on Monday. “These institutions failed you, and for that we are sorry. I am sorry.”

The apology was first promised in 2019 as part of a $600-million settlement deal with current and former service members involved in several class-action lawsuits; nearly 19,000 claims have been submitted to date.

For survivors of sexual misconduct in the Canadian military, feelings about the apology will be mixed, but some were left with hope.

“I'm still conflicted, yet grateful,” said Dawn McIlmoyle, a survivor of military sexual assault who advocates for survivors of abuse. “I think about my lost career, but I also have this feeling of joy that it's actually being acknowledged and taken seriously.”

McIlmoyle says after reporting her sexual assault, she was disciplined and even made to stand beside her attacker during disciplinary proceedings.

She left the military soon after, feeling “invisible,” “abandoned” and “rejected,” and dealt with post-traumatic stress disorder (PTSD) in the following years.

Now, McIlmoyle says she thinks change may happen — a feeling she has not had in a long time.

Alongside Anand, defence chief Gen. Wayne Eyre and Jody Thomas, the deputy minister at the Defence Department, offered apologies on behalf of the Canadian Armed Forces and the Department of National Defence.

Reactions to Ottawa's apology to survivors of military sexual misconduct are mixed, with some feeling hopeful and all calling for concrete action #cdnpoli #apology #Military #SexAbuse

The apologies addressed not just those directly harmed by military sexual misconduct, but also their families, friends and colleagues, something McIlmoyle appreciated given the wide-reaching impacts sexual assault and misconduct have on individuals and their loved ones.

Thomas referenced her own experiences with sexual misconduct in the navy.

“I endured what was happening to me and around me hoping to prove that I was tough enough and deserved to be there,” she said.

“I didn’t understand at the time that such behaviour was not about me, but rather, about power, and the abuse of it.”

Thomas says the Department of National Defence is currently working “to propose fundamental changes to key elements of CAF systems, processes and governance.”

“It was a beautiful apology ... I don't know how much it will change anything, but at least there was some recognition it happened,” said McIlmoyle.

In an emailed statement to Canada’s National Observer, Green Party interim leader Amita Kuttner said the apologies were “necessary and welcome” and highlighted Anand, Eyre and Thomas’ statements that an apology is just the first step.

“Urgent next steps include real supports for survivors, greater transparency and accountability and a detailed plan to change the culture in our military so that the safety of all who serve can be guaranteed,” Kuttner’s statement reads.

NDP defence critic Lindsay Mathyssen issued a statement echoing that sentiment, adding the Liberals have yet to implement the recommendations of a landmark 2015 report by former Supreme Court of Canada justice Marie Deschamps that laid out the sexual harassment and misconduct problems in the military and included action items for the federal government.

“This government has got to prove they're going to do better,” Mathyssen’s statement reads.

“After decades of being dismissed and ignored, members of the Armed Forces don’t trust that their allegations will be taken seriously. How can they when the government has protected powerful men at the top of the CAF and allowed this problematic culture to continue for so long?”

The acknowledgment and sincerity of the apology were hopeful, said Sam Samplonius, co-chairperson of It’s Not Just 700, a group that advocates for survivors of military sexual misconduct.

However, including some specific examples of what is being done would have enhanced the apology further, Samplonius said.

In the short term, Samplonius said many survivors need peer support, adding that because every survivor was “harmed differently,” there will be a range of reactions to the apology.

“Some people were recently harmed, or they were harmed so badly that there's nothing they feel they can hear that will make them feel better, so you're going to get those people saying the apology means nothing to them,” she said.

Samplonius and It’s Not Just 700 encourage people to reach out to friends, family and colleagues who are victims of military sexual trauma, particularly in the aftermath of the apology.

She also says people who have been a perpetrator or bystanders to military sexual misconduct should reach out — when appropriate and only if they are sincerely sorry — to apologize for past behaviour.

Moving forward, McIlmoyle is hopeful collaboration between the military and the survivors can result in healing.

Allowing and encouraging survivors to give speeches and tell their experience to groups or whole battalions could be one way to “give back the power,” said McIlmoyle.

“The trauma of the past doesn't define us. The military just acknowledged it and apologized; whether you want to believe it was sincere or not, it's been done,” she said.

“It's a stepping stone. Now we have to get to the next stone.”


— With files from The Canadian Press