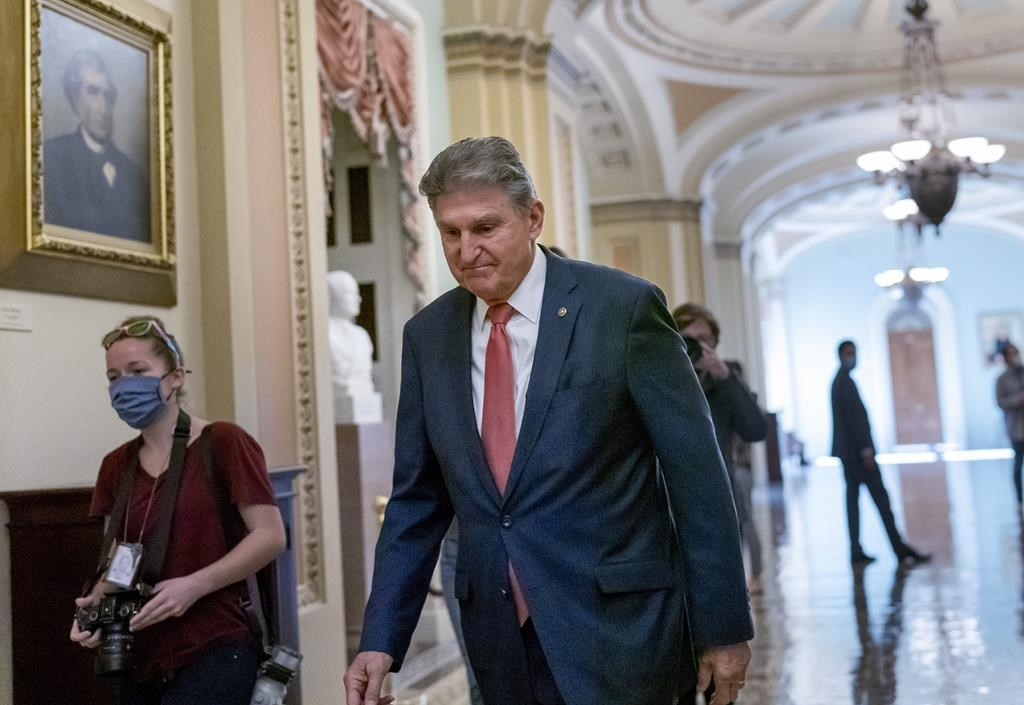 Sen. Joe Manchin, D-W.Va., a centrist Democrat vital to the fate of President Joe Biden's legislative agenda, walks to a caucus lunch at the Capitol in Washington, on Dec. 17, 2021. File photo by The Associated Press/J. Scott Applewhite
Previous story

West Virginia Sen. Joe Manchin, a key Democratic vote in the evenly divided Senate, confirmed today that he's a "No" on the $1.75-trillion Build Back Better bill.

The legislation includes tax credits worth up to $12,500 on U.S.-assembled electric vehicles that are built with union labour — a devastating blow to the Canadian auto industry.

The plan has been atop the agenda of countless federal ministers and officials, including Prime Minister Justin Trudeau himself, during multiple in-person and virtual meetings in recent weeks.

If officials in Trudeau's office are breathing a little easier, however, they are refusing to say — likely in part because the reprieve could prove only temporary.

After months of meetings with colleagues and officials from Capitol Hill to the White House, including Biden himself, Manchin declared his position in an interview on Fox News.

"This is a 'No' on this legislation," said Manchin, whose main concerns have been the true price tag of the "mammoth" climate and social-spending package, as well as its likely impact on a raging inflation rate.

And as a senator in a state where Toyota is a major employer, he's acknowledged that he's not wild about the EV tax credit scheme, either.

A Democrat in a state that supported Donald Trump by a large margin in the 2020 election, Manchin — up for re-election himself in 2024 — has been a focal point for every step of Biden's legislative agenda.

He said the combination of rampant inflation, soaring federal debt, "geopolitical unrest" and a seemingly resurgent COVID-19 pandemic mean now is not the time for so much spending.

"I cannot vote to continue with this piece of legislation. I just can't," Manchin said. "I've tried everything humanly possible. I can't get there."

The news prompted a jarring response from the White House.

"Just as Sen. Manchin reversed his position on Build Back Better this morning, we will continue to press him to see if he will reverse his position yet again, to honour his prior commitments and be true to his word," press secretary Jen Psaki said in a statement.

Psaki said Manchin even proposed to Biden an alternate framework for the bill — "missing key priorities," Psaki said, without elaborating — and promised to keep the discussions going.

"If his comments on Fox and written statement indicate an end to that effort, they represent a sudden and inexplicable reversal in his position, and a breach of his commitments to the president and the senator’s colleagues in the House and Senate."

Canada had warned senators that it would launch a barrage of retaliatory tariffs and suspend certain elements of the U.S.-Mexico-Canada trade agreement if the tax-credit plan went ahead.

The proposal would amount to a 34 per cent tariff on electric vehicles assembled in Canada and violates the USMCA, Deputy Prime Minister Chrystia Freeland and Trade Minister Mary Ng wrote in a letter to Senate leadership.

Manchin's declaration will likely buy Canada some valuable time, particularly given the chance that the Republicans win control of the Senate and potentially even the House after the midterms in 2022.

But the White House isn't giving up just yet.

"We will not relent in the fight to help Americans with their child care, health care, prescription drug costs, and elder care — and to combat climate change," Psaki said.

"We will find a way to move forward next year."

This report by The Canadian Press was first published Dec. 19, 2021.