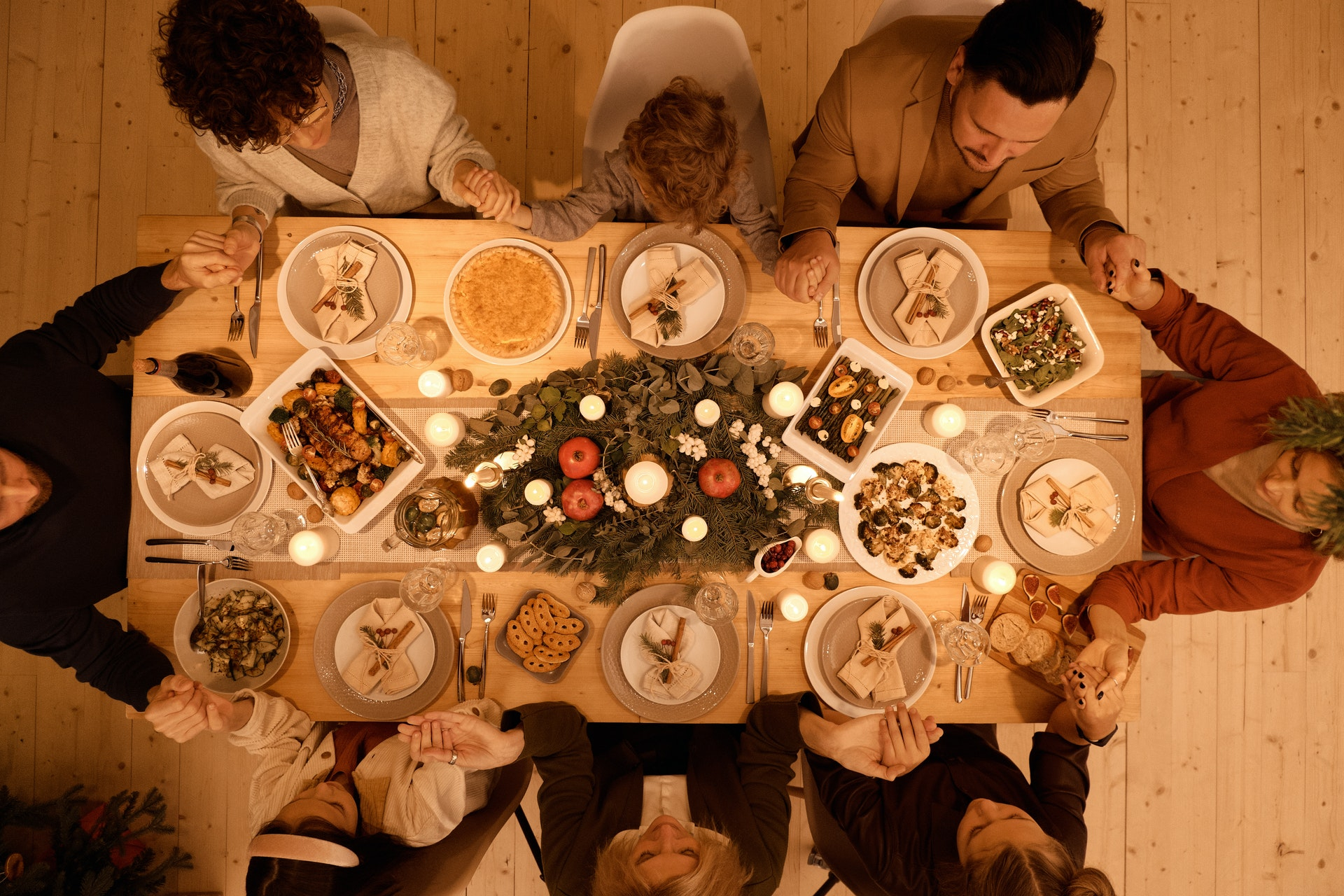 Will we show our families love by serving sizzling roast beef, turkey, or ham over the holidays? Or will we express a more universal love by heeding the UN’s call for first-world nations to reduce their meat and dairy consumption to stop climate change?

The holiday meals we share with family and friends usually include meat and dairy, foods that only well-off folks can afford. Sharing our good fortune is part of the holiday spirit. And we also want our kids to have the same tasty memories we had.

But, the meat and dairy industries belch out greenhouse gases (GHG) into the atmosphere. Those gases crank up the planet’s furnace, turning even the North Pole toasty. The evidence reveals itself in melting ice caps, rising sea levels, floods, droughts and empty grocery shelves. Sizable meat and dairy reductions would limit climate catastrophes.

But what about switching from beef and ham to poultry or fish? Though lower in GHG emissions, they’re much more damaging to the environment than the most unsustainable legumes.

Remember, it’s not just you and your family who will eat these foods. There will be 38 million other Canadians likely consuming them, too. Among the 7.9 billion people on the planet, less than one per cent are vegan. If we don’t change the way we eat, we’ll smash through our environmental limits. Consume plant-based foods or consume the planet; it’s our choice.

Our choices have consequences. Globally, more catastrophic weather has occurred in the last 50 years than in the last 200. The World Meteorological Organization found that between 1970 and 2019, 50 per cent of all disasters, 45 per cent of all reported deaths, and 74 per cent of all reported economic losses came from climate volatility: stronger typhoons in Taiwan; a drought-caused-food-system collapse in Spain; desertification gobbling up Mongolia; and an absence of rainfall in Kenya that left dying cattle resembling deflated reindeer lawn decorations.

The GHG belching out of our food system includes carbon dioxide, methane, and nitrous oxide. The biggest belches — 14.5 per cent of anthropogenic emissions — come from livestock. It’s hard to believe when most of us have driven by grazing cows but have not seen one breath of methane. We’ll need Santa to slide a drone with infrared imaging technology under the Christmas tree to see the fog of methane rising above the ruminants’ docile, cud-chewing heads.

But don’t get too close. A large population study examined the health risks of “high levels” of gas and dust dispersed from livestock farms. It found that both farmers and neighbours had higher incidents of respiratory disease and premature deaths from heart disease, stroke, and lung cancer.

So, we’re knuckered? Not true, says Gerard Wedderburn-Bisshop, a former principal scientist with Queensland Government Natural Resources in Australia, and a member of Climate CoLab at MIT’s Center for Collective Intelligence. “Shifting to a plant-based diet will have an immediate impact on climate because animal agriculture is the leading cause of deforestation and land burning, and a major source of climate-changing methane and nitrous oxide.”

Opinion: If we don’t change the way we eat, we’ll smash through our environmental limits. Consume plant-based foods or consume the planet; it’s our choice, writes @KarenJLevenson. #StopAnimalGifting #vegan #Climatecrisis

According to the US Environmental Protection Agency, methane has up to 36 times the Global Warming Potential (GWP) of CO2, and nitrous oxide has nearly 300 times the GWP of CO2. Both have a far greater capacity to trap heat in the atmosphere than CO2 emissions.

But droughts, wildfires, and floods aren’t the only disasters we should worry about. Globally, the livestock industry consumes 70 trillion gallons of fresh water annually.

“One calorie of meat requires 10 times as much water to produce as a calorie of food crops,” according to a secret Nestle’s report obtained by WikiLeaks. In it, the world’s largest food company warns that due to animal agriculture, “one-third of the world’s population will be affected by freshwater scarcity by 2025.”

That doesn’t stop the Canadian Dairy Farmers or Canadian Beef from launching advertising and digital campaigns, like their TV spots “Happy Holidairy” and “The One and Only Beef”, with nation-wide social media support and influencer outreach in attempts to dispel our fears about their products’ climate impacts.

Let’s put them on the naughty list and take back the narrative. We need to accept that our holidays are being transformed by climate change. If we want to give our children and grandchildren a happy and healthy holiday future, we must transform our holiday menu. Check out the many delicious plant-based recipes for the holidays online. How about a roast turkey made from soy, kale, and cranberries?

Here’s to new traditions. For the kids.

Depending on which pie chart

Depending on which pie chart you use, the effects of agriculture can be anywhere from nine to perhaps 12 percent of the GHG emissions, and that should include very GHG expensive cultivation of soil for crop production (which also comes with biodiversity loss, pesticide residue, high water use and water pollution) and it is would reasonably be weighted heavily towards livestock associated with intensive livestock production, not properly managed small farms. Those who focus primarily on diet, seldom seem to consider the ecological costs of cultivation, of water use, of biodiversity loss, of pesticide use...they seldom speak of limiting their international air travel, selling not only their gas car but their electric one, and they almost never speak of our burgeoning population and the costs of having yet another child, by far the greatest contribution to climate change over time. Having one more child has been calculated by this Swedish study to add 58 tonnes of GHG while a plant based diet is about .85. [See link below] Not to say we should not limit our meat and dairy intake, or at least ensure that animals are raised in the best possible ways, but perhaps writers should be a little more circumspect about causes. As for population, and consumption, perhaps we as a society need to simply be more mindful of the consequences of our actions...perhaps not necessarily knee-jerk applauding three sets of twins and two other children as the CBC did on the national news this week.
https://www.theguardian.com/environment/2017/jul/12/want-to-fight-climat...

The "study" noted appears to

The "study" noted appears to count lifelong carbon expenditures of children and grandchilldren as well, which seems to me to be quite bizarre.
I'd note that Sweden, like Canada and most western societies, hasn't for some time had a replacement birthrate, and so in fact will require contributions to the economy and taxation by approximately 2 immigrants per nuclear family.
That has been the situation in Canada since the 1970s, a fact which the racist right chooses to ignore, even as the people who are part of it love things like their health care, baby bonuses and Old Age Pensions.

Since I've seen it that footage of three sets of twins (and one set of parents: no "two other children) several times on TV, what you are ascribing to "national news" seems likely to be an advertisement. The third time, I looked to see if the audio referred to "new" babies, but I saw none. Then again, I could have missed them.)

Check out UN population expert Hans Rosling's Ted talks on YouTube. The best thing to do if you want to reduce world population increase is to provide education and healthcare in Africa and east European countries, where the birthrate remains high because of historically high infant mortality rates and low incomes, requiring the work of children for a family to survive.

Thank you for this article. I agree that eating meat, eggs and dairy is unnecessary, and has a high cost in terms of animal suffering, land use, deforestation, water use, biodiversity loss, water pollution caused by fertilizer and animal waste, overuse of antibiotics, as well as greenhouse gas emissions. Eating fish is also problematic due to overfishing and heavily-polluting fish-farming. I hope that more and more people start experimenting with plant-based meals.