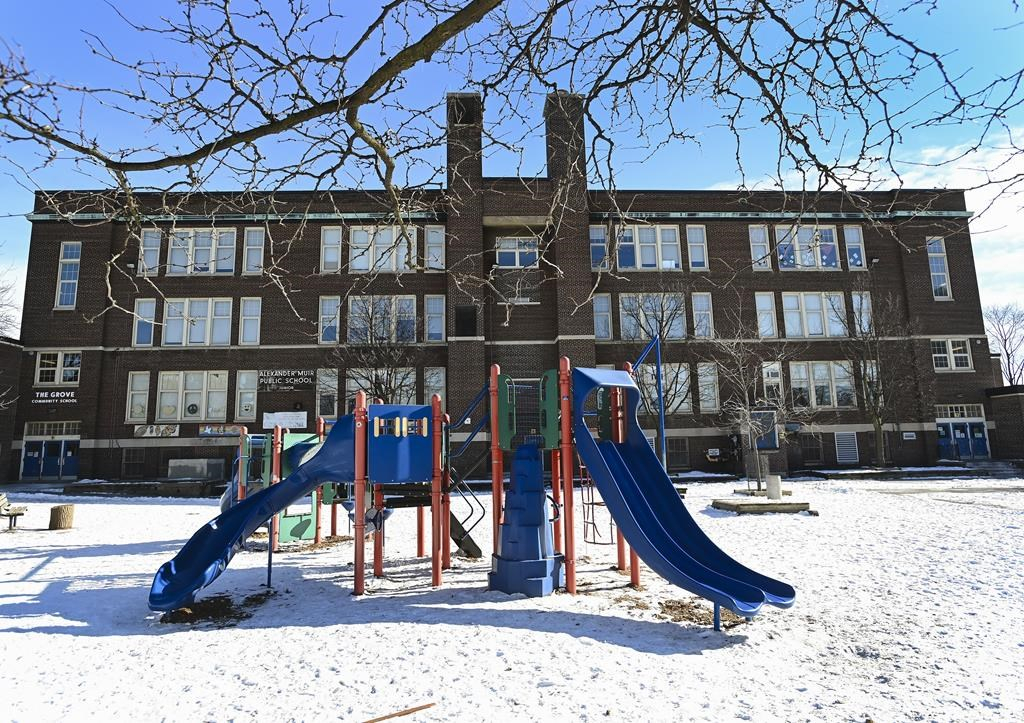 An empty playground in a schoolyard is shown during the COVID-19 pandemic in Toronto on Wednesday, Feb. 3, 2021. File photo by The Canadian Press/Nathan Denette
Previous story

Canadians in some parts of the country saw surgeries postponed, access to COVID-19 testing reduced and a return to classes delayed as provinces continued to struggle on Tuesday with a sustained wave of coronavirus cases and hospitalizations.

Ontario health officials said all surgeries deemed non-urgent will be delayed starting Wednesday as the province grapples with the dual pressures of rising admissions and increased staff absences.

Chris Simpson of Ontario Health, the agency overseeing the health system, said staff need to be redeployed to hospital wards dealing with shortages or to help admit people who are sick with COVID-19. More patient transfers are also likely to occur as hospitals reach capacity limits, he said.

"We need to be prepared for a period of time where the care that's being delivered is not the kind of care we would want to deliver," said Simpson, who added that authorities are doing everything possible to mitigate the risk.

While fewer people are experiencing COVID-19 pneumonia during the Omicron wave, many are being hospitalized for short stays or with chronic illnesses worsened by the infection, Simpson said.

COVID-19 cases and hospitalizations have been surging across the country, driven by the highly transmissible Omicron variant.

Quebec on Tuesday announced it was limiting access to COVID-19 PCR tests to "high-risk" individuals and was asking anyone with symptoms to stay home and isolate instead of seeking a test. The decision is meant to ensure that there are enough tests for vulnerable people, including hospital patients and care home residents in the face of unprecedented demand and expected supply shortages, a health official said.

The province also became the latest to reduce the recommended minimum isolation time for vaccinated individuals to five days from 10. Health-care workers in direct contact with patients will have to stay home for seven days before returning to work.

Dr. Marie-France Raynault, a strategic medical adviser to Quebec public health, told a technical briefing that, given the high levels of infection, a 10-day isolation period would "paralyze" society.

She said research suggests people are most contagious in the two days before they develop symptoms and in the two to three days after they appear.

Quebec reported a 196-person increase in the overall number of people hospitalized with COVID-19, as well as 21 more deaths linked to the pandemic.

Booster shots are seen as key to fighting the pandemic, and Prime Minister Justin Trudeau on Tuesday joined the growing ranks of Canadians who are rolling up their sleeves. He received a third shot at an Ottawa pharmacy and flashed a thumbs up as he urged Canadians to get vaccinated.

Ontario opened eligibility for booster shots to all residents 18 and older in mid-December, but Quebec has been slower to expand to the general population. Quebecers 55 and over became eligible to book appointments on Tuesday. The age limit is to drop gradually to include all adults by Jan. 21.

Saskatchewan, meanwhile, said it was opening up fourth doses to people who are immunocompromised, provided it has been three months since their third shot.

Many provinces have also chosen to delay the beginning of in-person schooling in the new year in an effort to limit the spread of Omicron.

Manitoba, which had already pushed back the post-holiday return to Jan. 10 from Jan. 6, announced that it was delaying that by another week. Remote classes are to begin next week, Premier Heather Stefanson said.

Alberta, which also delayed in-person classes until Jan. 10, made no further changes since its school announcement Thursday.

"I've said that every day our kids can remain in class is a small victory and I still believe that," said Premier Jason Kenney.

He said the government is prioritizing new shipments of rapid-test kits for families with children returning to school.

The active case count has grown to more than 34,000 in Alberta — the most recorded since the pandemic began. Kenney said the number is likely much higher considering about one in three Albertans are testing positive for COVID-19.

Prince Edward Island also announced that it will extend public health measures, including online learning in schools, until at least Jan. 17.

British Columbia delayed the return to school by one week after the winter break and provincial health officer Dr. Bonnie Henry said that will not be extended.

"We know that schools are safe and are essential for emotional and intellectual development," she said.

Henry also warned businesses, schools and health facilities to prepare for the possibility that as many as one-third of their staff could be out sick as the Omicron variant spreads quickly through the population.

— With files from Holly McKenzie-Sutter in Toronto, Jacob Serebrin in Montreal and Mia Rabson in Ottawa