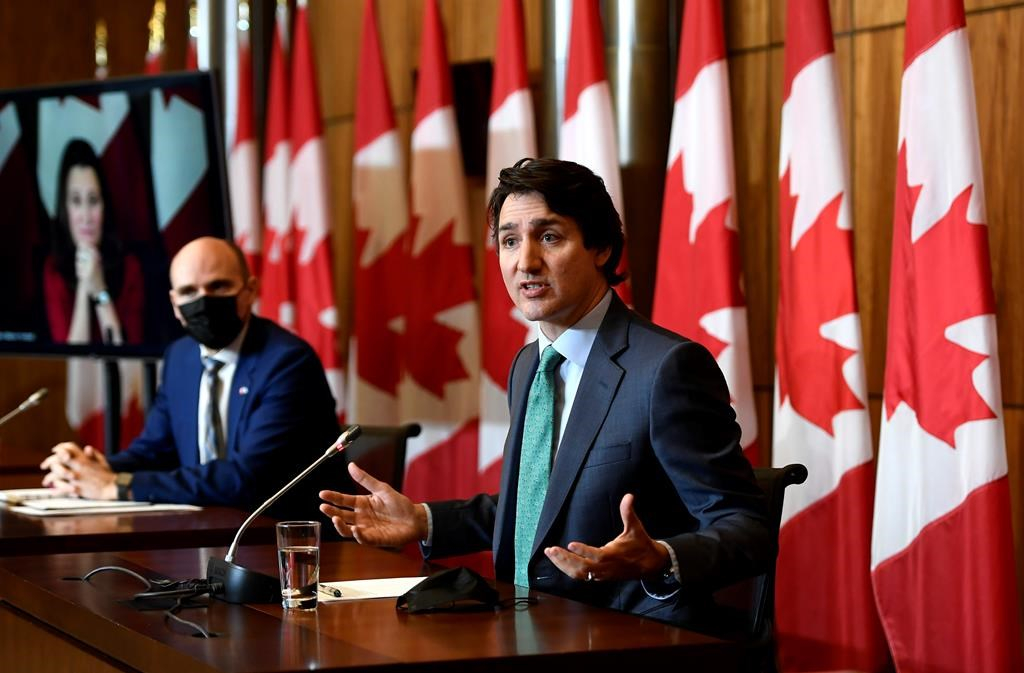 Justin Trudeau speaks as Jean-Yves Duclos and Chrystia Freeland, seen via videoconference, participate in a news conference on the COVID-19 pandemic in Ottawa, on Wednesday, Jan. 5, 2022. Photo by The Canadian Press/Justin Tang
Previous story

Federal officials are adding more COVID-19 rapid tests to Canada's arsenal as surging infections from the Omicron variant push some public sectors to the brink.

Health care is facing serious pressures around the country because front-line staff are unable to work as they wait for delayed test results or are isolating with infections. Other sectors, including education and recreation, are also noting significant staff shortages.

In Manitoba, the Winnipeg Police Service declared a state of emergency Wednesday. The service said 170 personnel were booked off on leave related to COVID-19.

Calgary police also warned of staffing pressures after 36 members tested positive and an additional 35 members were in isolation.

Ontario, Quebec and other provinces recently shortened the length of isolation periods for infected people by half to five days as a way to offset the impacts of similar staffing situations in a multitude of sectors.

Many jurisdictions are also looking to the swell of rapid tests expected to be delivered in the coming weeks to tackle the infectious Omicron variant while keeping the economy functioning.

Federal Health Minister Jean-Yves Duclos said 140 million tests are to be distributed to provinces and territories on a per-capita basis this month. That's four times the number delivered in December, he said, and would allow every Canadian to have one test per week in January.

However, each province is distributing the rapid tests differently and not everyone has the same access.

Ontario's pop-up model for rapid tests has been widely criticized for having long lines and not nearly enough supply. The situation has played out similarly in other provinces where there are significant delays to getting lab test results, but no widespread way to get or purchase rapid tests.

The federal Opposition accused the Liberal government of failing to get rapid tests to Canadians. Conservative Leader Erin O'Toole suggested Canada Post could have been used many months ago.

"Before Christmas, it was like the 'Hunger Games' trying to get a rapid test in Canada," O'Toole said during a Facebook Live Wednesday. "There should have been hundreds of millions of these tests being used already over the course of the last year."

Despite those concerns, distribution will remain up to provinces, Prime Minister Justin Trudeau said during the first federal COVID-19 update of the new year.

"Different regions in this country are facing very different situations," he said.

In a familiar routine, Ontario reintroduced restrictions Wednesday. Restaurants, gyms, cinemas and other indoor venues were forced to close, while retail stores and personal care services were limited to half capacity. Schools were closed provincewide and all non-urgent scheduled surgeries were halted.

Elsewhere, Quebec reported 39 more deaths and an increase of 158 hospitalizations for a total of 1,750.

Quebec Education Minister Jean-François Roberge said classes will resume on Jan. 17 as planned, but the province will distribute packages with five COVID-19 self-tests to all primary and secondary students in January and February to try to control infections in schools.

"Our schools are and will be safe," he said.

With regions of the country restricting molecular lab tests to prioritize high-risk people, including health workers, there is no telling how many COVID-19 cases there truly are in Canada. Dr. Theresa Tam, chief public health officer, said officials are still monitoring the spread of the virus and public health can still track trends and identify community spread.

"We are doing more daily tests than any other period during this pandemic," Tam said.

Trudeau said he understands people are frustrated as the country closes in on two years of the pandemic.

"There have been moments of more intensity and moments of less, but I think everyone was hoping we would be in a much better place right now," he said.

In fact, Trudeau added, things are different. Canadians are practised in what needs to be done to slow the virus's spread, vaccination rates are high and there will be a significant supply of rapid tests.

"There is no magic bullet on this. None of us want to be here right now, but we know what to do to get through it."

This report by The Canadian Press was first published Jan. 5, 2022.