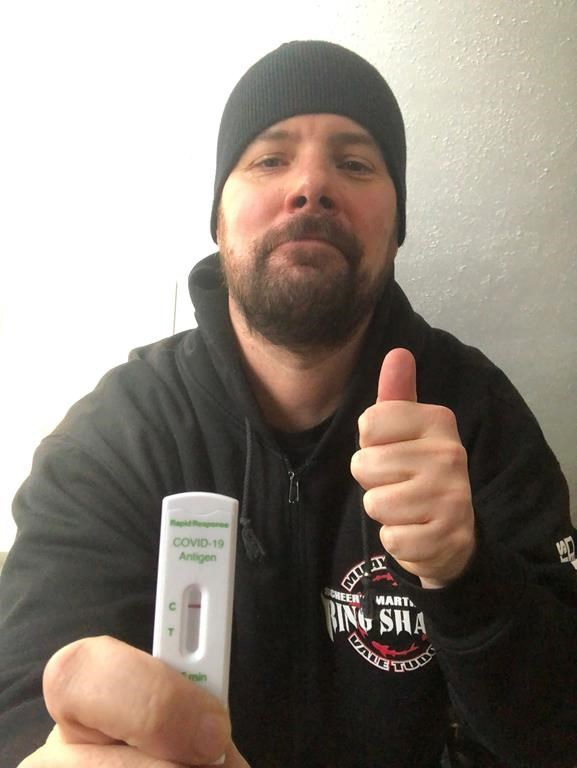 Troy Weppler, who lives in Saskatoon and is shown in this handout image, says he sent a box of five rapid tests to family members in British Columbia because they were unable to get any in that province. Handout Photo Canadian Press
Previous story

Troy Weppler says he turned away from a post office employee in Saskatoon as he shoved a box of COVID-19 rapid tests into an envelope to send to family in British Columbia.

"Why do I feel so guilty about doing this? Am I breaking any laws or is it just an ethical thing?" Weppler said as he recalled the moment during the holiday season when he felt like an outlaw.

"Everywhere I go I'm getting tests thrown at me, so why can't I throw a couple in an envelope and mail them out to family?"

Weppler is not the only person in Saskatchewan fielding family requests from across the country for the much sought-after tests. Walk into libraries, firehalls and some grocery stores and a smiling worker is likely to offer a kit with five tests.

Weppler was given his first box weeks ago when he went to cash in a lottery ticket. The employee told him he’d won $20 and a free play, then handed him the kit.

It's puzzling for most people elsewhere in Canada where the demand for tests vastly outweighs supply. Federal Conservative Leader Erin O'Toole compared the situation to the 'Hunger Games' movies earlier this week.

Federal Health Minister Jean-Yves Duclos has said that 140 million tests are to be distributed to provinces and territories on a per-capita basis this month. He said that would allow every Canadian to have one test per week in January.

But many are wondering if the uptick in supply will make a difference in being able to find rapid tests since each province, so far, has distributed them differently.

Ontario's pop-up model for rapid tests has been widely criticized. British Columbia’s provincial health officer, Dr. Bonnie Henry, had to assure residents earlier this week that tests were not being hoarded after growing public frustration.

The demand has only grown with the fast-spreading Omicron variant and with many provinces limiting the standard molecular lab tests to certain groups.

'Why do I feel so guilty?' Saskatchewan residents sending rapid tests out of province. #Covid19 #CDNPoli

"Why can they get them in ... grocery stores in Saskatchewan and why can't you get them here?" Scott Forbes asked.

The University of Winnipeg biology professor has a son who lives in Moose Jaw, Sask. He came home for the holiday season and was having some light cold symptoms, Forbes said.

Forbes said his son went to get a lab test in Winnipeg and waited in line for more than four hours. The family had heard that the results could be delayed by up to a week. Rapid tests were nowhere to be found.

"He knew he wouldn't get the test results for awhile ... so he called his girlfriend to ship out some rapid tests from Moose Jaw." Forbes said.

"She just picked them up from the grocery store and we had them the next day."

Forbes said his son tested negative and his symptoms quickly subsided. He still hasn't received results from the lab test.

The Saskatchewan government said this week that it has distributed over 12 million tests to about 600 sites. About 3.7 million of those were sent to communities through public distribution networks, including libraries and fire halls, starting in November.

The Manitoba government did not respond to a request for updated numbers of rapid tests.

Federal numbers from Dec. 17 indicate the province had been sent about 3.2 million tests. Saskatchewan had received more than 10.6 million tests, significantly more than its neighbours.

The federal numbers showed Ontario had received about 31.8 million tests and that almost 3.4 million had gone to British Columbia.

Saskatchewan officials have said they received more because they asked for more.

Forbessaid he wonders why other provincial governments didn't do the same.

Marlo Pritchard, president of the Saskatchewan Public Safety Agency, said he's optimistic Saskatchewan will continue to have a bounty of rapid tests despite the federal government signalling population will play a larger role in distribution.

The province expects four million tests in January and again in February, he added.

In Saskatoon, Weppler said if that's the case, he will consider making another clandestine journey to the post office to help family elsewhere.

— With files from Mickey Djuric in Regina