Vancouver Island prepares to slip and slide after snow dump 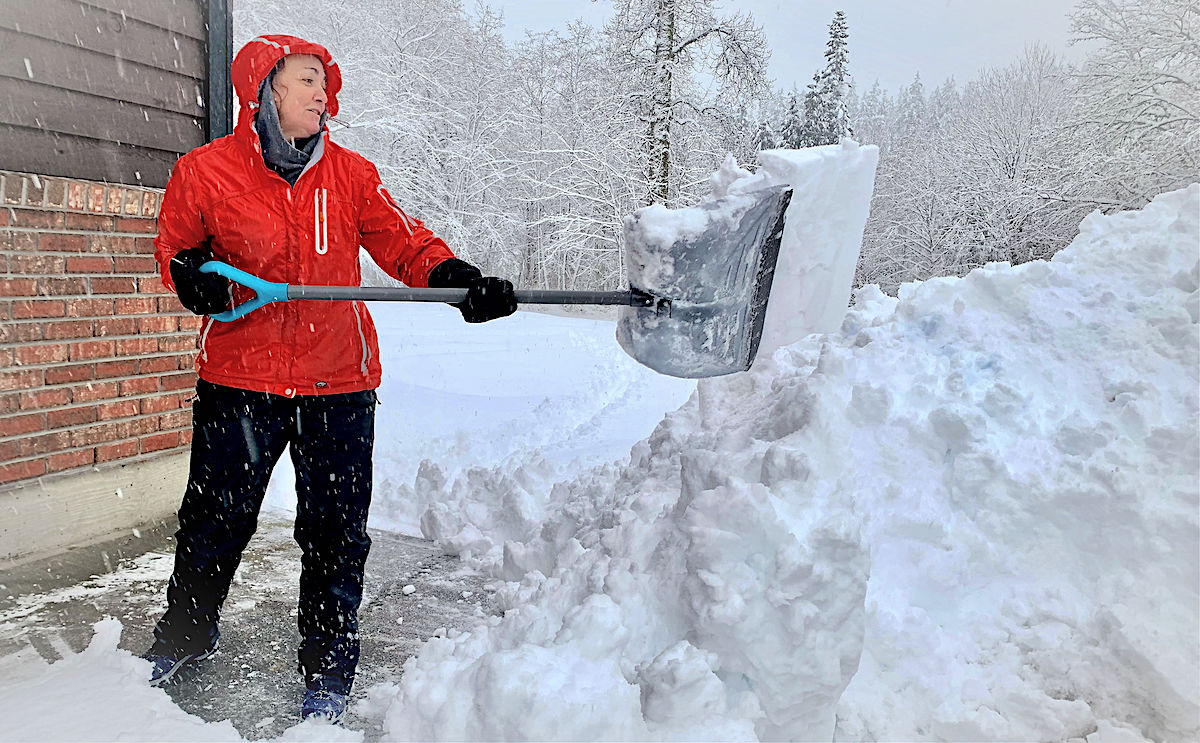 Colleen McDougall feels like she hasn’t slept since Christmas.

The Quadra Island resident works with a local company responsible for clearing snow from many of the public parking lots in the community.

Thursday she was shovelling pathways for the local bank after another storm hit the Vancouver Island region overnight, dumping at least a foot of snow.

“We’re clearing snow from the island for the umpteenth time this winter,” she said with a laugh.

“We’ve been up all night, starting at two this morning.”

The family business has been on the go since before Christmas to keep up. It’s been non-stop shovelling, plowing and salting almost 24/7, McDougall said.

While the amount of snow isn’t overly remarkable, the repeated storms accompanied by freezing weather is surprising.

“It usually doesn’t stay cold enough for the snow to last,” she said.

“It’s just been one storm after the other, with just a lovely bit of rain and ice in between to make it all really messy.”

On Wednesday, the Strathcona Regional District (SRD) launched emergency operations jointly with the villages of Tahsis and Zeballos, as well as the Ehattesaht/Chinehkint, Nuchatlaht and Ka:’yu:’k’t’h’/Che:k:tles7et’h’ First Nations to co-ordinate the delivery of essential goods and services including fuel, food and medications.

BC Hydro has been unable to helicopter in repair crews due to the poor weather, and the logging roads to the community are unsafe for travel, Koopman said.

An all-weather vehicle is headed to Zeballos and the Nuchatlaht community of Oculcje with essential medical items and food for the warming centre today, he said. As is a barge loaded with food and fuel donations from Grieg Seafood.

Tahsis has largely been without power since Jan. 1, while Zeballos lost electricity on Tuesday, Koopman said.

The continued heavy snowfall has caused extensive damage to the line serving the two villages, BC Hydro said in a statement Thursday afternoon.

The company surveyed damages by helicopter Wednesday, but repairs are dependent on crew safety and weather conditions, and the major repairs could be complete by Sunday, the utility company said.

Koopman said the small remote communities are pulling together to weather the conditions.

“Considering all the things being thrown at us in these unprecedented winter conditions, these communities are showing incredible resiliency,” he said.

“Whether they’re cooking in the warming centre or chopping wood for their neighbours, it’s just incredible.”

Most BC Ferries early morning sailings on Vancouver Island were cancelled Thursday as staff were delayed by road conditions.

Schools and post-secondary institutions across the island were also shut due to road conditions, although most K-12 students aren’t due back until Jan. 10 given the return to school after the holidays is delayed to curb the sharp rise of COVID-19 cases due to the Omicron variant.

Storm warnings for east and central Vancouver Island and the Malahat Highway were still in place as of Thursday afternoon.

Small amounts of snow mixed with freezing rain will continue to make road conditions difficult before things begin to warm up over the weekend, said Environment Canada meteorologist Brian Proctor.

And things might get a bit worse before they get better as freezing temperatures are also expected Friday night, he said.

But conditions will continue to improve for West Coast folks tired of the unusually snowy weather over the weekend as temperatures should warm until at least mid-week, Proctor said.

“So there’s brightness on the horizon starting on the weekend, but until then, it's just going to be slushy and messy.”