Less than half of Canada's promised vaccine donations delivered 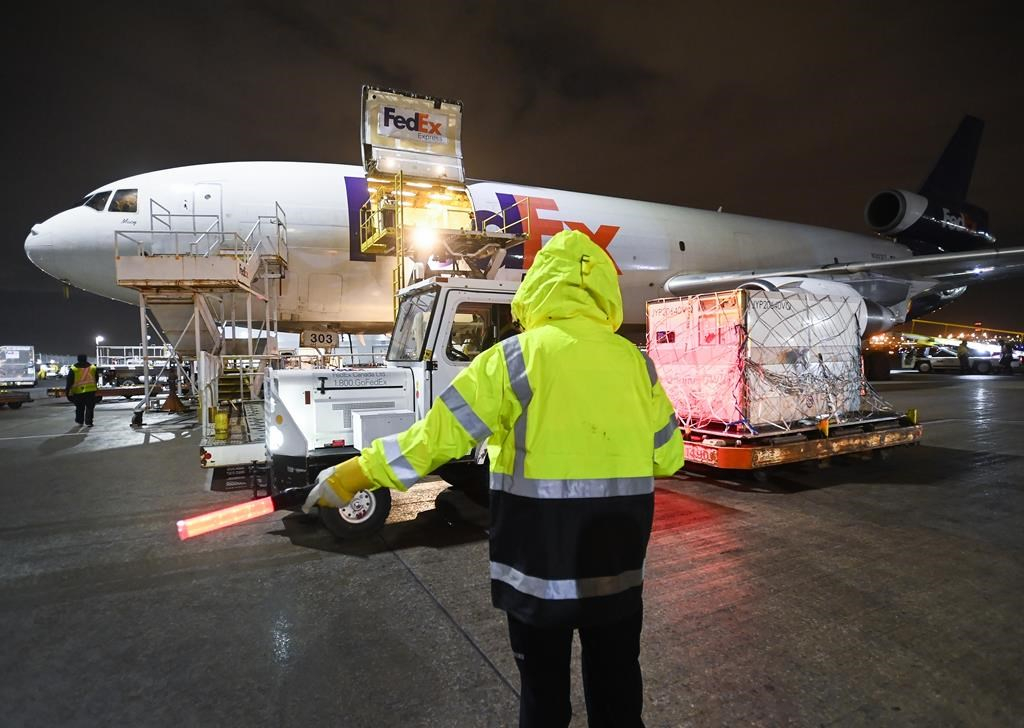 FedEx workers offload a plane carrying 255,600 doses of the Moderna COVID‑19 vaccine which came from Europe during the COVID-19 pandemic at Pearson International Airport in Toronto on Wed., March 24, 2021. File photo by The Canadian Press/Nathan Denette
Previous story
Next story

Canada has delivered about one-quarter of the direct vaccine doses it has promised to help less wealthy countries and can't say when more doses will go out the door.

In 2021, Canada promised to donate 50 million COVID-19 vaccine doses from its own contracts and at least 150 million more through financial contributions to the COVAX vaccine sharing alliance.

To date Canada has donated 12.7 million direct doses and $545 million in cash to buy 87 million more.

COVAX says it cannot yet report specifics on the doses purchased because it's still negotiating prices with vaccine makers.

Canada's promise was that all doses and cash donations would be delivered by the end of 2022, but critics, including World Health Organization Director General Tedros Adhanom Ghebreyesus, say countries like Canada have been hoarding vaccines at the expense of poorer countries.

Throughout 2021, experts warned that the more the virus that causes COVID-19 spreads, the faster it will mutate, potentially giving rise to a new variant that will evade vaccines already given.

That risk became reality in November with the discovery of Omicron, a variant with so many mutations it is causing millions of infections in fully vaccinated individuals. While the vaccines appear to be doing well against severe disease, the explosion in new cases has still stressed hospitals and sent Canadians back into the lockdowns and school closures they had hoped were behind them.

Prime Minister Justin Trudeau told The Canadian Press during a year-end interview in December, that Canada was "continuing to do more than our share" on vaccine donations.

"As people know, unfortunately, Canada no longer has a capacity to produce vaccines in our country so we don't have a domestic production that we can direct towards the world," he said.

More than half of Canada's promised #vaccine donations still to come. #CDNPoli #Covid19

"But what we are doing with the contracts and the vaccine supply we have secured from other countries, is send those vaccines that we purchased, that we paid for, that we're not going to be using, to the world."

Adam Houston, medical policy and advocacy officer at Doctors Without Borders Canada, said Canada is pulling its weight when it comes to monetary donations but can't say the same about vaccine donations.

He said Canada needs to put the same kind of pressure on the companies to deliver doses for donation, as it did to speed up deliveries to Canada last year.

"When these doses have been meant for Canadian arms Canada has frequently been able to move up the delivery of these doses," he said. "Somehow when the exact same doses from the exact same contracts are going elsewhere we don't seem to be having the same pounding on the table to make sure that the doses are getting to other people."

He also noted Canada allowed more than 10 million doses to sit in a federal stockpile for months, and almost as many in provincial freezers, instead of shipping them to places they could be used immediately.

"These doses could have been saving lives months and months ago," he said.

Canada turned to that stockpile in December when Omicron hit and booster campaigns took off. But Canada had already signed contracts with Pfizer and Moderna to deliver 65 and 35 million booster doses in 2022, and is also still owed at least 17 million doses from its 2021 contracts with Oxford-AstraZeneca and Johnson & Johnson, vaccines Canadians decided they didn't want.

COVAX hoped to deliver two billion doses to low and middle-income nations by the end of 2021 but managed less than half of that because of slow donations from wealthy countries and delays to deliveries directly from vaccine makers.

The WHO's target was to vaccinate 40 per cent of the population in every country by Dec. 31, but more than 90 countries missed that mark. At least 36 countries didn't even get to 10 per cent.

There is hope there will be more doses available in 2022 to ease the supply crunch with more vaccines ready for approval, including Novavax. Canada has a contract to buy 52 million doses of that vaccine and Houston said it needs to move quickly to donate all of them.