Help, we're about to be hit with climate change! 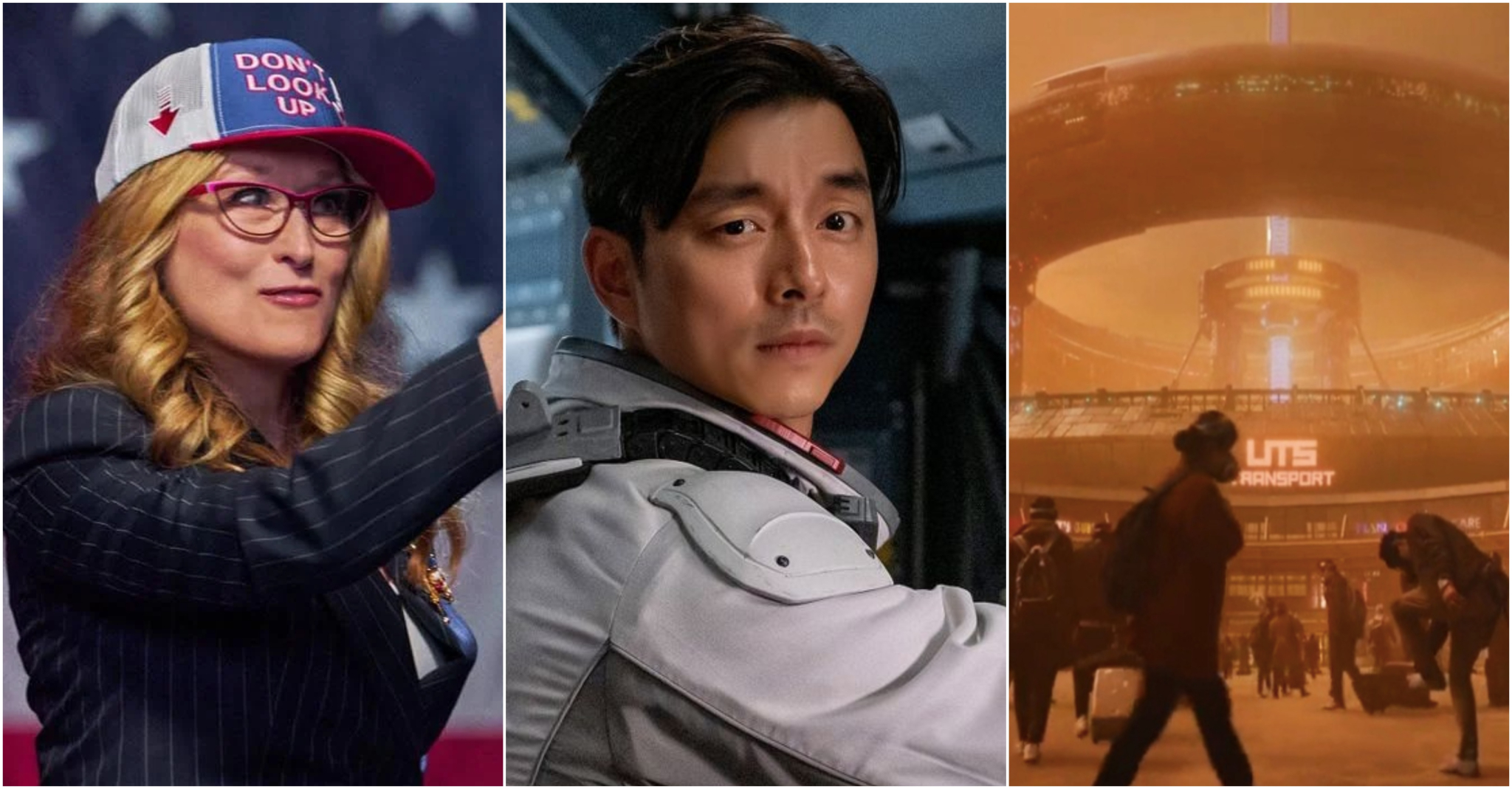 In the Netflix film Don’t Look Up, a giant comet spotted by scientists Randall Mindy (Leonardo DiCaprio) and Kate Dibiasky (Jennifer Lawrence) is a metaphor for climate change.

In the film, scientists warn about the global scale of catastrophe that will be caused by the comet hurtling toward Earth, and there’s just enough time and technology to avert disaster. But then, in a depressing sequence of events, we watch the world (mostly the U.S.) sabotage itself through greed and delusion.

Randall and Kate approach the narcissistic U.S. president, played brilliantly by Meryl Streep, and the mass media with their warning, but they’re either laughed off or sidelined by events ranging from a White House staff birthday to a celebrity marriage starring Ariana Grande and Kid Cudi.

Even well-intended, earnest efforts to confront the problem are fuelled by short-sighted ambitions to win the next election or raise stock prices.

Humanity's best chance to avert catastrophe goes sideways when a tech billionaire (played by Mark Rylance) decides mining the minerals on the giant comet could “make everyone rich” and “end poverty.” The critically flawed second attempt to stop the comet ends in failure, and by the movie's end, human civilization is done, with the possible lone survivor being a gender-swapped version of Ivanka Trump (which still means it’s done, by the way).

Climate pessimism in popular culture isn’t limited to Hollywood by any means.

The Silent Sea, a Korean Netflix series starring Gong Yoo, who many will recognize as the hot salesman in Squid Game, is based on the premise that humans have massively screwed up international climate policy and now suffer a severe shortage of water everywhere.

Water access is based on social rank in this fictionalized future South Korea — because, of course, despite how dramatically the Earth has changed, a stratified social structure has to remain intact. And while the streets teem with protests by citizens demanding equal access to water, the government has a top-secret mission to bring back water from the moon, of all places.

While there’s no direct correlation between these feelings of doom and current pop culture, stories about our future can “sway hearts and minds in profound ways,” writes @uechivo. #ClimateCrisis #EcoAngst #Netflix

Of course, insane circumstances ensue (with something like a fifth of the crew turning out to be corporate spies), and there’s a giant question hanging over the series: wWo's to say we wouldn't mismanage this new supply of space water when it came back to Earth?

Despite having developed enough technology to survive for years in space, the humans from The Silent Sea’s future are still clueless about sustainability, and there’s no indication the problems that caused the water crisis in the first place have really been addressed. It doesn’t bode well for lunar water, which also contains a scary secret that people may not want to know about.

The Silent Sea isn’t the only Korean Netflix series based on eco-apocalypse that came out in 2021; Space Sweepers also takes place in an irredeemably polluted future where “hope was extinct” for Earth’s remaining species.

In his entertaining podcast Star Talk, astrophysicist Neil deGrasse Tyson says the reason we presume the worst about aliens is that we’re projecting our own habits of raiding land, killing people and exploiting resources. He has a good point, since we have no solid evidence that aliens would do such things; it makes sense to us, because this is what we do to our Earth.

While this type of plot makes for entertaining TV, it’s depressing and not too inspiring for young people today dealing with the monumental task of actually solving climate change, which they can’t avoid or punt over to the next generation.

In a December study from Lancet Planetary Health, which surveyed 10,000 youth (aged16 to 25) in 10 countries (Australia, Brazil, Finland, France, India, Nigeria, Philippines, Portugal, the U.K., and the U.S.), respondents everywhere said they were worried about climate change and feeling “betrayal” from their governments’ ineffective response. They reported negative feelings about the climate crisis, including sadness, anxiety, anger, powerlessness, helplessness, and guilt.

“I grew up being afraid of drowning in my own bedroom,” said Mitzi Tan, a 23-year-old from the Philippines, in a statement accompanying the study. Three-quarters of those surveyed said the “future is frightening,” with more than half believing “humanity is doomed.”

‘A climate movie in which we don’t all die’

While there’s no direct correlation between these feelings of doom and current pop culture, stories about our future can “sway hearts and minds in profound ways,” with world leaders like Winston Churchill and Ronald Reagan actually taking inspiration from sci-fi writing in formulating their real-world policies.

It would provide some hope if more big-budget films and TV focused on reproducing a solutions-oriented vision of the Earth’s environment, which wasn’t all about dust clouds and water shortages and eating cockroach-coloured blocks of insect protein. Perhaps it could be a future more like that imagined by TV writers in the 1950s and1960s (before subsequent decades proved them wrong) — expansive, optimistic and thriving. Their heroes explored space not because Earth was trashed and they needed a new place to live, but in order to seek out new civilizations and make discoveries beyond the known universe.

“It’s time for a climate movie in which we don’t all die,” writes columnist Solitaire Townsend in Forbes last week.

“I hope Netflix is planning to follow Don’t Look Up with a big-budget adaptation of Kim Stanley Robinson’s astonishing The Ministry For The Future novel. It’s the most compelling, unputdownable story of facing into the solutions that I’ve ever come across,” she says.

“For once, I’d like to cheer the solutions of climate change, rather than darkly laugh at our response to it.”

Let's begin by refusing to

Let's begin by refusing to give up.......and finding as many ways as possible to change the trajectory we're on. With the evidence of extreme weather we've been seeing in the last few years, including our sense that extreme weather events are increasing and speeding up.......it doesn't look like denialism is working any longer..

Time now to join the resistance in any of the ways we can. It's not like there isn't lots to do.

Climate and Earth are side

Climate and Earth are side kicks and they are in dire trouble. We can do so much if Governments would listen to Indigenous Peoples who have been eons before us and can help us know more about the HOW.

An interesting movie that was around quite a while on TV is: "The Day After Tomorrow".
It seriously is about the results that can happen if we don't act now. Someone wanted to know if it was accurate and apparently it is pretty accurate, but is speeded up a bit. However, right now we are into the change Nature has been warning us about, as well as David Suzuki who also has been for decades.

Prophets and others and likely God is right in there in the many calls to act and right our balance with Nature. Nature is actually God's Creation and is active itself and in us. We are part of the ecosystem.
Thanks for the column. We CAN do this!

Not remotely accurate. Particularly the part about the -150C air coming down from the stratosphere. Do NOT watch "The Day After Tomorrow" for anything but entertainment.

The part where they have to decide which books in the NY public library to burn for warmth, and it's the law books, was funny. The boats floating down the 5th avenue were fun, too. But it has the scientific credibility of "2012", which was hugely entertaining, but involved "mutated neutrinos".

Climate change is a "Man vs

Climate change is a "Man vs Nature" story, not "Man vs Man", like most movies. "Man vs Nature", where every human being is on the same side, are very rare stories indeed, but popular, as "The Martian" attests.

Mostly, it's a huge engineering project, like building all those dams and the interstate highway system was for America in the Depression through the 1950s - a 30-year story of big construction projects that all link together into a new energy, extraction, and manufacturing system.

It's a hugely positive story. But --- good news is no news. Nobody will watch the movie about building a whole lot of wind and solar and new kinds of steel smelting and new kinds of agriculture with fewer nitrous gasses...unless you have some villains sabotaging them and needing to be shot.

Until this year, I wouldn't have believed a movie about terrorists who blew up wind turbine projects out of ideological commitment. Now I would.