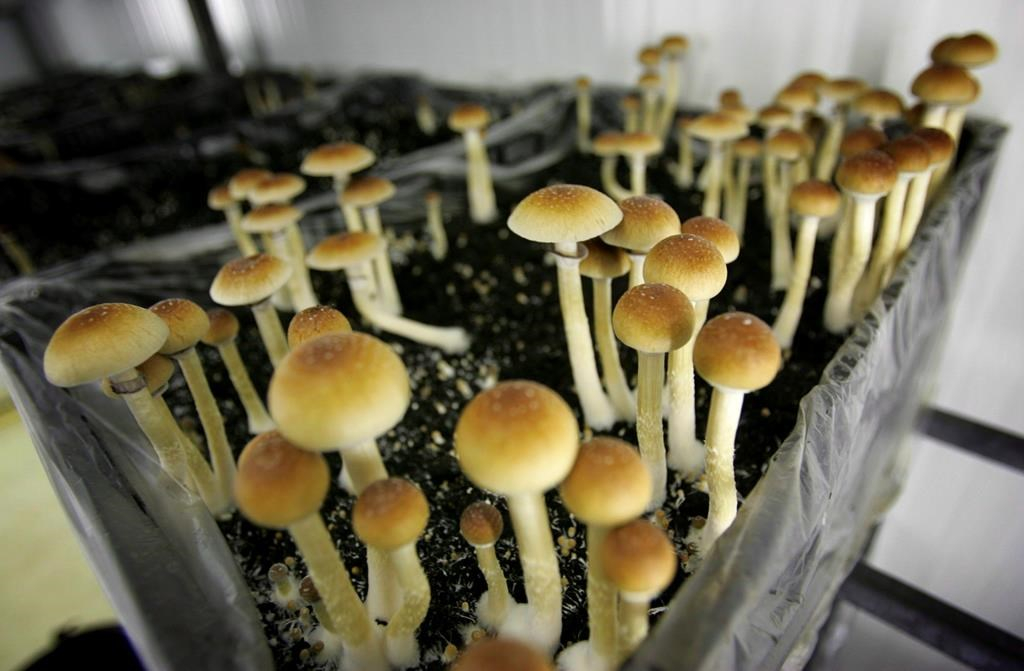 In this Aug. 3, 2007, file photo, psilocybin mushrooms are seen in a grow room at the Procare farm in Hazerswoude, central Netherlands. File photo by The Associated Press/Peter Dejong
Previous story

A doctor and a psychologist say Health Canada’s move to allow physicians to request restricted psychedelic drugs for patients as part of their psychotherapy is a positive step toward transforming mental-health care.

But they say the recent change to the Special Access Program isn't enough.

"We still have a huge amount of work to do because these medicines could really, really revolutionize the entire mental health-care field,” said Dr. Michael Verbora, who works as a medical director at the Field Trip Health therapy centre in Toronto.

"I don't want to get too far ahead of where the science is ... but I do really, really believe that if people have a process to start their own healing, it can lead to a much better world for most people."

Health Canada has said requests will be considered on a case-by-case basis for a "serious or life-threatening condition" and where other conventional treatments have failed, are unsuitable for the patient or are not available in Canada.

Verbora said the change isn't designed to have a wait list, because it's meant for emergencies. Health Canada has said applications will be processed within two days, but it's unclear when a decision would be made.

What it has done is streamline potential access to restricted drugs, Verbora said.

“Unfortunately, if you have a terminal illness, you don't have much life left in you. You don't have time to apply to the government and wait months to get an exemption.”

"This is the greatest leap forward in mental-health care since the invention of psychotherapy,” he said.

“I've used psychedelics many, many times. I didn't have a serious or life-threatening condition, but for my own personal problems and part of my own spiritual journey, these experiences have been life-changing.

Verbora, who filed his first application on behalf of a patient this week, said one of the biggest challenges is that more physicians need education on psychedelic therapy.

Ronan Levy, co-founder of Field Trip Health, said most applications except the most severe will probably be rejected.

He said he hopes Health Canada's criteria for approval of psychedelics expand in the future.

The government has said the regulatory amendment does not signal "an intent towards the decriminalization or legalization of restricted drugs."

However, that conversation needs to start, said Verbora.

"We have a long way to go to help the millions of people around the world that unfortunately suffer from mental-health issues and (their) growing burden."

All three men suggest that can happen by removing the stigma around psychedelics.

"When done in the right circumstances, with the proper oversight, with trained clinicians who can support the experience, the outcomes can be fantastic," Levy said.

"That leads to people who have greater emotional resilience, people who are more able to adapt to circumstances like a global pandemic."

This report by The Canadian Press was first published Jan. 15, 2022.

Does anyone else predict

Does anyone else predict psychs providing mind-altering drugs to their friends at parties?
"Spiritual development." Who'd'a thunk that was the purview of psychologiests. Or psychiatrists.
And how did they legally use prohibited drugs.
Just wondering.

STEP ONE:
I do not know about you, but I had my three shots. Still, I feel for people who insist on the right to informed consent.

I am struck by the brilliance of this global plan by Pfizer!

Pfizer chose Israel, with its riches and its aim to be the best, as a leader, likely to be copied.

Israel was the first country whose people were chosen to be vaccinated against Covid.

The development of this situation is predictable and fast:
In the unvaccinated South, the virus will evolve into untold variants. In the North there will be an unbroken demand for vaccines against those variants.

The philosopher Juergen Habermas calls it: Our ''colonization by private business''.

...to get back to the original topic of this article, I'm reminded of Dr. Gabor Mate, a retired family physician in Vancouver, B. C., who was reprimanded and banned by his professional group and the government from treating some of his patients who had psych issues with ayahuasca from south America. As is explained in this article, Dr. Mate exercised great caution and deliberance in these treatments and his patients enjoyed considerable success. The criteria of "right circumstances", "proper oversight", and "trained clinicians who support the expoerience" is exactly how Dr. Mate worked. Of course there will always be someone out there who abuses a good thing...
As for how Big Pharma arranges everything to it's advantage, that's capitalism for you.!!