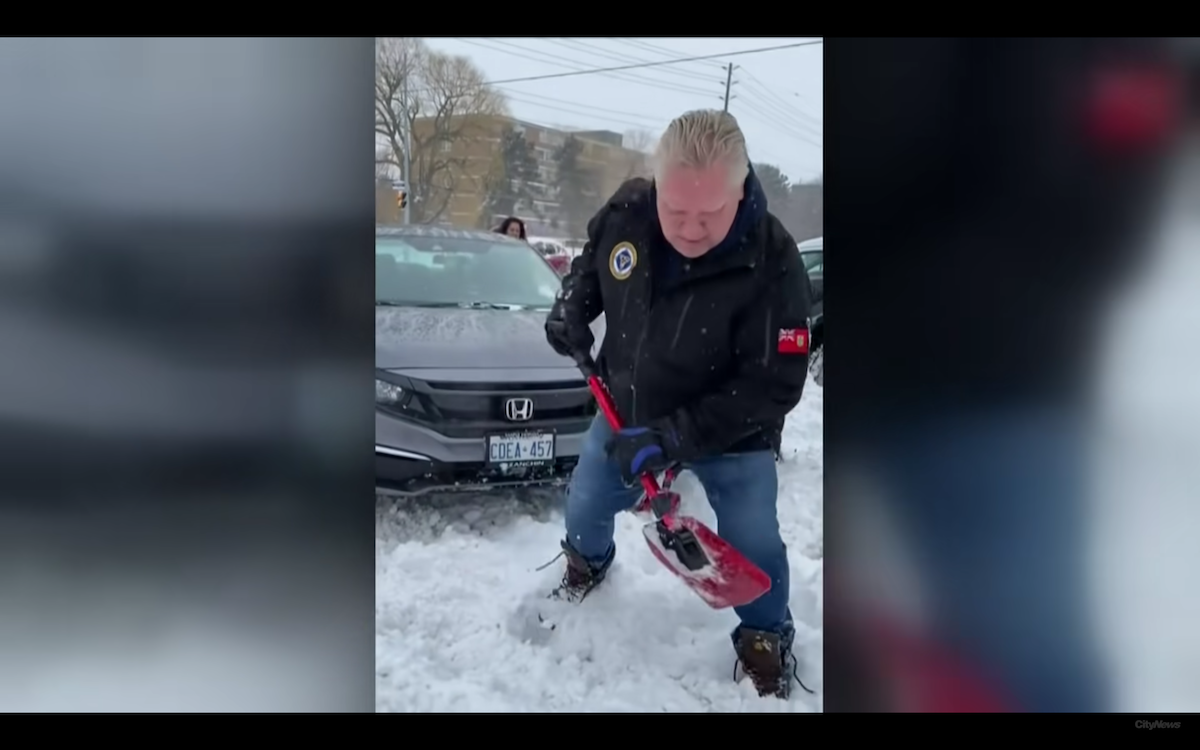 After months of avoiding media, Ontario Premier Doug Ford was happy to talk to reporters this week as he helped drivers get around in the snow, writes columnist Max Fawcett. Screenshot from CityNews / YouTube
Previous story

What do you do when there’s an election in a few months and only one-in-three voters approve of the job you’ve done? If you’re Doug Ford, you grab a child’s plastic shovel and treat the biggest snowstorm in your province’s recent memory as an opportunity for a photo op.

After spending months ducking and weaving from the media, Ford was more than happy to talk to them — including while he was behind the wheel of a moving vehicle — about his efforts to dig out stranded motorists. In the process, he showed just how easy it is to work the press, and why their gullibility might be key to his re-election plans.

It began with reporters like CTV’s Colin D’Mello dutifully amplifying his staged act of generosity like it was a legitimate news event. “Just been told that Premier Doug Ford is driving around Etobicoke helping stranded drivers,” he tweeted. “He’s helped pull one driver out of a ditch, and gave another driver a ride home.”

NEWSTALK1010’s Jerry Agar gave the premier an open line — and plenty of free publicity — to talk about his efforts, while CP24 carried him live (while he was driving) via FaceTime.

Most of the major outlets like Global and CTV ran online stories that included images provided by Ford’s official spokesperson, Ivana Yelich. And, of course, you had the columnists following up with their own in-kind contribution to his campaign. The Toronto Sun’s Joe Warmington, in his typically understated fashion, described Ford as a “one-man army in battle against the snow.” His column was dutifully retweeted by Brian Lilley, the Sun journalist who happens to be in a relationship with Ms. Yelich.

Not everyone was willing to carry the premier’s water for him, though.

On Breakfast Television, Sid Seixeiro tore a strip off the premier — and his professional colleagues. “This premier’s gone MIA for months during the darkest points of this pandemic, and the second he called every media outlet for attention on this, we followed him like lemmings,” he said. “It was disgusting. He used a disaster in this city, and a large part of this province, as a cheap political stunt.”

Seixeiro wasn’t done. “I was born, but not yesterday. I know exactly what that was, on a day where people needed legitimate help and he used it as a photo op, and I hope people saw that for what it was.”

What it was depends a lot on who you ask, though. While some saw an obviously staged (and crassly executed) stunt, others treated it like a shining example of Ford’s best political trait.

As writer Mat Vaillancourt tweeted, “That's Doug Ford trademark. And he does a lot of small things which are never made public.”

Opinion: While some saw an obviously staged (and crassly executed) stunt, others treated it like a shining example of Doug Ford’s best political trait, writes columnist @maxfawcett. #ONstorm #ONpoli

Never mind, for the moment, that he seemed more than happy to publicize this small thing, and managed to get a bunch of other small things — from engaging in distracted driving to ignoring the OPP’s request to stay off the roads — completely wrong.

Ford’s snowstorm stunt is just the latest example that he’s at his best (such as it is) when he’s engaged in this sort of small-scale retail politics.

The question that Ontario voters will have to answer is whether they want a premier who’s better at the small things than the big ones.

But the journalists who are tasked with covering Ford (and who are actually interested in doing that) have to be willing to frame that question properly — and challenge the framing his office offers up. If they can’t, they risk being turned into re-election campaign assets instead of journalists people should trust.

"Ford's snowstorm stunt is the latest example of ... small=scale retail politics". True. But it is also an example of "journalists" who are not. Sadly, mainstream media journalists are entertainers providing entertainment to viewers. Surely we are not so naive to think media and journalists are 'value free' and their reportage is accurate/honest/addressing real issues? We might easily place some alt-news "journalist/reporters" in the same category. Journalists all "carry water" for advertisers and political parties who best represent their ownership's political agenda. Hard hitting, balanced, investigative reporting went out long ago. For the CBC it started when the then National's 'anchor' urged Canadians to support the Meech Lake Accord. We are in a journalistic cesspool. "News" outlets often, very often, use "Opinion" pieces where journalistic 'integrity' might be an issue. For the record, I agree with the central point of this piece, but to say journalists "have to be willing to frame questions properly...or risk being turned into campaign assets rather than journalists." Please!

On Twitter the buzz I saw was that Ford was in a small, indoor space (vehicle) with a stranger not wearing a mask

Anyone who has regarded Ford

Anyone who has regarded Ford and his family with astonishment, as I have, from a prudent distance, must know that he is as cunning as a snake oil salesman. He and his caucus have been blowing smoke at Ontario voters now for far too long. Time to topple this clay footed sour joke.

His brain may be capable of small time acts of bonhomie and kindness but it is entirely incapable of anything but self interest, opportunism on the big issues.

And at least one person has

And at least one person has pointed out that the still of him with a tow-strap in front of a car is at least partially staged. The driver of the car in the picture is none other than one of his staff people. (Whether or not she was actually stuck is immaterial.)