Experts hopeful Omicron will end but worry about what comes next 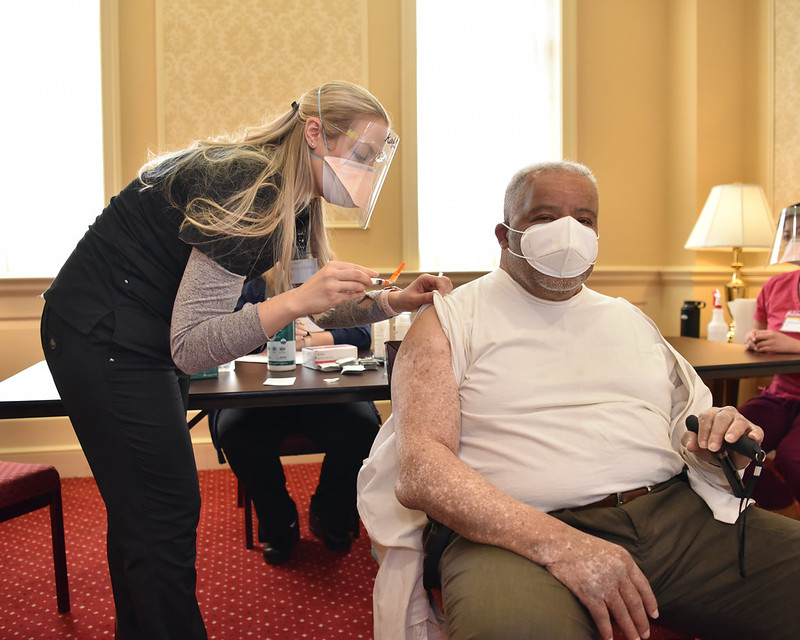 Photo of a vaccination station at a Maryland clinic. Photo by: Flickr/Maryland GovPics/Patrick Siebert
Previous story
Next story

VANCOUVER — The Omicron wave appears to be cresting across the country, but it's difficult to predict what's next for the pandemic, experts say.

Prof. Bernard Crespi, an evolutionary biologist at Simon Fraser University, said the development of the Omicron variant of COVID-19 gives clues as to what might come.

Omicron evolved to evade pre-existing immunity and reproduce at a much faster rate, he said.

"Those two are connected to one another because you can really only spread fast if the population does not have the immune defences against you," he said, referring to the Omicron variant.

Omicron burned through susceptible populations, leaving a higher level of natural immunity, he said in an interview.

It will be more difficult for the next variant to get a foothold in Canada because most people have immunity after being infected with Omicron, or they have been vaccinated, or a combination of both, Crespi said.

"All else being equal, the next variant and the next wave are more likely to be relatively mild."

"This pandemic, like all other pandemics before it, will end, but it is far too early to relax."

Health experts predict #Omicron will fizzle but are wary about the what's next. #varients #WHO #COVID

Omicron offers "plausible hope for stabilization and normalization" with the combination of immunity and vaccination, he said in a statement.

Canada's chief public health officer, Dr. Theresa Tam, said last week there are positive signs the Omicron wave is peaking, and now it's time for governments to "plan towards moving back to something that is nearer normalcy."

While the ability of a new mutation to spread might be impeded because of higher levels of immunity, Crespi said there is really no good way to accurately gauge virulence, a measure of how likely a variant is to put people in hospital or kill them.

Scientists can't predict the next variant because it depends on random events, including its mutations and where they come from, he said, pointing to the high level of genetic changes in the virus in people who have a weakened immune system.

There's always a possibility that some variant could come along that would spread like Omicron but end up worse, in terms of hospitalization and death, predominantly among the unvaccinated, he said.

Dr. Nelson Lee, interim director of the Institute for Pandemics at the University of Toronto's Dalla Lana School of Public Health, called the virus that causes COVID-19 unpredictable.

"There are people thinking that maybe the virus is evolving to a stage that it's getting mild and that it will cause really trivial disease that we can ignore," he said. "I disagree with that."

The impact of a large number of infections and hospitalizations is still significant, he said.

The coronavirus changes rapidly, as seen with its evolution from the Delta variant to Omicron, so it is hard to predict how it will mutate again, he said.

"We're just like a viruses' dream, in terms of our high density, our mobility and our non-centralized health-care systems."

Dr. Isaac Bogoch, an infectious diseases specialist at the University of Toronto, said different parts of the country are in various phases of the Omicron wave.

The declining infection rate can be measured through wastewater analysis, hospitalization numbers and modelling studies, he said.

While case counts decline or level off, that doesn't mean the danger has completely receded, because "you still have to come down the other side of the mountain, and it's a really tall mountain," he said.

The impact of the next variant can be blunted by a combination of vaccinations, masking and other public health guidelines, just as was done with Omicron, he said.

However, Crespi said it "gets stupid" to protect people with the original mRNA vaccine because that virus is "long, long gone."

"You're vaccinating against the ghost of a virus because people aren't going to get that anymore. They're going to get a virus that's quite different."

Instead, Lee said researchers may need to develop a pan-coronavirus vaccine with a broad spectrum that can provide more immunity against a variety of virus strains.

Crespi said the transition from pandemic to full endemic, such as the common cold, could take anywhere from a few years to perhaps dozens or hundreds of years, and the virus will likely still pack a punch.

"It'll probably be one that has harsh fangs and is quite dangerous for older people."

Rather than an endemic, Lee said he believes the virus that causes COVID-19 will transition to an epidemic with seasonal waves like the flu.

"It can cause hospitalizations, winter surges and a lot of appearances in the community," he said.

Crespi said moving to that scenario would have to come with a high rate of global vaccinations.

"What I can conclude is that it's hard to predict a timeline, but we are slowly moving toward the direction of epidemic disease."

This report by The Canadian Press was first published Feb. 2, 2022.