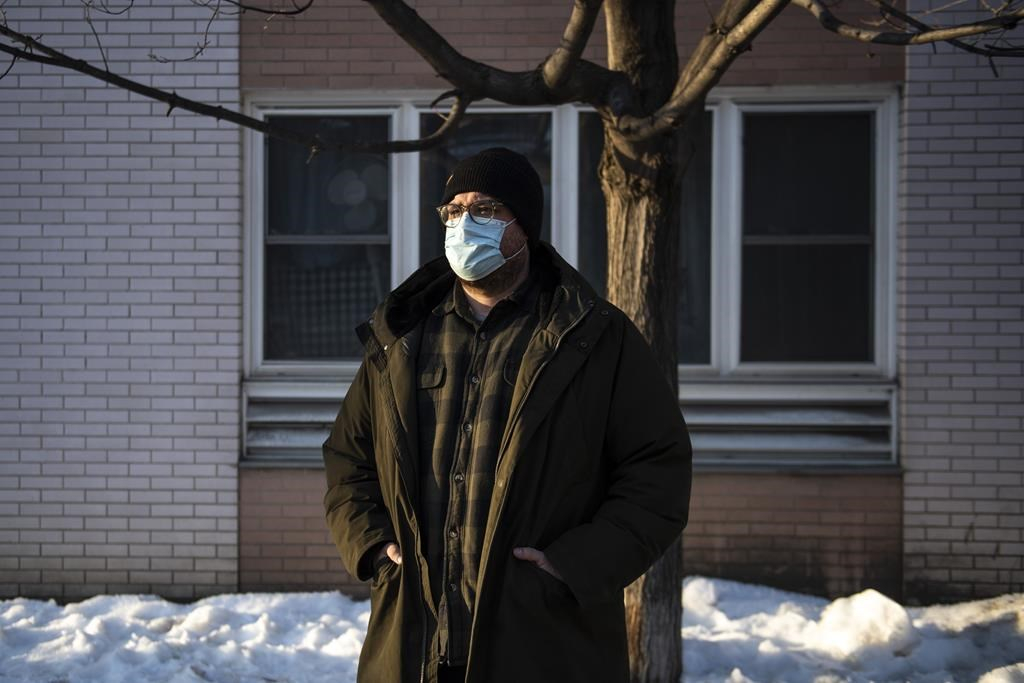 Matias Munoz stands outside his apartment on Lisgar Street, where police are investigating what appears to be an attempt to start a fire in the building’s lobby, in Ottawa, on Monday, Feb. 7, 2022. THE CANADIAN PRESS/Justin Tang
Previous story

OTTAWA — Police are investigating what appears to be an attempt to start a fire in the lobby of a downtown Ottawa apartment building, where tenants say they have been besieged by anti-vaccine mandate protesters raging in the national capital for more than a week.

Matias Munoz said that when he came downstairs Sunday morning, he saw the carpet and floor were charred, and that there were blackened fire-starter bricks strewn across the lobby.

The building manager showed him surveillance video, which he said appears to show two men light a package of the bricks in the lobby and secure the front door handles together before leaving through the side door around 5 a.m. Sunday.

The video also shows a different man enter the building and put the fire out a short while later, he said in an interview.

There are more than 100 units in the building, he said, and added that he can only imagine what would have happened if the fire had caught the wood panel walls nearby.

The building is just seven blocks south of Parliament Hill, and some residents said they were already at their wits' end with the constant noise from honking and fireworks at night, road blockages, reports of broken windows and harassment on the streets.

"On top of all that, somebody trying to do something as insidious as taping the door shut so people can't leave if there's a fire in the main lobby — it's terror, is what it is," Munoz said.

The fire came after a particularly rough Saturday night for the residents of the building and the protesters camped below, Munoz said.

“It sounded like a war zone out there,” he said.

Ottawa Mayor Jim Watson brought the investigation up as part of a special council meeting to address the ongoing demonstrations on Monday. He said the "horrific story" clearly demonstrates "the malicious intent of these protesters occupying our city."

The Ottawa Police Service arson unit is investigating. In a statement Monday afternoon, police said one or more people entered the building and started a fire using undisclosed materials.

Police said they are asking the public to help identify two people of interest. The statement did not mention the protest.

Steve Bell, the deputy police chief, told a briefing Monday that police had stepped up security in the area.

"We're absolutely dedicating resources and officers to be on the ground, walking those neighbourhoods to build back trust and confidence within those areas," Bell said.

Several residents in the building reported some kind of confrontation between the tenants and the demonstrators in the early morning hours. Some described people yelling down at the protesters from their windows.

One of the tenants, James Geling, said Monday there had been a number of confrontations between residents in the building and protesters, including one shortly before the fire was set.

He said that one started when a protester refused to stop honking around 3 a.m. on Sunday morning, which led to an argument.

"People in this building are so fed up," he said while standing in the hallway of the building.

"It feels lawless downtown. It feels like you can get away with anything."

Geling, who is a chef, said he came upon a couple of people in the lobby late Sunday night after walking his dogs. The people were shooting videos claiming the fire wasn't real, or that it was being blown out of proportion. Munoz had posted about the incident on Twitter Sunday evening.

Geling called the fire a "silly attempt," though he admitted the building "doesn't feel safe." He said he is worried that news of the attempted arson will make the building even more of a target.

Munoz also said he blames what has developed in downtown Ottawa.

"I don't know who it was that lit the fires, but to me, they are connected to the situation that the convoy has allowed to happen here in Ottawa," he said.

Residents of the building said the front doors do not lock.

The owner of the building was not immediately available for comment Monday.

Christina Braithwaite said she has lived in the apartment next to the elevators since September.

Her apartment is on the first floor and she said she has sometimes seen a woman sleeping in the hallways.

She says she slept through the incident on Sunday morning, when the two people captured on video walked past her door. She said she is unsettled by what happened.

"I didn't sleep much last night," she said, later adding: "I'm glad (the person who lit the fire) didn't know what he was doing."

Braithwaite says her friends have started joking that she must have a "guardian angel," as her previous apartment across the river in Gatineau, Que., was hit by a tornado in 2018 while she was away.

She says she doesn't regret moving to her current place, but adds: "If I hear another truck horn …"