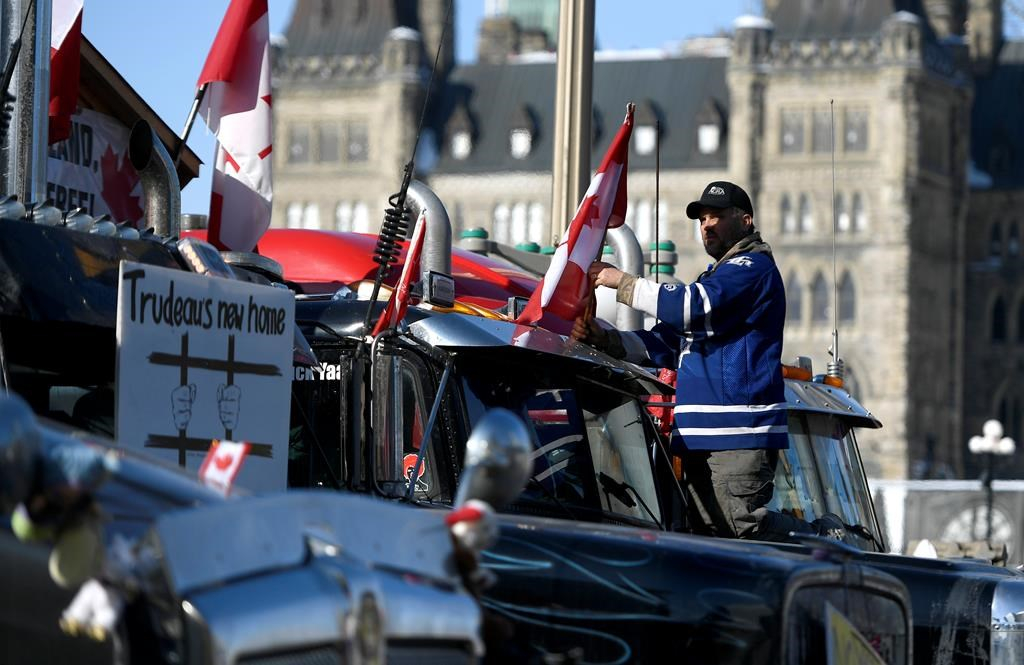 A protester affixes a flag to the top of their truck, parked beside a truck with a sign calling for the jailing of Prime Minister Justin Trudeau, outside Parliament Hill, on Feb. 7, 2022. Photo by The Canadian Press/Justin Tang
Previous story

Conservatives appear increasingly split over whether a protest against COVID-19 health restrictions in the nation's capital should stay or go.

Many Tory members of Parliament have pledged full support to the protesters, including recently elected interim leader Candice Bergen and Pierre Poilievre, the first candidate to announce his bid for party leadership.

Entering the House of Commons Tuesday, Alberta Conservative MP John Barlow says he doesn't think the protesters should leave and believes they have been respectful, adding some of his constituents are in the crowd.

"Let's put this in perspective. This isn't like you brought Ottawa to a screeching halt," he said.

"I live right downtown when I'm in Ottawa. I've managed to get to work. I haven't been kept up all night. Is it ideal? No. But this could be ended if the prime minister comes out and does his job."

Conservatives contend that protesters need to feel heard by Prime Minister Justin Trudeau and his Liberal government, which imposed vaccine mandates for domestic air travellers and those working in federally regulated industries. Both the demonstrators and Tories are steadfastly against these policies.

But Tom Marazzo, a self-declared spokesman of the protest, went further in terms of what he wants to see happen in a late-night news conference Monday, saying he wants to form a "coalition" with the Conservatives, NDP and Bloc Québécois.

"There are some misunderstandings about how things work," Barlow acknowledged on Tuesday.

A request for comment from Bergen's office about the ongoing protest wasn't returned by deadline.

Since protesters arrived nearly two weeks ago on Parliament Hill, the surrounding blocks have been clogged with idling semi-trucks and personal vehicles.

An Ontario court recently granted a 10-day injunction against protesting vehicles from honking their horns incessantly.

Nearby businesses have also chosen to shut their doors as there have been reports of abusive behaviour and flouting of COVID-19 public health rules by the demonstrators.

The protesters' refusal to leave has prompted pleas from Ottawa's mayor for more federal help and police resources and the city to declare a state of emergency.

Southern Ontario's Dean Allison is among the Conservative MPs championing the protest as a peaceful demonstration despite concerns from local leaders. He joined other the pro-convoy signatories, like Ontario MPP Randy Hillier on an open letter recently circulated on social media decrying a police decision to arrest anyone caught bringing fuel to protesting truckers.

Other Tories have stressed the need to uphold law and order, which is a value generally endorsed by Conservative supporters.

"It is time for the protesters to end the blockade in Ottawa," Ontario MP Michael Chong told the House of Commons during an emergency debate on the matter late Monday.

"Canadians do not have the right to harm other people or to interfere with the freedoms of their fellow citizens."

He added those involved have made their point and police should be the ones to decide when and how the illegal blockades are removed.

Calgary MP Greg McLean said earlier in the week on social media that he too feels the "Ottawa blockades" must end. He also wrote that he didn't intend to minimize the situation in a previous statement where he compared it to a winter carnival.

Since the convoy rolled into town two weeks ago, the Conservatives have begun searching for a new leader. Erin O'Toole, who struggled to articulate a clear position on the protest in one of his last acts as leader, was ousted by fellow MPs last week in a vote of 73 to 45.

Those involved in the convoy have expressed excitement about the candidacy of Poilievre, the longtime Ottawa-area Conservative and bombastic finance critic.

"I'm all about Pierre," said trucker Wendell Thorndyke, a party member, from inside the cabin of his truck.

This report by The Canadian Press was first published Feb. 8, 2022.