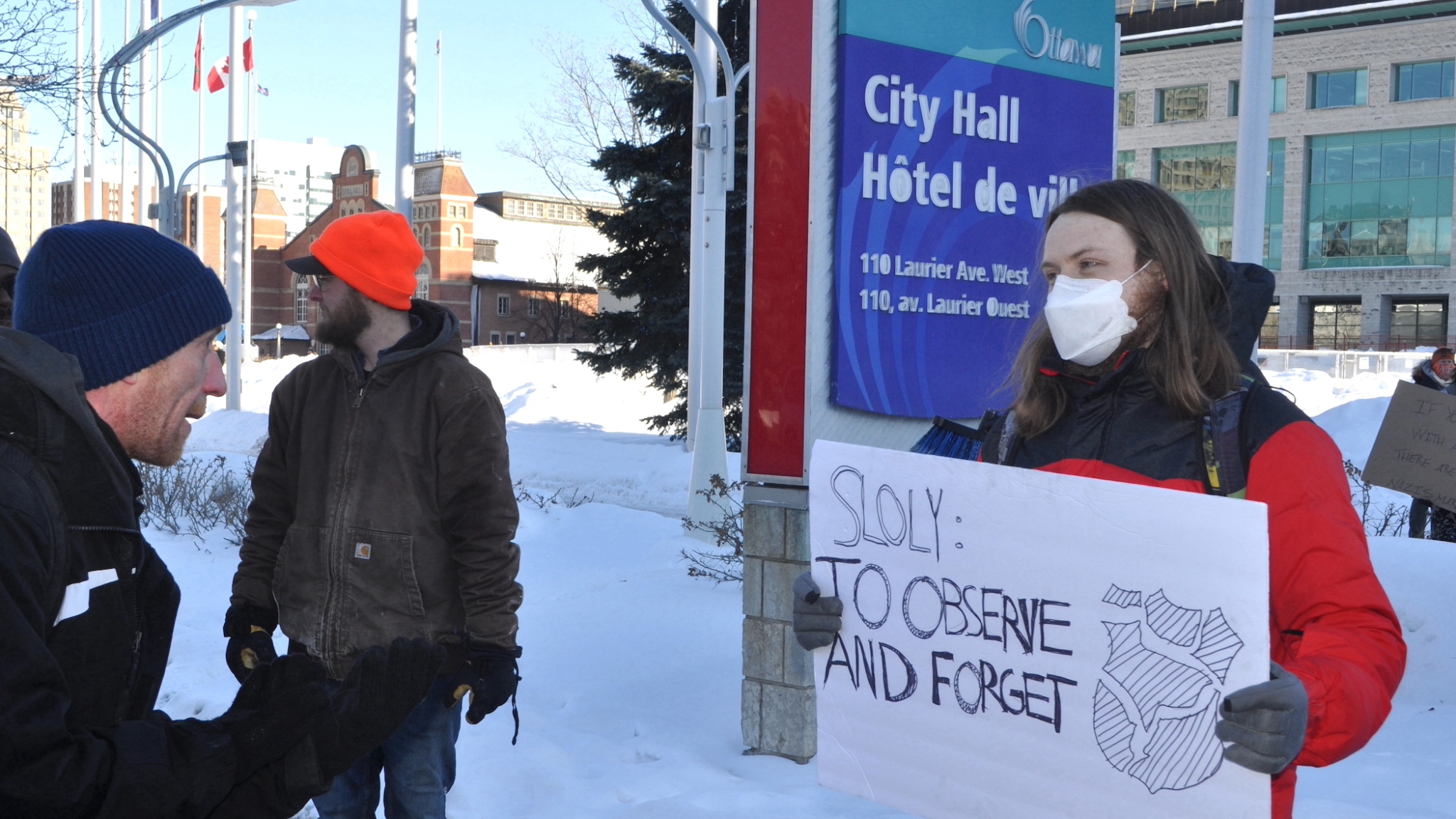 The Ottawa police department’s willingness to surrender the city to those protesters has made the best case for it yet, writes columnist Max Fawcett. Photo by Matteo Cimellaro
Previous story

For years now, activists across North America have pushed for local police forces to be defunded in the face of their persistent bias and discrimination towards marginalized communities. But their response to anti-vaccine protesters in the nation’s capital might actually make that happen. The Ottawa police department’s willingness to surrender the city to those protesters has made the best case for it yet.

Whether it’s police officers taking selfies with the protesters or watching passively as they carry fuel canisters past a supposed perimeter, there’s a growing inventory of evidence demonstrating a clear bias towards the protest. And as if to add insult to the growing list of injuries Ottawa has suffered over the last 10 days, the police chief hired a high-priced public relations firm to help him with “engagement support on the first weekend of the demonstrations.”

With policing costs chewing up nearly 10 per cent of the city’s overall budget, Ottawa residents have a right to ask what they’re getting for their money — and why police funding keeps going up.

They’re not the only ones. As the Globe and Mail reported in 2020, the cost of policing in Canadian cities ranges from 10 to 25 per cent of their overall budget, and it’s going up faster than other areas of spending. “Spending on police in Ontario, B.C. and Alberta is increasing at a faster rate than spending for other municipal services, a pattern experts say highlights the need for greater financial accountability.”

In Greater Toronto’s Peel Region, those costs have been as high as 40 cents out of every dollar spent, and while it’s an outlier, as Queen’s Park Briefing’s Jack Hauen noted, the cost of policing in Ontario is going up everywhere. “The OPP is getting nearly $213 million more than it was 10 years ago; the Toronto Police Service (TPS) now receives $150 million more; and the NRPS (Niagara Regional Police Service) is getting over $34 million more.”

Few people are seriously suggesting that we don’t need police forces or that they don’t have an important role to play in our society. But it’s clear police don’t have the skills, training or aptitude to handle some of the more sensitive social issues they’re often pressed into addressing, from mental illness and homelessness to substance abuse. By shifting some of the funding for police services into areas like social work and community outreach programs, we can actually deal with the issues at play and divert some of the people affected by them away from the criminal justice system.

Sandy Hudson, the co-founder of Black Lives Matter Canada, laid this out in a 2020 piece for Chatelaine. “Police services cost Canadians $15.1 billion per year,” she wrote. “If we were to defund the police, we could put that money into new services that would better serve our safety and security needs. We could afford to create front-line emergency services for mental health and sexual assault, along with investigation services — for murders, theft, violent crime — that do not fail as often as the police do. And we could create safety and security services that actually serve Black and Indigenous people rather than killing us.”

The idea that social work should be done by social workers shouldn’t be controversial, even though conservatives have managed to turn it into a wedge issue. But it’s the question of whether more policing leads to more safety that’s especially tricky.

As the Washington Post reported last year, a study of American data that stretches back to the 1960s shows it does not. “More spending in a year hasn’t significantly correlated to less crime or to more crime,” the Post’s Philip Bump writes. “For violent crime, in fact, the correlation between changes in crime rates and spending per person in 2018 dollars is almost zero.”

The challenge has been translating this sort of data into a winning political argument, and so far those pushing to defund the police have had mixed results.

Opinion: With policing costs chewing up nearly 10 per cent of the city’s overall budget, Ottawa residents have a right to ask what they’re getting for their money — and why police funding keeps going up, writes columnist @maxfawcett. #Convoy #COVID

In Edmonton, city council voted 8-5 to reduce their police force’s annual budget by $10.9 million, with that money going instead towards social outreach and support programs. But in Calgary, the plan to trim the city’s police budget by just 2.5 per cent was met with huge pushback from local conservative politicians, with then-mayoral candidate Jeromy Farkas describing the proposed cut as a “dangerous attempt to appease extremists.”

In the end, Calgary’s city council actually ended up increasing the funding allocation for the police. And in Vancouver, a modest $5.7 million cut to the local police department’s budget in 2021 was appealed to the province, which has yet to render a decision. But the blowback seems to have chastened Mayor Kennedy Stewart, who supported the VPD’s request for a $325-million budget in 2022 — almost $4 million more than his own finance team recommended.

Time will tell, but the politics around police funding may have shifted permanently after what has happened in Ottawa.

Canadians have seen the defiant indifference, and in some cases vocal support, offered by police to an occupation of their own city. They have watched as the RCMP in Alberta continues to allow a small group of rural agitators to block the border, disrupt trade with the United States and interfere with other people’s freedom of movement. And they cannot help but see the contrast between these responses and how police tend to crack down on protests involving environmentalists, Indigenous Peoples and other marginalized communities.

Those Canadians, and the elected officials that represent them, are going to have to ask some very fundamental questions. If the police are here to serve and protect, who are they serving and what are they protecting? And if they can’t, or won’t, do their jobs, isn’t it time to give some of their funding to people who will?

There you go! Old Max

There you go! Old Max Fawcett found another subject to stir the pot and feed the US AGAINST THEM pot. Max, however, does not answer any questions on his private network....

The identities of those

The identities of those stirring the pot are seen in Southern Alberta and Ottawa. But as Max says, their actions are initiating a long needed conversation about policing.

Problem is, "defund the

Problem is, "defund the police" is a sure-fire conversation stopper.

Defund in the wrong word or

Defund in the wrong word or one I would choose. Reallocation would be more accurate.

Fawcett knew it was the wrong

Fawcett knew it was the wrong word, and used it anyway. As clickbait.

I live in one of Canada's

I live in one of Canada's largest cities, moved here from another large city over 50 years ago and loved it so much, I stayed. I grew up knowing the local police officer, seeing him everyday. He knew most of us by name. Always there to turn to. But, I have to say watching the police receive more and more money giving less and less service over the years has been somewhat disturbing. As their funding increased, we would see them less often even during times when minor infractions began to increase. Police have not been on 'the beat', for a long time now, they are in cars and rarely do we know them. During COVID when everything went awry, many pedestrians, cyclists, drivers decided the rules were not meant for them and began defying most laws, bylaws, courtesies. Patience no longer exists in most instances. I live at a major intersection of the downtown core and many of us realized after the first year and a half, we had not seen one police car, never mind a police person. Finally, about 5 months ago, almost 2 years later, when people were now making all kinds of dangerous manoeuvres on the roads, pedestrians included, we saw our first police vehicle although nothing was done about the crazy activity going on but, still the vehicle was visible. When the rule makers and enforcers make themselves invisible, or openly disobey the laws, only chaos ensues. It's a known, proven fact. The police inaction and bias on many fronts whether local, provincial or federal have only themselves to blame for their once esteemed respect having slipped other than that given from friends and families of those officers.

In most civilized places,

In most civilized places, police exist to protect and serve.

That's pretty rich. You lot literally rewrite reality just to give yourselves a better "US AGAINST THEM" narrative, and then you bitch when people take you at your word. "No, no!" you squeal, "Just because we call people 'libtards' (even if they're socialists) and 'socialists' (even if they're liberals) doesn't mean anyone's allowed to be against us!!! That's so unreasonable!"
Meanwhile, you spend years squalling about law and order and then are aghast at the very idea of anyone arresting your people when they systematically break the law. "Freedom" apparently means the law doesn't apply to you--but ONLY you. Are you people ever going to figure out that sane people don't respect you when everything that comes out of your mouths directly contradicts what came out of them five minutes before?

I am intrigued by your ideas

Or maybe you can write for mine https://AlbertaNewsNow.ca/

I am intrigued by your ideas

Or maybe you can write for mine https://AlbertaNewsNow.ca/

" If the police are here to

" If the police are here to serve and protect, who are they serving and what are they protecting? And if they can’t, or won’t, do their jobs, isn’t it time to give some of their funding to people who will?"

Perhaps if they can't or won't do their jobs, they should lose those jobs. Perhaps there need to be citizen snitch-lines, a place for ppl to upload copies of evidence of failure to perform duties. Perhaps it's time that "we" stopped hiring individuals who can't be bothered to educate themselves as to what the laws and by-laws are, that they're required to enforce. Perhaps it's time we stopped hiring lawbreakers to enforce the law.