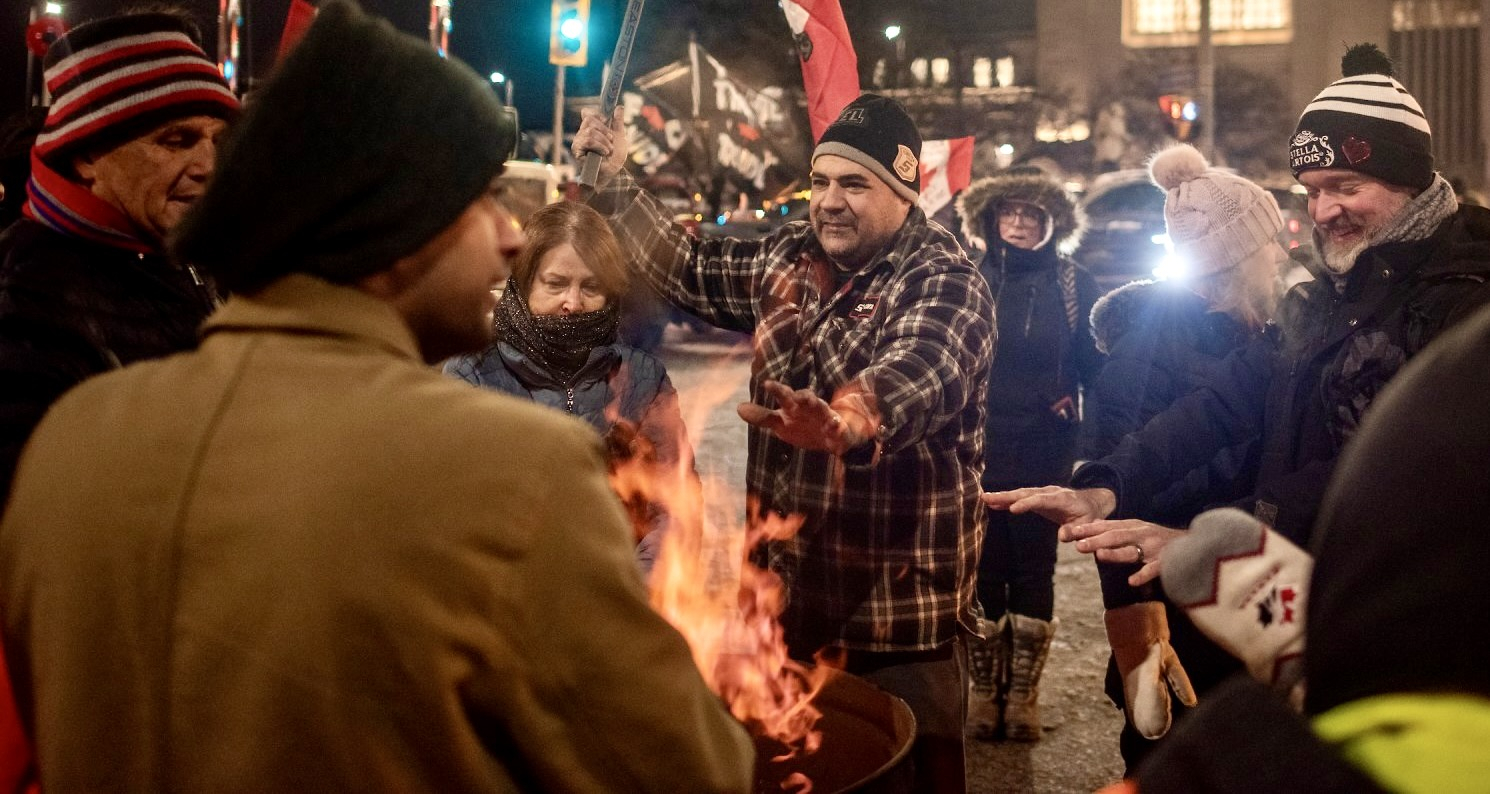 Protesters warm up around a burn barrel at the intersection of Rideau Street and Sussex Drive in Ottawa on Thursday, Feb. 3, 2022. Photo by Spencer Colby / National Observer
Previous story
Next story

Aginas flew from Coquitlam, B.C., to the capital to protest a vaccination mandate on cross-border truck drivers and other public health measures. Dubbed the “Freedom Convoy,” an estimated 5,000 Canadians from across the country have protested on the streets of Ottawa since Jan. 28.

Aginas — who says she is from the Alexis Nakota Sioux First Nation — is but one of many Black, Indigenous or people of colour (BIPOC) who have shown support for the convoy. Though she has had two doses of the COVID-19 vaccine, Aginas said she flew to the capital because she believes in body autonomy.

“For me, it's just a matter of choice. I respect everybody's decision to choose what they put in their body or don't put it in their body,” Aginas said. “I don't think it's right that people should be losing their jobs. It's really just creating hate.”

Though the convoy began as a pushback against vaccine mandates and other COVID-19 public health measures, it has faced mounting criticism over the display of hate symbols. Alongside signs promoting freedom and unity, protesters in Ottawa have displayed swastikas, Confederate flags and other white nationalist imagery, and a hate crime expert says convoy organizers may be tokenizing BIPOC protesters to build support.

Irfan Chaudhry, a hate crime researcher and director of the Office of Human Rights, Diversity and Equity at MacEwan University in Edmonton, says far-right groups — like Canada First — often attach themselves to protests around freedom, and protest organizers often play up diversity among participants to deflect accusations of hate or racism.

“(Protesters) claiming they're not being racist or discriminatory actually are by tokenizing people in communities of colour to highlight this and other racist protests,” Chaudhry said. “The challenge I always have is in why we have a (hate) symbol visibly present at these protests if there are not any forms of bias or discrimination.”

Some of the convoy’s organizers have a history of promoting white supremacist and racist views, Global News reports. The Canadian Anti-Hate Network has also documented some organizers’ past ties to far-right organizations.

In response to allegations of racism, protester Csaba Vizi told Fox News’ Jesse Watters earlier this month that he “had all kinds of friends.” Meanwhile, the Instagram account @poc4freedomconvoy collects social media posts from racialized people who purportedly support the protest and aims to “eliminate government overreach and dishonest media reporting.” (It is unclear who owns the account, as requests for comment went unanswered.)

When asked about the protest’s racist roots, Aginas said she did not see any discrimination.

“Honestly, it's been so positive,” Aginas said. “I haven't had any bad experiences here. Everybody's super friendly. Everybody has been pretty understanding and open.”

Byron, who would not share his last name for fear of harassment, agreed. An Indigenous man who says his heritage has links to the Little Red River Cree Nation, Byron drove from Edmonton, where he works as a 3D-printing technician, to protest the vaccination mandates even though he himself is vaccinated.

He said he saw no racism at the protest and was happy to see how the convoy united Canadians from across the country.

“Every walk of life I've met here. I have seen hardly any negativity, to tell you the truth,” Byron said. “It's just, it's fantastic. And as an Indigenous man, makes me proud to be fucking Canadian.”

Like Aginas, Byron opposed any vaccination mandates that set a precedent against body autonomy.

“It's sad that (truckers) are forced to take a jab in order to feed their family in a country that should be free,” Byron said.

While Edmonton has not mandated vaccination for public school students, Byron added he is cautious of the vaccine and worried his two daughters might someday have to be vaccinated to continue their education.

When Byron received shots of the Pfizer mRNA vaccine, he said he did not feel well for months and only improved after his elders put him on an exercise regimen and a healthier diet.

Health Canada states on its website that vaccines are safe and effective protection against COVID-19 and that minor side-effects are normal.

“If there is that discomfort around being forced and not consenting to putting something into their body, like a vaccine which they do not consent to, then regardless of your background, you'd likely be able to find like-minded peers,” he said.

However, multiple First Nations and Inuit organizations have expressed their disapproval of the “Freedom Convoy” and protesters' claims of inclusivity. This includes the elected Algonquin leaders on whose territory the Ottawa protests have taken place.

After a Feb. 2 pipe ceremony led by JD Anderson, an Indigenous man from Manitoba, took place on unceded Kitigan Zibi Anishinabeg land, elected chiefs of the Algonquin Nation were quick to distance themselves from the ceremony. That same day, they issued a joint press release stating it was unsanctioned.

“The Algonquin Nation does not support the setup of a teepee, the pipe ceremony and a sacred fire in Confederation Park in support of the ‘Freedom Convoy’,” read the statement signed by Whiteduck, elected chief Wendy Jocko of the Algonquins of Pikawakangan and grand chief of the Algonquin Anishinabeg Nation Tribal Council Savanna Mcgregor.

“The Algonquin Nation did not give consent for these ceremonial practices and could cause more harm to who we are as First Nations/Algonquin people.”

Pat King, a vocal promoter of the protest with a history of racist social media posts, livestreamed the event to Facebook. Following the elders' statement, he later posted an apology but went on to suggest the convoy still has broad support from Indigenous people.

Chaudhry said highlighting BIPOC participation in the protests to avoid being called racist is discriminatory tokenism.

“Tokenism is being funnelled through these protests,” Chaudhry said. “The people who are claiming they're not being racist or discriminatory actually are, in another, more subtle way, by tokenizing people in communities of colour.”

For racialized locals, the convoy has prompted a range of experiences. Rabih Haddad, owner of Deli Kat Café on Sparks Street, has kept his Lebanese-Canadian cafeteria open throughout the protest, which he says has been good for business.

“I've never seen such kindness. (Protesters) are super kind, super nice,” Haddad said. “No one entered the cafeteria who was racist or who's looking for trouble.”

But other businesses have not shared the same fate.

A Happy Goat Coffee Company shop on Elgin Street with a Pride flag in its storefront had its window smashed on Feb. 3. Moo Shu Ice Cream in Centretown tweeted that a member of its staff was assaulted for wearing a mask. According to CTV, the Ottawa police hotline to report hate crimes has received more than 200 calls during the protest.

“The hatred, the violence and the illegal acts that Ottawa residences and businesses have endured over the last week is unacceptable in any circumstance,” Sloly said.

Byron said he hadn’t witnessed that and felt his long drive from Edmonton was worthwhile. He insisted the convoy sparked meaningful discussion between himself and other protesters.

“I made it a personal mission to go for a drive through Ottawa here and meet the locals wearing masks,” Byron said. “I was asking them questions and seeing how they feel. (Some) feel pretty good about what's happening. But also, at the same time, some don't.”

Aginas, who spent two days participating in the protest, said she never once felt like a token. She viewed her participation as helping to create a dialogue about BIPOC issues, noting her orange “Every Child Matters” shirt was a reminder that the movement is really about the future of Canada.

“People are seeing my shirt and they're stopping to say, ‘Yes, we support that as well.’ That creates conversation among those citizens,” Aginas said. “We can express our viewpoints to each other. That's all we're doing, is we're hearing each other out.”

— With files from Spencer Colby

No, anti-vaxxers — your freedoms aren’t in jeopardy

Please don't be sloppy with

Please don't be sloppy with statistics. You know better.
You say "the Ottawa police hotline to report hate crimes has received
more than 200 calls during the protest."
That number is meaningless unless you also give the number of calls
received outside of the protest and compare them.
Thousands of people are members of the Flat Earth Society. So what?
Literally billions of people are not members.
Absolute numbers are misleading. Don't do that.

Wow, it's great to see all

Wow, it's great to see all these protestors, from all walks of life, calling for easier access to abortions! I can get behind that message!

Another reporter determined to follow a misleading narrative by Trudeau's MSM. The reporters own experience and interviews indicate no signs of the false narrative yet still refers to the protest as racists. The situation of a broken window and mask assault no doubt did happen but no definite link to the protestors. Also no mention of all the videos showing protestors escorting the couple of racist/supremist symbol carriers away. No mention of the positive response to the negative situations that happened to statues and the homeless shelter.
Very intentional misleading by omission by a paid off media to follow a false narrative by a coward of a leader.
We will not forget these lies. MSM credibility has been lost.

No definite link to

No definite link to protestors who were allegedly praised by the cafeteria guy either. But we know, it's okay when your people do it, right?

I like this sign that went up at the side of the road on Salt Spring Island where I live: "Funny thing -- there weren't any swastikas at Fairy Creek."