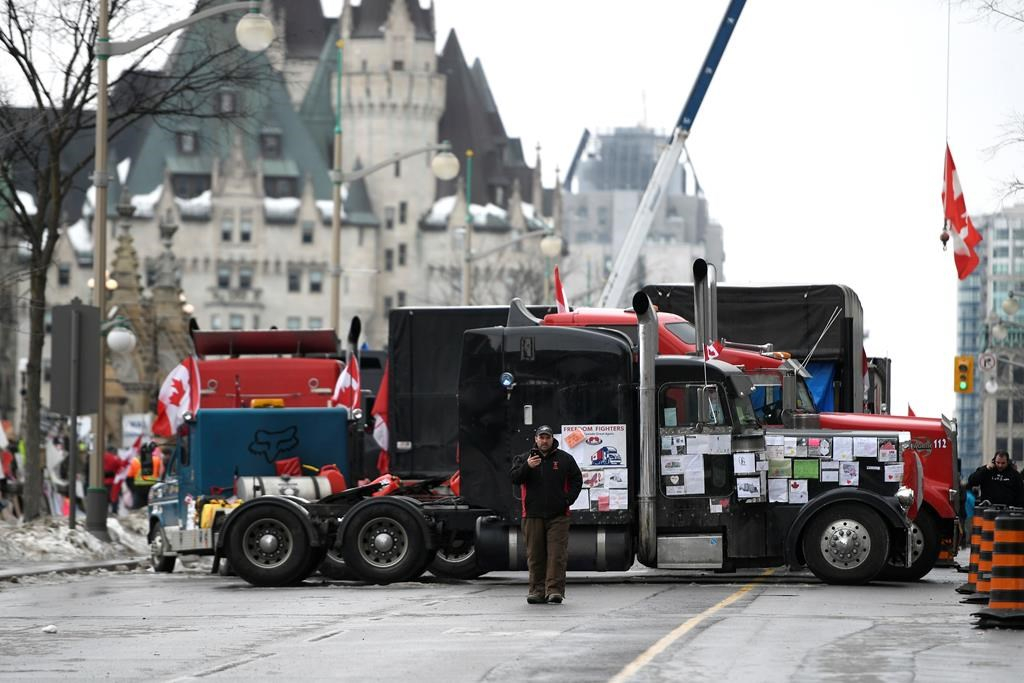 Trucks, now parked perpendicular to Wellington Street, are seen in front of the Chateau Laurier as a protest against COVID-19 restrictions continues on Thursday, Feb. 10, 2022. Photo by The Canadian Press/Justin Tang
Previous story
Next story

The Ontario government says it has successfully petitioned a court to freeze access to millions of dollars donated through online fundraising platform GiveSendGo to the convoy protesting COVID-19 restrictions in Ottawa and at several border crossings.

The province obtained an order from the Superior Court of Justice that prohibits anyone from distributing donations made through the website's "Freedom Convoy 2022" and "Adopt-a-Trucker" campaign pages, said a spokeswoman for Premier Doug Ford.

Ivana Yelich said the order binding "any and all parties with possession or control over these donations" was issued Thursday afternoon. She cited a section of the Criminal Code that allows the attorney general to apply for a restraint order against any "offence-related property."

Donors initially raised more than $10 million through GoFundMe, which announced last Friday it was pulling the plug on the campaign and that the money would be refunded. The site said it initially believed the demonstration was going to be peaceful, but withdrew its support after police and local leaders raised concerns it had become an "occupation."

Convoy organizers quickly set up new campaigns on Christian fundraising site GiveSendGo. As of Thursday, "Freedom Convoy 2022" had raised $US8.4 million and "Adopt-a-Trucker" had amassed more than $686,000.

GiveSendGo posted a statement on Twitter Thursday night about its "Freedom Convoy" campaign.

"Know this! Canada has absolutely ZERO jurisdiction over how we manage our funds here at GiveSendGo," it said.

"All funds for EVERY campaign on GiveSendGo flow directly to the recipients of those campaigns, not least of which is The Freedom Convoy campaign."

Know this! Canada has absolutely ZERO jurisdiction over how we manage our funds here at GiveSendGo. All funds for EVERY campaign on GiveSendGo flow directly to the recipients of those campaigns, not least of which is The Freedom Convoy campaign.

Organizers have also touted the cryptocurrency Bitcoin as another way to generate funds for protesters and avoid other potential fundraising shutdowns, including during a news conference that was livestreamed to supporters on Wednesday.

Ontario's move to freeze access to the donations comes the same day as an all-party House of Commons committee of MPs heard testimony from deputy directors of Canada's financial intelligence hub about how it doesn't cover crowdfunding sites like GoFundMe.

Fintrac has a mandate to identify money linked to terrorist financing and money laundering from reports it receives each year from entities including banks, insurance companies, money service businesses and casinos.

It doesn't investigate potential crimes or stop money from flowing, but passes its intelligence onto police.

Fintrac deputy director Barry MacKillop testified that it doesn't regulate crowdfunding sites like GoFundMe and so wouldn't receive from it reports of suspicious transactions.

The payment services that users rely on to send money to crowdfunding campaigns, like PayPal, and the banks that in turn deposit the cash do fall under is reporting requirements, the MPs heard.

"The intersection with the crowdfunding platforms and our financial institutions is a must in order to disperse the money," he said.

"If the money were going through a Canadian bank, for example, and directed to the Proud Boys — they're a listed terrorist organization. That money would be stopped by the bank."

Annette Ryan, another deputy director at Fintrac, testified this gives them a line of sight into the crowdfunding sector.

At the outset, MacKillop said Fintrac doesn't discuss intelligence disclosures made to police. But when it comes to the protest unfolding in Ottawa, he said there hasn't been an upswing in suspicious transactions being reported.

Among one of the questions MPs had about the millions being generated for protesters through crowdfunding sites was the appearance funds were being sent anonymously.

MacKillop says while the public may not get to see who is making donations, that doesn't make them anonymous.

He pointed out donors must use credit cards to send money and the fact that GoFundMe offered up refunds after it shut down the protesters' campaign demonstrates it has the information it needs to identify an individual.

Earlier Thursday, NDP MP Alistair MacGregor announced the committee would hear directly from representatives from GoFundMe about what measures it has in place to prevent the funding of extremism.

MacGregor brought forward the motion and said they will appear March 3.

After reading this, I am

After reading this, I am still left to wonder how the court order will be effected. Individual accounts at banks under Canadian jurisdiction would have to be flagged then transfers scrutinized. It seems there are easy workarounds. It's not as easy a decision to effect, I don't think (?), as it was, for example, for various payment agencies to prevent donations to WikiLeaks a few years back. For example, if GiveSendGo was of a mind (their tweet suggesting they might be) they could obtain a list of credit card numbers from protest organizers with instructions to make payments to those cards. So, unless those individual card accounts are also flagged, and happen to have been issued by institutions under, or cooperating with, Canadian jurisdiction, how can those cards be blocked from making purchases to aid the occupiers and funds raised by GiveSendGo used to pay off, from some non-Canadian location, real or virtual, the balances. It's not clear to me. Can GiveSendGo be blocked from making payments to out of jurisdiction accounts? Can/Will American institutions cooperate in blocking transfers to identified accounts? Etc.

I appreciate the diligence of the reporter in getting various points of view from fintrac contacts, but some specific examples posited, such as the one above, may have been useful. The examples given aren't rocket science so I hardly think I've let the cat out of the bag.

As a society we really need to have a talk about what defines our core values and what enforceable limits we want to place on Internet-enabled subversion (i.e. avoidance or corruption of law) -- I don't think that's too strong -- of our democracy. It can be "fun" to feel like we're naughty and getting away with something, from time to time, but when it becomes organized and endemic within a society, it can only be equated to an infestation of carpenter ants gnawing away the bones of a beautiful home.