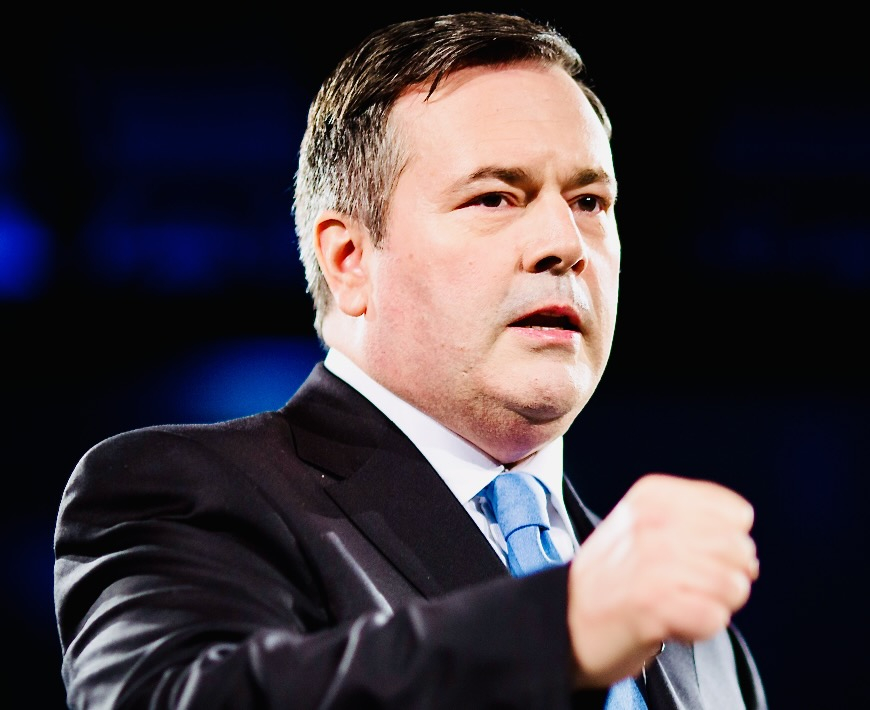 Jason Kenney has now established a clear precedent in Alberta: if you don’t like the government’s policy, shut down a major road until they change it. File photo by Alex Tetrault
Previous story

Nature may abhor a vacuum, but chaos absolutely loves it. So, too, does the convoy of “truckers” — more a ragtag collection of farmers and other rural Albertans — who have occupied the border crossing in Coutts, Alta., for more than five days now, defying both the local police and half-hearted disapproval of the UCP government.

If anything, they’ve been emboldened by the cowardice on display from Alberta’s leadership, which has refused to do much of anything other than issue statements and write tweets. And nobody has been more of a coward than Premier Jason Kenney.

In a pitiful video he tweeted out on Wednesday, Kenney channelled his inner Neville Chamberlain while appealing to the people who are disrupting the flow of trade and traffic at the U.S. border and have been holding a group of truck drivers — actual truck drivers carrying actual loads of cargo — quasi-hostage for days now.

Kenney repeatedly emphasized his solidarity with the protesters and said he sympathized with their frustrations and concerns. Worse, he appears to be willing to capitulate to their primary demand, which is the removal of all COVID-19 restrictions and public health measures. “The end of COVID restrictions is near,” he said. “Stay tuned.”

This is a bizarre decision on any number of levels. First, there’s the fact that Kenney doesn’t appear to have learned from his own recent history when he lifted restrictions prematurely last year in advance of his promised “best summer ever” and ended up nearly crashing the health-care system within weeks. And right now, Alberta’s health-care system is in far worse shape than it was then.

On Wednesday, the number of people in hospital with COVID-19 hit a new high of 1,627, and while the number of COVID-19 patients in the ICU hasn’t quite reached record levels yet, there’s no guarantee that won’t happen soon. To lift restrictions now, when the health-care system is still stretched to its limit (and maybe beyond), is practically suicidal.

But that might not be the worst part of this decision. Conservative governments have traditionally prided themselves on refusing to negotiate with terrorists, but the UCP seems more than happy to do it here. As the Calgary Herald’s Don Braid wrote, “What I hear about MLAs negotiating with protesters is this. It’s more than a rumour.” Indeed, there’s a video posted to Facebook that shows the “truckers” voting on opening two lanes of traffic, based on an understanding the province will end its vaccine passport program.

In other words, Kenney has now established a clear precedent in Alberta: if you don’t like the government’s policy, shut down a major road until they change it.

Except, that is, if you’re an environmentalist or an urban progressive or any number of other groups that won’t be present at the UCP’s April 9 leadership review in Red Deer. Rural farmers and anti-vaccine activists, on the other hand, will be key players in the vote that will determine Kenney’s political future, which might help explain why he’s being so careful not to offend them right now.

This disparity in how the law is being enforced, and the way in which the provincial government is talking about it, hasn’t gone unnoticed. In an official statement, the Athabasca Chipewyan First Nation Chief and Council came out strongly against the glaringly obvious double standard the UCP government is creating. “In Coutts, we see the inequities in our country when it comes to Indigenous people and the methods used to control our right to peaceful protest. If the blockade in Coutts consisted of Indigenous people there would have been arrest and charges laid; instead, the Coutts blockade has been allowed to continue, even though at times it has become violent.”

Opinion: Conservative governments have traditionally prided themselves on refusing to negotiate with terrorists, but the UCP seems more than happy to do it here, writes columnist @maxfawcett. #Alberta #CdnPoli #TruckerConvoy #COVID

Ironically, the UCP and Kenney passed a law in 2020 that is fit for purpose here: the Critical Infrastructure Defence Act. It “protects essential infrastructure from damage or interference caused by blockades, protests or similar activities, which can cause significant public safety, social, economic and environmental consequences.”

It allows for heavier penalties to be applied, including up to $10,000 for a first offence and up to $25,000 for subsequent ones, along with prison time of up to six months, and it was proclaimed into force on June 17, 2020. But the unwritten subtext, it seems, is that it only applies to environmentalists blocking energy projects.

This is no way to run a lemonade stand, much less a province like Alberta. But it’s become increasingly clear that Jason Kenney and the UCP aren’t actually interested in governing the province. Instead, they’re focused on serving and protecting their own political fiefdoms and ensuring they remain in power as long as possible. Now, it’s up to Albertans to relieve them of their duties and put someone in charge who actually wants to do the job.

Premier Kenney has proven time and again that he is unable to make decisions that benefit the province that he is elected and responsible to govern. This is also seen in other provinces where the quest to remain in power is the primary motivator.

There is something disturbing happening in Canada with the numerous demonstrations of frustration with pandemic measures intended to protect the public from the Ottawa occupation, the pending demonstrations in Quebec and Toronto, Aylmer ON and most concerning, the demonstrations outside the homes of politicians and public health officials.

To date, these have thankfully not resulted in assaults or major property damage but the risk of harm increases with each new event.

While we all may feel the frustration with pandemic measures it seems that the rising anger and hate demonstrated at these protests may be emboldened by what appears to be a very soft approach by different police services. I am concerned that this may encourage more protests of this kind.

While I agree with Voltaire’s opinion on the individuals right of free speech, I don’t believe we should ever accommodate hate symbols, hate speech or any group issuing ultimatums to any government.

Demonstrate all that you wish but do with respect for the rights of others to work, conduct business, move about freely, refrain from intimidation or causing others to fear for their safety.

Should Premier Kenney capitulate to the demands of the protestors at the Coutts blockage he will set a very dangerous precedent that may ripple across this country where as you said, “if you disagree with govt policy, simply interrupt transportation routes and hold the route for ransom of your demands.

We are a land that decries “Peace, Order and Good Government” , too often of late we are failing to deliver any of the three. That should concern all Canadians of any political thinking.

A final note about hate symbols, it is difficult to miss the many flags, signs of hate (F Trudeau) and threats of safety directed toward the Prime Minister. When did this become “acceptable”? As many of the flags and signs seem mass produced it may be of interest to those wondering about these to understand their origin; a simple google search will yield pages of vendors all willing to sell these items and that includes many mainstream vendors. People are profiting from hate and we are witnessing the normalization of hate in Canada.

“Glorious and Free”? I have concerns.

Freedom convoy.... or the

Freedom convoy.... or the dictatorship of minorities?

Forty years ago, Canada adopted the charter of individual rights and freedom. The siege of the city of Ottawa, in Coutts and other cities is the ultimate consequence of this charter. A determined minority tries to impose its will on the majority in spite of common sense and the common good of society in general. The freedom convoy is the antithesis of democracy.

But what is democracy? Abraham Lincoln said that it was «government of the people, by the people and for the people». Then how do you determine who are "the people» ? In an election, the "people" choose their representatives by the majority of votes. It is the candidate with the support of the majority of voters in a riding that is declared to be the MP(member of parliament); it is the party that has a majority of MP that will form the government. However, democracy by a majority is not a “four year dictatorship” between two elections. There has to be an equilibrium between the rights of the majority and the rights of the various minorities. A minority has rights; but it never has a power of veto over the aspirations and the kind of society that the majority wants when that majority respects the democratic process. Furthermore, FREEDOM HAS TO INCLUDE RESPECT FOR THE FREEDOM OF OTHERS!

In the case of the «freedom convoys», 85% ( + or - ) of truckers are vaccinated. These individual are defending the «rights» of 10% ( possibly 15 %) of the population; furthermore, these «unvaxed» put the health of the majority in jeopardy. True we are all tired of the restrictions imposed by the sanitary authorities. But neither the «unvaxed» nor the rest of us can hope that our fairy Godmother will drive Covid away with her magic wand!

The "Freedom Convoys" are the antonyms of true freedom in a democratic society. The siege in Ottawa is the most outrageous example of a fundamentalist interpretation of the charter of individual rights and freedom pushed to its ultimate limits. This is a siege by a handful of «spoiled brats»; this a brazen prostitution of the word «freedom»! It is the dictatorship by a tiny minority.

Well said. This is more of a

Well said. This is more of a tantrum then an actual protest with a purpose. The mandates and lockdowns are not arbitrary. Nobody likes them! They exist to save lives and the Healthcare System. They're far from perfect but pretending this is over is just plain selfish when we know what will happen. The great irony is that not getting vaccinated and not wearing masks just prolongs the whole misery for everyone.

Kenney’s theatre to pacify the most extreme of his base at the Coutts border crossing by promising to more or less immediately repeal COVID measures, while out other side of his mouth demanding fiercely that restrictions protests be conducted in a lawful fashion is beyond hilarious. His tightrope walk to suck up to the basest of his base is going to turn into a wedgie.

Kenney capitulates on mandates to a tiny subset of an unvaxxed minority. Trudeau holds his ground on border restrictions / mandates to protect all Canadians and help save the healthcare system. On other issues like climate, both are weak. On COVID there is no comparison.