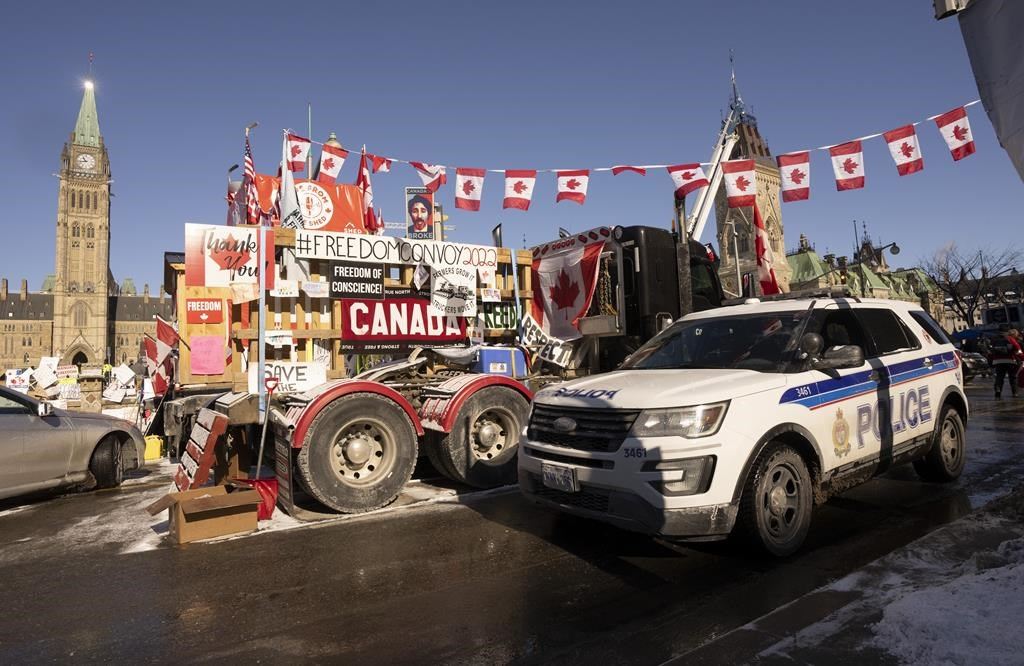 A police car passes trucks parked in front of the Parliament buildings, on Tuesday, Feb. 15, 2022 in Ottawa. Photo by The Canadian Press/Adrian Wyld
Previous story
Next story

Figures behind the protests blockading Parliament Hill and various border crossings are championing new ways to finance their movement — including through their own crypto token — as Ottawa invokes sweeping powers to crack down on their cash flow.

Pat King, an influential organizer, appeared in a video streamed live on Facebook Monday, hours after Prime Minister Justin Trudeau announced he was invoking the Emergencies Act in hopes of bringing an end to the protests.

The never-before-used federal legislation is designed so that Ottawa can introduce temporary measures to deal with what it deems to be a public emergency.

The measures include the power for banks to suspend or freeze the accounts of those supporting the blockades and force crowdfunding platforms and cryptocurrencies to follow anti-money laundering and terrorist financing laws.

At the end of the 24-minute video, in which King tells his supporters "don't back off" in the face of the new federal powers, he encourages them to check out a website for a "freedom convoy token."

The website lists King, who is identified as a so-called freedom fighter, as a founder of the token, along with several others and a team of developers.

It's not the first time leaders of the protest movement have advocated for supporters to turn to the more complicated world of cryptocurrency as a channel to generate funds, including last week when others promoted the use of Bitcoin.

King's site instructs users to download a crypto wallet, purchase an already established token and then swap that for the convoy's coin.

University of Toronto finance professor Andreas Park says anyone can create a crypto token and it appears the organizers are using it as a way to fundraise online.

"What they do is they sell these tokens in return for cash," he said.

"They create this token. You give them a token that actually has value. They can take that token, convert it to money and do their thing."

Compared to the regulated banking system, this one is much more difficult for governments to control and enforce rules, Park said.

The convoy coin website lists its initial cause to be fundraising, but also references a later goal as starting "development of a GoFundMe-like killer decentralized platform."

"Being able to push our cause to a worldwide audience with no entity to control our vision meant going decentralized," its reads. It adds that four per cent of every transaction will go into what's called the "Freedom Convoy Foundation."

As of Tuesday at around 5 p.m., it reported nearly 3,000 transfers had occurred.

Creating their own crypto coin began after protesters were initially raising funds on GoFundMe. Donors contributed more than $10 million before the website pulled the plug, saying the demonstration had become an "occupation."

Police and local leaders had expressed concerns about the platform's role in financing the Parliament Hill blockade, which was causing headaches for residents because of the truckers' incessant honking and forcing nearby businesses to shut their doors due to worries about harassment and public health rules being broken.

Organizers then turned to GiveSendGo, a Christian crowdfunding platform, where it raised more than $US8.4 million before an Ontario court froze access to the funds at the request of the provincial government.

All the while, those protesting on Parliament Hill have been seen collecting cash donations and passing out bills.

Matt McGuire, an anti-money laundering expert and cryptocurrency investigator who also reviewed the convoy's coin, said it appears to be designed in such a way that makes it more challenging to connect the individuals who donated to the actual funds.

"The amount of layering involved will also make it difficult to know the ultimate use of the funds," he said.

Unlike Bitcoin, which has been around long enough the cryptocurrency can be transferred into something like a prepaid card, he said nothing yet exists for those holders of the convoy coin.

"The problem they're going to have next is how do you get this (freedom convoy token) into real money," he said. "You have to try to swap it for something else that you could actually get out of the system."

King's video Monday evening also teased another fundraiser for supporters to use. A woman who was identified as "Dayna" from within the movement touted a website that paired donors with a family or a truck driver in need of support funds.

By Tuesday afternoon, that website was no longer available.

This report by The Canadian Press was first published Feb. 15, 2022.