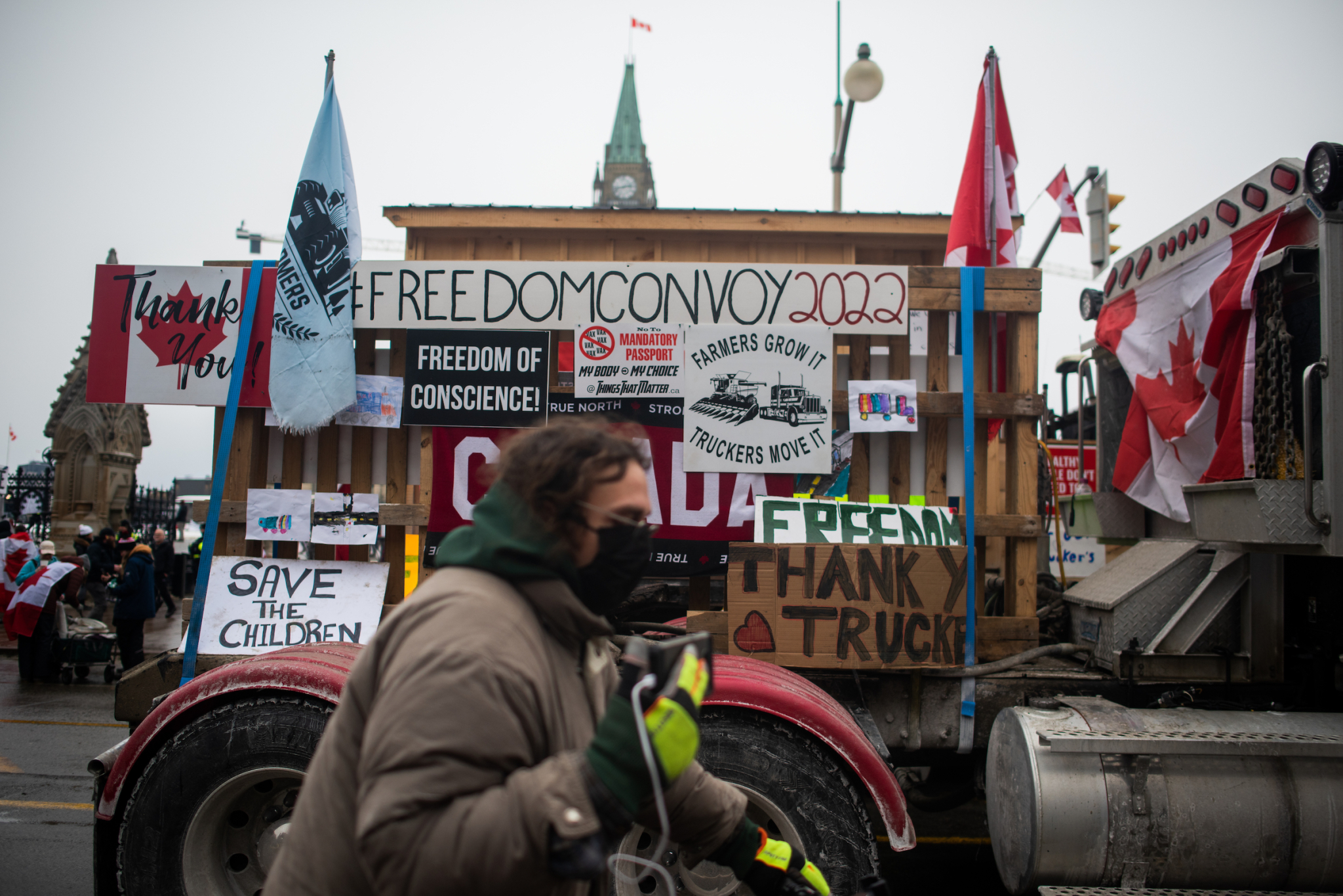 A biker rides past a truck decorated with anti-COVID-19 mandate sentiments during a protest in Ottawa on Wednesday, Feb. 2, 2022. Photo by Spencer Colby / Canada's National Observer
Previous story
Next story

The anti-mandate protesters who have shut down international borders and occupied Ottawa since Jan. 29 style themselves as a working-class, blue-collar movement rallying against elites and moneyed global interests. But recent data leaked from a fundraising campaign in support of the protests tells a different story.

On Sunday evening, unidentified hackers took over the Christian crowdfunding website GiveSendGo, which hosted a fundraising campaign for the so-called “freedom convoy” protests after GoFundMe cancelled a similar campaign in response to reports of violence. The hackers, whose identity Canada’s National Observer has not confirmed, released what appears to be a list of more than 92,000 donors to the GiveSendGo campaign, which had by Sunday reached roughly US$8.4 million. In many cases, the data includes names, postal codes, amounts given and email addresses.

In a statement to Canada’s National Observer, GiveSendGo acknowledged a breach had resulted in the distribution of authentic donor details, adding it has doubled down on security measures.

“We are in a battle. We didn’t expect it to be easy,” part of the statement read. “This has not caused us to be afraid. Instead, it’s made it even more evident that we can not back down.”

As of Tuesday morning, GiveSendGo’s website appears to have returned to normal.

The leaked data suggests a considerable number of donations to the convoy came from people who appear to be in the U.S. According to an analysis by Queen’s University professor Amarnath Amarasingam, an expert in extremism and social movements, 56 per cent of contributions appeared to come from American donors and only 39 per cent from Canadians. Multiple donations in the leaked data were attributed to email accounts from the U.S. Department of Justice, NASA and the Federal Bureau of Prisons, among other American government agencies.

However, Amarasingam pointed out, Canadian donations added up to nearly US$700,000 more than their American counterparts. Former Newfoundland PC leader Ches Crosbie was among the Canadians who contributed to the GiveSendGo campaign, confirming to The Independent a US$800 donation in his name. Crosbie joins former Newfoundland and Labrador premier Brian Peckford in his vocal support for the protests.

The Globe and Mail’s Tom Cardoso reports that in all, the top one per cent of contributors accounted for 20 per cent of the campaign’s donations.

Canada’s National Observer has reviewed the data and cross-referenced it with public records, social media accounts and reporting from reputable news media to share a snapshot of the Canadian donors who pumped money into the protests. While we have not independently verified all names in the dataset, Canada’s National Observer has identified a handful of confirmed donors. We reached out to each person identified below for comment on this story, but only a few responded.

At the top of the list sits Brad Howland, a business owner from Sussex, N.B., who confirmed via his business’ social media page that he donated to the campaign. Howland’s US$75,000 donation is the third-largest in the dataset. According to CBC, Howland is a supporter of Donald Trump and distrusts vaccines.

The Range Langley, a shooting range in B.C., also donated US$18,000 to the fundraiser. Owner Dustin Sikora was unavailable for comment, but the range’s manager, Andrew Trafananko, pointed to a statement on the business’ website confirming the donation after the Georgia Straight first reported the gift was initially sent to the GoFundMe campaign. The statement notes the business is run by former military and police officers. “We patriotically defend the Rights of the Individual,” it reads. “We peacefully promote Freedom over fear. We proudly support our Truckers.”

Montreal entrepreneur Jason Van Gaal confirmed in an email that he donated US$3,000 to the campaign, adding he planned to spend the same amount or more on carbon offsets. For Van Gaal, the convoy protests and climate crisis are equally critical matters.

Leaked data from a crowdfunding campaign supporting the convoy suggests a considerable number of donations came from people who appear to be in the U.S. #GiveSendGo

“I think the size of a donation should be proportional to the importance of the cause,” Van Gaal wrote in an email to Canada’s National Observer. “Just like with climate change, I truly hope our parties in power will do the right thing.”

A number of donors processed their contributions through email addresses linked to Canadian businesses. According to the data, two contributions of US$15,000 each appear to have come from a Calgary commercial real estate investor and an associate of a commercial Saskatchewan grain farm. Several others tossed in between US$5,000 and US$7,000 each, with names and postal codes listed in the donor data matching the identities of two venture capital firm managers, a renowned luxury furniture designer and an Ottawa luxury real estate landlord.

This story has been corrected to remove one of the names.

Some of our leading entre

Some of our leading entre proners are with the convoy? Why am I not surprised???

Individual freedom to do whatever will never interfere with private profits. It's the taxes governments need to raise to fund schools and hospitals that do that.

When it comes to what just might destroy our democracy...'it's the free market economy, stupid!'

The preservation of wealth

The preservation of wealth seems to be the only universal "ethical" guideline in the global society. Humanity is killing the goose to rob the golden eggs.

The man who said he thought

The man who said he thought climate change was a very important issue, which it is, had better donate substantially more because trucks idling , running their engines day and night are certainly not helping to reduce the carbon footprint. The next time a Democrat running for office in the USA asks me to donate to their campaign perhaps I will decide to do so. I have refrained because I didn’t believe that I should interfere in another country’s democratic process but it doesn’t seem as if some Americans operate under the same ethical principles.

I would dearly love to know

I would dearly love to know the names of these ... people, and the names of any businesses they own/run/manage.

Because I will never deal again with any of them.

I already have a small list of such businesses in my small rural community--the ones who marched all summer long on our waterfront, violating masking, social distancing, vaccines for themselves and their children, and spouting their ignorance of Canadian law, science, medicine, and fundamental common sense.

I shall now sit back and wait

I shall now sit back and wait for your awsome comments and sworn commitments to our governance, when, without any special reason, it decides to freeze your assets or institutes a Big Brother is watching identity system in our free wonderful country. Heaven help us all because that is where we are headed and fast. Keep hating those who fight for the freedom we used to have with the Charter I'm sure you will find great comfort in for a while.