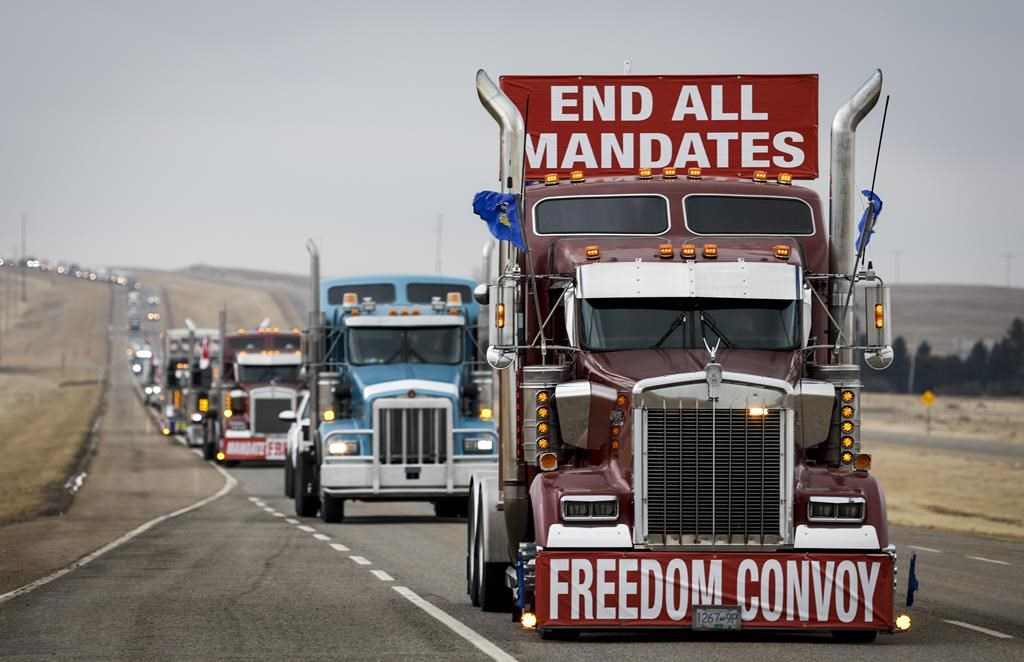 Demonstrators against COVID-19 vaccine mandates and other pandemic restrictions leave in a truck convoy after blocking the highway at the busy U.S. border crossing near Coutts, Alta., on Feb. 15, 2022. File photo by The Canadian Press/Jeff McIntosh
Previous story
Next story

A criminal anthropologist suggests looking to the West to find the heart of protests and blockades that gripped the nation for more than a month.

Alberta appears to have been the epicentre of unrest that started with truckers over cross−border vaccine mandates, but quickly attracted other groups with their own agendas. Most prominent were demands to lift all pandemic public health measures, complaints about the federal Liberal government and rallying cries for freedom.

Two people arrested for leading the noisy three−week standoff in downtown Ottawa call Alberta home. A third is from Saskatchewan.

There are 13 people with alleged violent motives facing serious charges in relation to the southern Alberta border blockade at Coutts. Four are accused of conspiracy to commit murder of RCMP officers.

Another convoy destined for Ottawa originated in northern Alberta, but was turned away at the Manitoba−Ontario boundary in recent days, Prime Minister Justin Trudeau said Monday.

Cathy Prowse, a criminal anthropologist as well as a 25−year Calgary police veteran, said Alberta’s economy and way of life have been hit hard by COVID−19, which has created a wellspring of dissent.

"We’ve had trouble getting oil to market. We’ve had farmers that haven’t got enough feed for their cattle," said Prowse. "Displacement is huge here. Probably as bad as, if not worse, than any part of the country."

Prowse added there are other pockets in Canada, such as Quebec, that are seeing similar swells of discontent.

She said there are three camps participating in what participants are calling "freedom convoys."

The least harmful, she said, are people who see freedom as the right to choose whether to be vaccinated and to bypass restrictions based on faith or personal beliefs. The second group, often termed extremists, seeks freedom from government and the rule of law.

But, Prowse said, possibly the most dangerous are those who have been socially isolated during the pandemic and are connecting with others through participation in the protests.

"There’s some in there who ... are going to crave this affiliation. They’re going to want more," she said.

"There’s always a potential for spillover into more extremist groups."

A review of donations made through a crowdfunding website to support the convoys shows some of the most common words used by supporters were "freedom," "God" and "tyranny."

Public Safety Minister Marco Mendicino has said the arrests at the border protest in Alberta speak to a larger problem in Canada. Some people who were in Coutts have strong ties to a far−right extremist organization led out of Ottawa, he said, although he did not name it.

Emily Laidlaw, a Canada Research Chair in cybersecurity law, said the demonstrations show the slow burn stoked on social media by misinformation — which can be partially true — and disinformation, which is more intentional in nature.

"It just veers off into territory that is just having such widespread influence," said Laidlaw. "That’s when you lose control of it and ... you see movements like this."

She gave as an example a video circulated online that shows a police officer giving an incorrect interpretation of the Charter of Rights and Freedoms, which people then view as fact.

There are also conflicting videos and photos from the protests on social media. Some show peaceful demonstrations, while others reveal criminal behaviour or hateful symbols, including the Nazi swastika and Confederate flag claimed by extremist groups.

An RCMP raid in Coutts seized long guns, handguns, a machete, a large quantity of ammunition and body armour. Two confiscated tactical vests had badges related to a neo−fascist movement and another possible hate group.

"What we’re seeing now is the undermining of trust in the institutions that we would normally turn to for information and, so, there’s no sense of what’s true anymore," said Laidlaw.

Social media pages under the same names as several of the accused in Coutts have shared conspiracy theories, complaints about the government and inaccurate COVID−19 information.

Laidlaw said, from a legal perspective, Canada is entirely dependent on social media platforms to self−regulate. But despite efforts, that type of information continues to spread.

— With files from Bob Weber in Edmonton