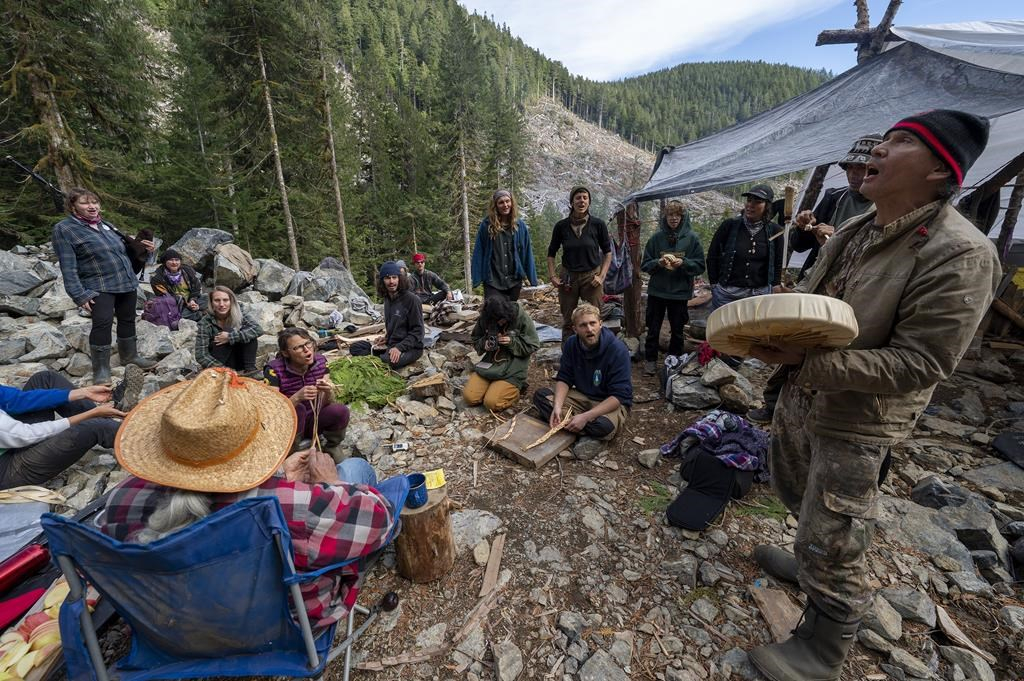 People who have declared themselves “Land Defenders” sing a song as they guard an area of a logging cut block called “Heli Camp” in the Fairy Creek logging area near Port Renfrew, B.C. on Oct. 4, 2021. File photo by The Canadian Press/Jonathan Hayward
Previous story

A judge hearing a request to stay proceedings against people arrested at old−growth logging protests on Vancouver Island says the application has a reasonable prospect of success, but he wants another judge to consider it with "fresh eyes."

B.C. Supreme Court Justice Douglas Thompson says he has asked the chief justice to assign a second judge to hear the protesters’ application, which alleges misconduct by the RCMP during arrests where about 400 people were charged with criminal contempt.

Over 1,100 people have been arrested since the injunction against blockades in the Fairy Creek watershed northwest of Victoria was granted last year to logging company Teal Cedar Products Ltd.

Six protesters were part of the application, but the Crown has since stayed charges against two women who also alleged abuse of process by officers who they said used unlawful tactics to arrest them.

In separate proceedings heard by Thompson, some people who pleaded guilty to contempt of court have been sentenced to up to seven days in jail or a $500 fine and 50 hours of community service.

Other protesters’ trials were expected to start next month, and while Thompson says he will manage those cases, some of the protesters may choose to apply to adjourn proceedings and join the stay application.

Karen Mirsky, who has one client applying for a stay, says she represents about 25 others making similar allegations and that many of them are expected to join the stay application.

"We are holding back to find out if we could go ahead in this way," she says of the potential for the case to move ahead depending on the new judge’s decision.

Mirsky says it’s reasonable for Thompson to pass the stay−application case to a second judge as he manages the trials of others charged for allegedly violating the injunction order.

She says the high number of arrests at the protests involved the largest−such police operation in Canadian history.

The Crown had argued the stay application had no grounds to proceed because some of the applicants were relying on accounts of others who alleged mistreatment by police.

A spokesman for the Crown did not wish to comment on Thompson’s decision.

Thompson says he anticipates a new judge will hold a pre−hearing conference to get advice before lawyers for protesters and the Crown are told when the stay application will be heard.