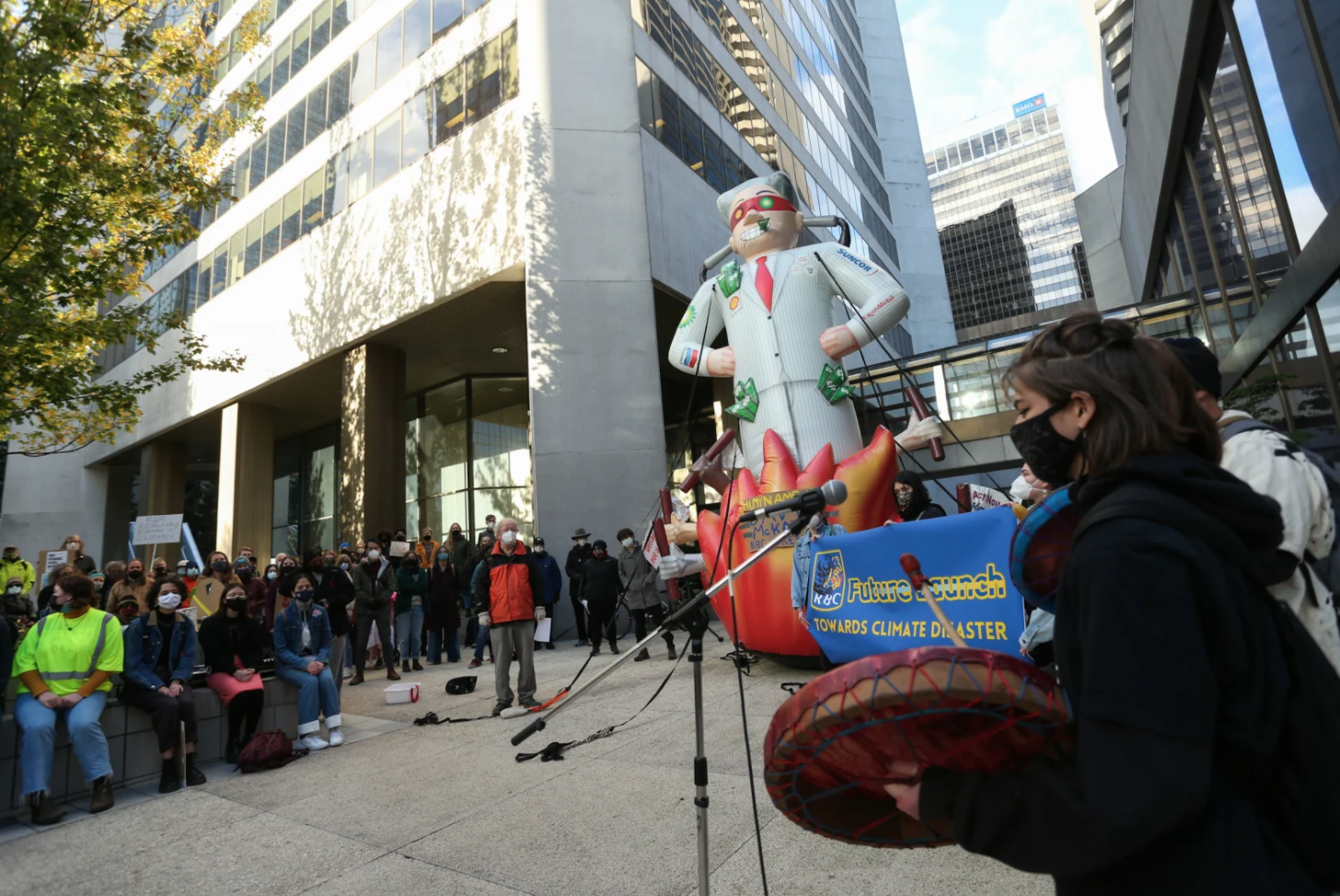 Zoe, a young woman from the Musqueam Nation, speaks to the protesters outside RBC's office in downtown Vancouver last year. Photo by Jesse Winter
Previous story
Next story

Canada’s biggest banks are responding to climate-related resolutions, offering a peek into how seriously they take the crisis as the annual shareholder meeting season approaches.

While RBC is encouraging shareholders to reject a resolution that would prevent it from financing fossil fuel companies under the banner of “sustainable” lending, Canada’s National Observer has learned the bank rejected a separate resolution that would stop it from financing fossil fuel companies exploring or developing untapped oil and gas reserves by the end of 2022 because the text of the resolution was 49 words above the word limit.

“That’s why I used my shares to file a climate resolution for RBC’s April shareholder meeting. For it to be rejected on a mere word count, before even having the chance to be voted on, is disappointing and unacceptable.”

The resolution notes RBC is the fifth-largest financier of fossil fuels in the world, and says that by funding fossil fuel companies, RBC will be unable to reach its net-zero by 2050 commitment. It references the International Energy Agency’s (IEA) net-zero report, which found that if the world is going to meet the Paris Agreement goal of holding global warming to 1.5 C, then there is no need for any investments in new oil and gas projects.

“RBC talks a big game when it comes to climate action, but their track record shows otherwise. Their rejection of this resolution on a mere technicality is just the latest example of this,” said Adriana Laurent, a campaigner with advocacy group Leadnow.

“If they're serious about climate leadership, they should face up to their shareholders and take urgent action to phase out their financing of fossil fuels.”

The resolution was co-ordinated by advocacy group SumOfUs. RBC told Canada’s National Observer that it welcomes engagement from the group on a number of issues, including climate change, which the bank says it recognizes as “the most pressing issue of our age.”

“We are committed to treating all shareholders filing proposals fairly and equally,” said spokesperson Gillian McArdle. “This particular proposal and its supporting statement didn’t meet the eligibility requirements under the Bank Act.”

As the annual meeting season gets closer and banks are plied with climate-related resolutions, leaders and laggards are emerging.

Canada's biggest banks are gearing up for AGM season where climate will be front and centre. Still, several are urging shareholders to shoot down resolutions that would stop them from financing fossil fuel expansion. #cdnpoli #FinancingDisaster

Advocacy group SumOfUs filed a resolution with TD that would prevent the bank from financing fossil fuel expansion by the end of 2022. Unlike the rejected RBC resolution, TD shareholders will vote on this at its annual meeting next month.

“We’ve been engaged in dialogue with high-level staff at TD Bank for the last several years about the bank’s climate change plans, and though we don't see eye to eye on what the banks should do to address climate change, along with Scotiabank, we find that these two lead the Big 5 banks in terms of having good-faith conversations with its shareholders,” said Angus Wong, a senior campaign manager with SumOfUs.

Still, TD is urging shareholders to reject the resolution, and its justification misrepresents critical facts.

“The need to continue to invest in the responsible production of fossil fuels during the transition period in order to facilitate a just and orderly transition has been acknowledged by policymakers such as the European Commission and by expert bodies such as the International Energy Agency (IEA), including its Net Zero Emissions by 2050 (NZE) report, which is the basis currently being used by TD and some other major banks as a benchmark for determining their own 2030 emission reduction targets,” the bank says.

This is not true. In fact, the IEA says: “Beyond projects already committed as of 2021, there are no new oil and gas fields approved for development in our pathway, and no new coal mines or mine extensions are required.”

The IEA’s net-zero report is clear there is no need for investments in new fossil fuel projects, but it concedes there is room for investments in existing oil and gas projects related to maintenance and other issues. This is an important distinction because the resolution from SumOfUs is aimed at stopping new production, and TD’s rationale to encourage shareholders to reject it hinges on the IEA's concession about financing existing fossil fuel projects.

In its recently released climate plan, TD outlines a number of new climate commitments, ranging from emission reduction goals to new limits on coal financing. However, critics say the plan doesn’t go far enough. For example, the bank's climate target focuses on lowering emissions intensity — the amount of planet warming greenhouse gas emitted to produce something — instead of absolute, or total, emissions which refer to the amount of greenhouse gases accumulating in the atmosphere.

“Unfortunately, TD has left the door firmly open to financing fossil fuel expansion by setting only weak intensity-based 2030 targets for energy and power generation. It’s unclear how this approach squares with TD’s commitment to reduce its absolute financed emissions to net-zero by 2050,” said Matt Price, with Investors for Paris Compliance.

BMO, on the other hand, is moving to the front of the pack, having set an absolute emissions reduction target in its recently released climate plan. The bank aims to cut emissions not just from its own operations but the companies it's invested in and the products they create by 24 per cent by 2030. RBC is putting off announcing an emission reduction target until next year.

Weasels. They"re all liars and weasels.

I suppose that something as large as "Tar Sands" could be interpreted to be an "existing project." Why are they not speaking about the banks' existing commitments? Or are they tailoring this to meet with Trudeau's recent claim there'd be no more government funds for TMX??? And what about the original agreement to cover all losses??? What about guarantees, including guarantees for existing loans that haven't met repayment schedules?

But the weasel is revealed in the last two words. "Other issues." That's ... pretty vague, and could mean pretty much anything. Other issues. Indeed.

Words are all that formal communications have to nail down meaning. More and more, words are used not to nail down meaning, but to be ambiguous. So that everyone hearing the words, not paying attention to exactitude, can get the idea that what is being said fits with their existing preferences.

As far as bank resolutions go, I'm wondering how many other RBC shareholders got AGM packages complete with ballots, but no text of resolutions, no bios of directors.