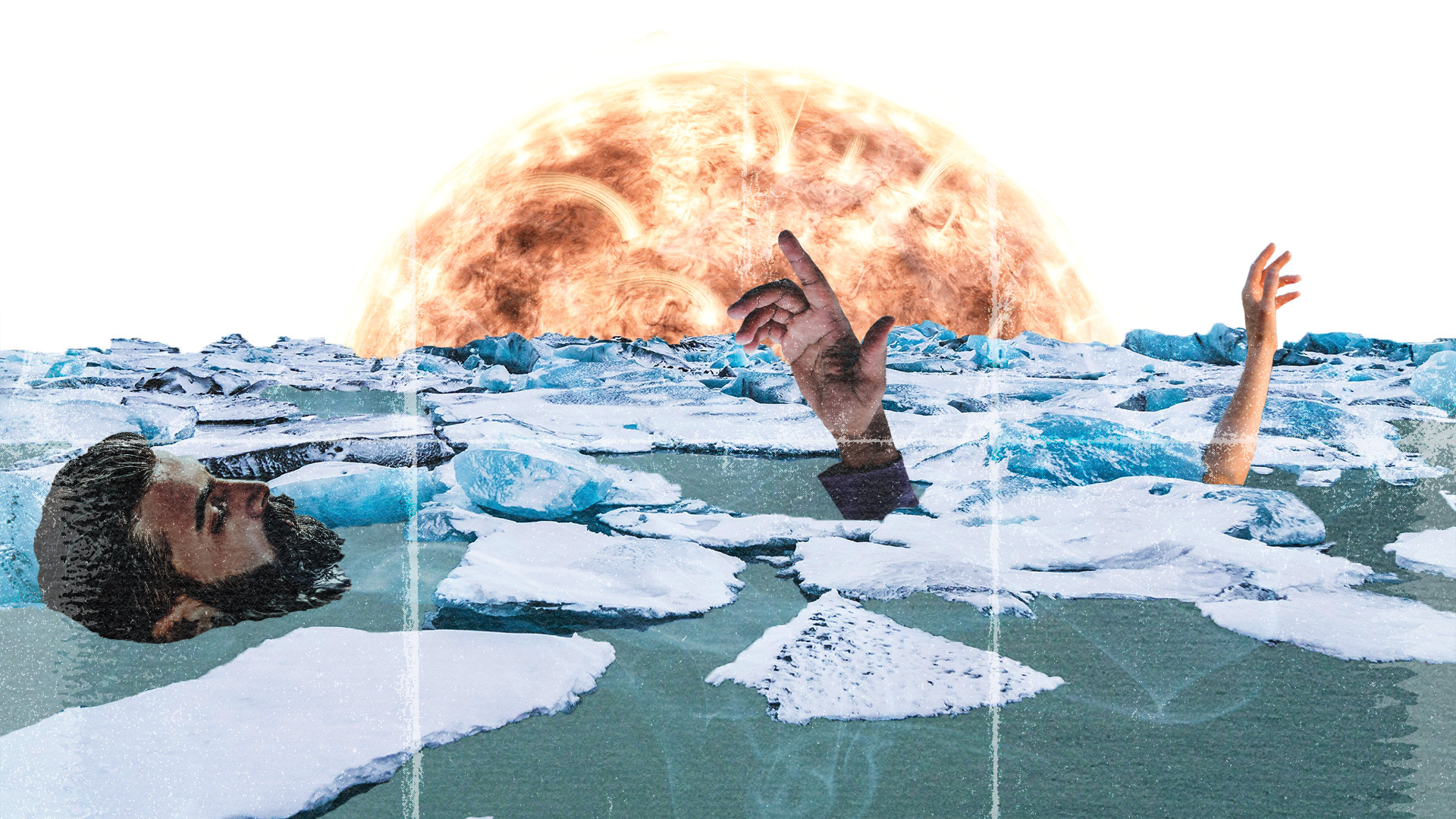 The Intergovernmental Panel on Climate Change (IPCC) is warning of “unavoidable multiple climate hazards” over the next two decades in a clear recognition society is entering an era of irreversible breakdown unless there’s immediate large-scale action to avert catastrophe.

The report published Monday is focused on adapting to climate change and outlines in unprecedented detail what regions are exposed to what risks in order to illustrate just how vulnerable communities are to climate impacts. At a high level, the report finds increased floods, heat waves and droughts around the world already expose millions of people to food and water insecurity and are driving extinction across a number of animal and plant species. With every fraction of a degree hotter the planet gets, those problems get worse.

“To avoid mounting loss of life, biodiversity and infrastructure, ambitious, accelerated action is required to adapt to climate change, at the same time as making rapid, deep cuts in greenhouse gas emissions,” the IPCC said in a statement.

United Nations secretary general António Guterres called the report “an atlas of human suffering” and called on increased action from wealthy countries and financial institutions to phase out fossil fuels.

He said with all G20 countries committing to stop funding coal projects abroad, they must now dismantle their coal plants at home. He also said oil and gas giants and their underwriters are “on notice” and “must be held to account.”

In Canada, this adds mounting pressure to banks, pension plans, insurance companies and Crown corporations like Export Development Canada to align their investments with a climate-safe future given Canada is one of the world’s largest financiers of fossil fuels. Since the Paris Agreement was signed, Canadian banks have loaned or invested approximately $700 billion to fossil fuel companies, while Canada invested $13.6 billion annually, on average, from 2018 to 2020 in fossil fuel companies.

Guterres also called on wealthy countries to scale up international climate financing, with half earmarked for adaptation projects.

“The Glasgow commitment on adaptation funding is clearly not enough to meet the challenges faced by nations on the front lines of the climate crisis,” he said.

“A justice lens approach requires committing to responding to the needs of people most affected and on the front lines of the climate crisis,” he said. “It speaks a lot to the fact that (climate solutions) need to be interconnected with not only environmental issues but also social systems and economic systems.

A new report from the @IPCC_CH shows vulnerabilities to climate breakdown around the world. In Canada, misinformation from politicians and the fossil fuel industry is called out as the major barrier to action. #cdnpoli

What Canada is bracing for

As the planet warms, Canada will face increased wildfire risks. Fire seasons will get longer, increased heat waves will bake forests making fires more likely, and lightning strikes will become more frequent. Areas that previously would have a fire once every 400 years will see fires once every 50 by the end of the century if emissions remain high. Canada says the cost of fighting wildfires has surpassed $1 billion annually in six of the past 10 years and that will only increase as the planet warms.

Similarly, sea-level rise, flooding, landslides, permafrost thawing and extreme weather will continue to destroy infrastructure across the country. In Atlantic Canada, sea-level rise is expected to be higher than the global average, putting communities on the coast at increased risk from flooding and coastline erosion. In the North, ice roads, critical for remote communities, will become more dangerous as the planet warms, and permafrost thawing will disrupt infrastructure for northern communities. The report also says annual rainfall will leap 20 per cent if emissions continue to increase, making infrastructure failure, like British Columbia experienced from the atmospheric river in November, more likely.

Food insecurity in Canada will be made worse by a warming climate, the report also predicts. For Indigenous peoples especially, climate change will continue to have harmful effects on traditional foods, leading to negative physical and mental health outcomes as well as exacerbating food insecurity by requiring more foods to be imported at a higher cost. Aquaculture will be particularly impacted by climate change because of increased ocean acidity and reduced habitats for fish. If emissions stay high, fish production in Canada is expected to drop 66 per cent from 2030 to 2050, while shellfish would see a 51 per cent drop over that same period.

Agriculture is a bit more complicated. Some crops like maize could see a drop in production, while low levels of warming may in fact lead to increased short-term yields in other crops, the report says. However, increased warming would, in time, wipe out higher yields, and increased warming is expected to make pests and diseases worse.

Canada’s economy will also be affected by global climate change. There are domestic impacts ranging from things like damaged infrastructure or lower agricultural yields, but Canada cannot completely untangle itself from international supply chains, making the country vulnerable to shocks around the world. The IPCC authors have “high confidence” there will be large economic damages across North America if global emissions aren’t brought down rapidly.

One finding of the report is that a major barrier to climate action in North America is the undermining of climate science from politicians and industry.

“Rhetoric and misinformation on climate change and the deliberate undermining of science have contributed to misperceptions of the scientific consensus, uncertainty, disregarded risk and urgency, and dissent,” the report finds. “Additionally, strong party affiliation and partisan opinion polarization contribute to delayed mitigation and adaptation action, most notably in the U.S. but with similar patterns in Canada.”

In Canada, this is clearly reflected in Alberta Premier Jason Kenney using taxpayer money to attack environmentalists and spread propaganda via the Canadian Energy Centre. But it is more subtly reflected in the federal Liberal government that claims fossil fuel investments will pay for a clean energy transition despite warnings from the International Energy Agency, IPCC, and UN Production Gap report that immediate emission reductions are required to avert catastrophe, and that there is no space for any new fossil fuel project if the world is to hold onto the Paris Agreement goal of holding warming to 1.5 C.

Stand.earth international programs director Tzeporah Berman called the IPCC’s finding that misinformation and polarization is a barrier to North American climate action the “most political” statement she’s ever seen from the international body that famously shies away from politics. She noted the IPCC statement was signed off on by world governments, including Canada, which is notable given the intense lobbying efforts from the oil and gas industry directed at all levels of government.

For instance, a 2019 study from the Corporate Mapping Project found that between 2011 and 2018, the fossil fuel industry recorded contacting government officials more than 11,000 times, representing more than six communications per working day.

Berman said the IPCC report makes clear the time for “vague” climate solutions — like carbon offsets or technological fixes to make fossil fuels “clean” — is over. Instead, she says bold action is needed now to avert climate breakdown. She said Canada must stop expanding the production of fossil fuels, protect intact old-growth forests and support economies around the world with their transitions.

“We have known this for decades, but what this report makes extremely clear is that what we are facing every day already in Canada with the fires, with the floods, with the heat waves, comes from three products: oil, gas and coal,” she said.

“We need to break free from the fossil fuel industry, which is holding our policy and our politics hostage to the benefit of a very small number of companies.”

One way to break this influence is by cutting off the financing. Berman referenced a study from the International Monetary Fund released last year that found the global fossil fuel industry receives US$11 million worth of subsidies every minute. In practice, that meant the IMF found coal, oil and gas companies were subsidized to the tune of nearly $6 trillion in 2020.

A study from Oil Change International and Friends of the Earth U.S. found from 2018 to 2020, G20 countries provided at least US$63 billion per year to the fossil fuel industry. Over that same period, Canada gave at least $11 billion (about C$13.6 billion) to the oil and gas sector, mostly through Export Development Canada, representing nearly 20 per cent of the G20 total.

Still, Berman said in Canada there are several ongoing examples of fossil fuel projects getting public money, including the Trans Mountain expansion, Coastal GasLink pipeline and the LNG Canada site, as well as a couple of new fossil fuel developments that show Canada is still not taking the crisis seriously.

“We're right now in the midst of two new pushes,” she said. “One to approve an offshore drilling project that holds a billion barrels of oil, the Bay du Nord, which goes to cabinet next week … and two, the oil and gas industry is arguing for a massive new credit for carbon capture and storage despite the fact that the IPCC reports have said very clearly you can't use these technologies to justify increased expansion.”

Berman called the government’s claim that these types of fossil fuel projects have a place during the energy transition “absolutely absurd.”

“It is not a transition if we're growing the problem,” she said. “And if wealthy countries are not willing to act now, then we know that we're on a track for millions of people to die in our lifetimes due to climate change.”

I guess clearly stating the

I guess clearly stating the problem and who is blocking action is a start? I am thinking how big a change that is from say, the propaganda adds by big oil flooding our tvs over the past twenty years claiming how vital destroying life systems was for ourneconomy? cbc not saying “ tarsands” as actual explicit policy?
small step towards reality?

https://www.desmog.com/2022/02/24/canada-funding-van-kooten-denying-clim...
Here's another example, as if we needed ONE more at this point, of just how irrational people are, how averse to confrontation. But this really surprised me because I've wanted to see our universities as the last bastion of reason ....

So the IPCC famously avoids

So the IPCC famously avoids politics. Academics do too and clearly this has to stop. The first step in the right direction would be to stop pretending both sides are the same, that all politicians are inherently devious. Not true. Start naming the enemy by calling out the right wing/conservatives at EVERY turn, and to prove you're not motivated primarily by self-interest, PLAN to unite the left against them as they have so vociferously and relentlessly done against us on the left. Under the dire circumstances before us, to continue business as usual, i.e. being classic examples of the "narcissism of small differences" is as insane and irresponsible as they are.

Well put, thanks!! "Getting

Well put, thanks!! "Getting political" is one of the most important things average Canadians can - and MUST - do!! This is in no way meant to be a political ad, BUT the NDP is the only left-leaning party in Canada, and as such, MUST be pushed HARD to get going!! There is a socialist group within the party, federally and provincially (at least in B. C.) that is working hard to do just this. Please join!! Thanks!

NO, no no. You missed the

NO, no no. You missed the point. Right now the Ontario public is split down the middle between Liberals and NDP so the cons will win again. It's math. Again.
The Liberals are NOT that different from the NDP comared to how much BOTH are different from cons. That's the narcissism, to think that; being so tribal is the problem. Pan out, get the big picture!

Here's something we can all

Here's something we can all do: Take part in the Just Transition Rally on March 12thhttps://350.org/just-transition-day-of-action/ organized by 350.org and the Council of Canadians.