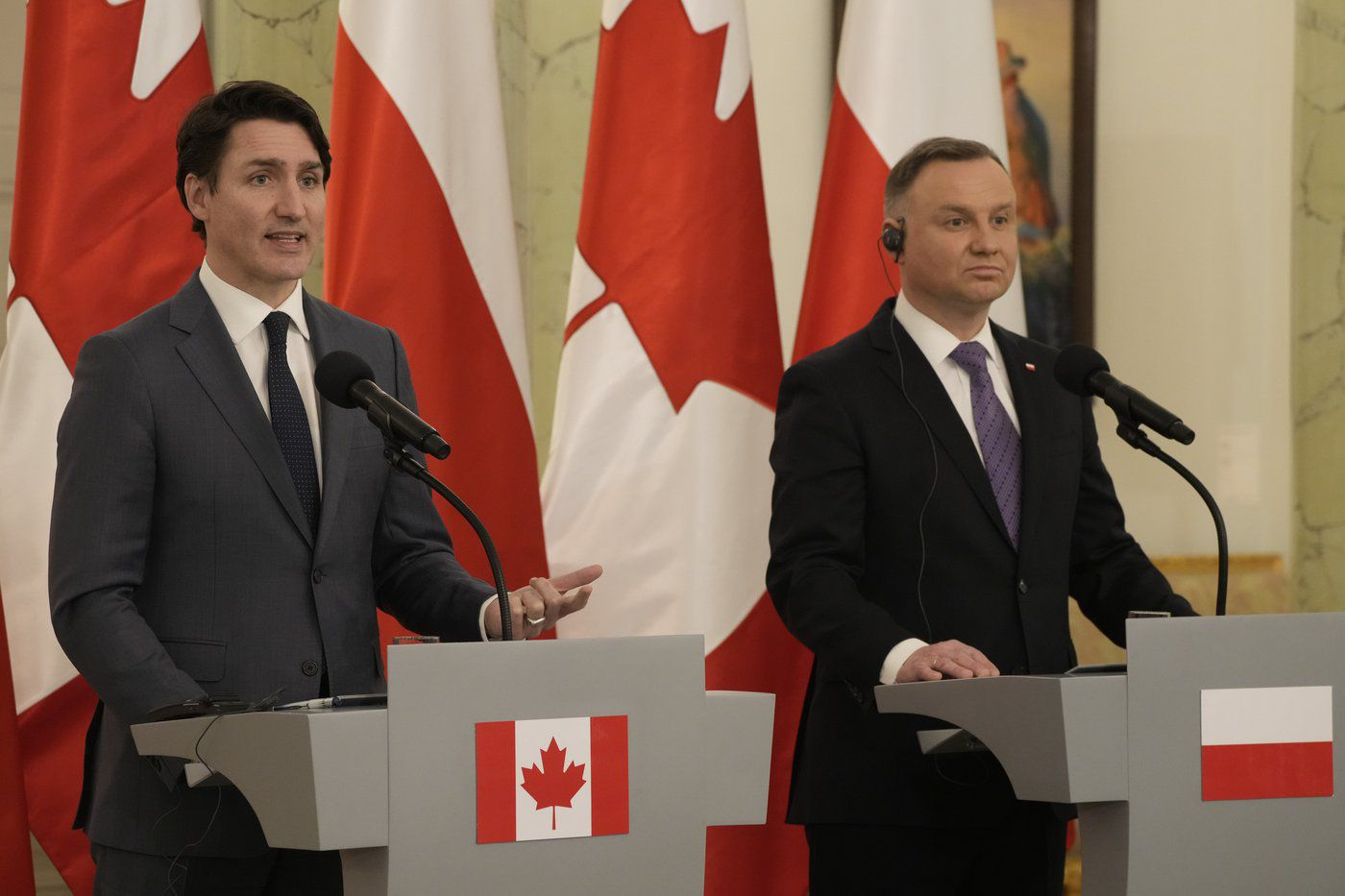 Prime Minister Justin Trudeau, left, talks to journalists during a joint press conference with Poland's President Andrzej Duda on the occasion of their meeting at Belwelder Palace, in Warsaw, Poland, on March 10, 2022. (AP-Czarek Sokolowski)
Previous story
Next story

Abramovich is one of five new Russian oligarchs added to the Canadian sanctions list for their close ties with President Vladimir Putin.

The British government says Abramovich is using Evraz to help destabilize Ukraine during Russia's invasion, and has sanctioned him over his close ties with the Kremlin.

As Trudeau announced the new sanctions before departing Warsaw on Friday, the Russian war on Ukraine appeared to be entering an ominous new phase.

Russian airstrikes on cities in western Ukraine signaled an attempt by its forces to expand its attack beyond the country's other regions further north and south.

Trudeau also said he could not rule out a Canadian airlift of Ukrainian refugees who may want to leave Europe to find a safe haven in Canada as the European continent buckles under its worst migration crisis in decades.

Meanwhile, satellite imagery showed a long convoy of artillery that had been lined up near the capital of Kyiv seemed to be dispersing into nearby towns and forests.

The continent, and indeed the world is still reeling from the Russian airstrike on a Mariupol maternity hospital that has been widely denounced as a war crime.

Mariupol. Direct strike of Russian troops at the maternity hospital. People, children are under the wreckage. Atrocity! How much longer will the world be an accomplice ignoring terror? Close the sky right now! Stop the killings! You have power but you seem to be losing humanity. pic.twitter.com/FoaNdbKH5k

The U.S. and other western countries were poised to follow Canada’s lead by revoking Russia’s favoured nation trading status, which will mean higher tariffs on Russian imports.

Trudeau met Thursday with Polish President Andrzej Duda, who told him that 100,000 people are coming from Ukraine into Poland every day, swelling his population by 1.5 million refugees.

The prime minister came face to face with the crisis when he spent time with more than a dozen refugees in a Warsaw hostel.

Trudeau also visited London, Berlin and Riga, Latvia, over the past week and spoke with leaders about how to ramp up pressure on Russia to end its invasion of Ukraine.

I invited President @ZelenskyyUa to address Canada’s Parliament. Canadians have been inspired by the bravery and resiliency of Ukrainians and the leadership the President has shown, and I know they are eager to hear directly from him.

Canadians may soon get to hear directly from Ukrainian President Volodymyr Zelenskyy, who has agreed to address Parliament next Tuesday.