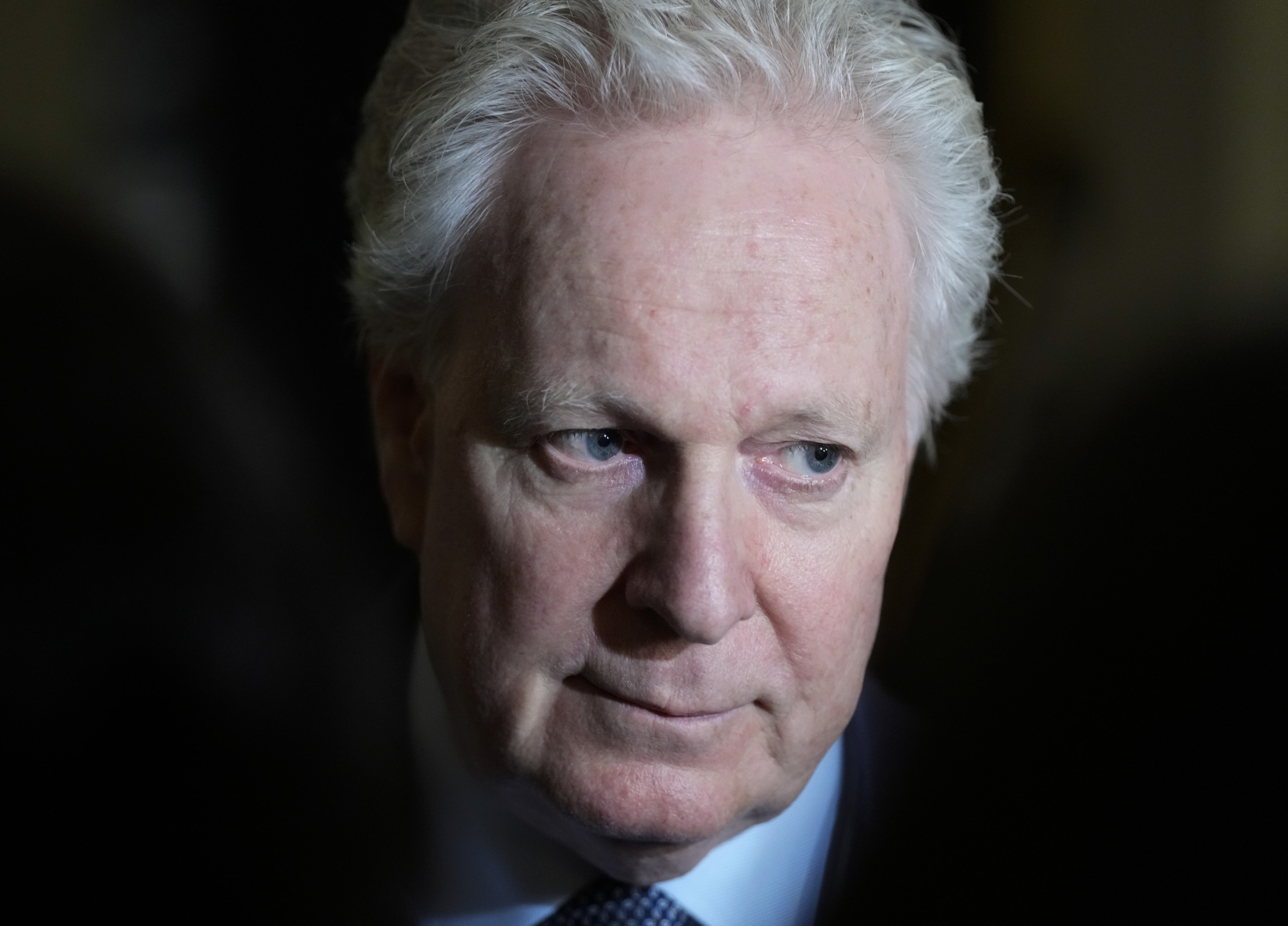 Former Quebec premier Jean Charest speaks with reporters as he considers a run for the leadership of the Conservative Party of Canada, in Ottawa, on Wednesday, March 2, 2022. THE CANADIAN PRESS/Justin Tang
Previous story

It’s now all but official: Jean Charest, the former premier of Quebec and one-time leader of the Progressive Conservative Party, will reportedly contest the leadership of the Conservative Party of Canada. There are other names being bandied about, from Leslyn Lewis to Patrick Brown, but it’s Charest who has clearly emerged as the great non-Poilievre hope. And he’s almost certainly going to get crushed.

It’s not because he wouldn’t be good at the job, mind you. With his track record at the federal level (he was the environment minister at Rio in 1992, where Canada set its first official climate goals) and an obvious ability to connect with Quebec voters, he’s almost certainly the most electable candidate the party has had since Stephen Harper vacated the job.

But the Conservative Party of Canada doesn’t seem very interested in electability right now. Instead, it wants to continue pursuing its blood feud against Justin Trudeau and his climate-oriented political agenda. And nobody is better suited for that job or its key requirements (trading in misinformation and victimhood and launching petty personal attacks) than Pierre Poilivere.

Just as federal New Democrats have a habit of purity testing their leaders on certain issues so, too, does the current version of the Conservative Party of Canada. The only difference is that the Conservatives’ idea of ideological purity revolves around opposing carbon taxes, promoting oil and gas and putting environmental concerns well behind economic ones. And on those apparently important fronts, Charest is a demonstrably impure candidate.

Back in 2015, before Trudeau’s Liberals defeated Harper, Charest was signalling his support for more action on climate change. “I think that’s good,” he said of the Liberal plan to introduce a carbon tax. “What’s important is we get some action.” Indeed, it was under his leadership as premier that Quebec introduced North America’s first carbon tax in 2007, and in a 2013 interview with former Syncrude CEO Eric Newell, he suggested a national equivalent was inevitable. "I think there is going to be a tax on carbon and I think it will happen in the next 10 to 15 years," he said.

To many Canadians, including the remaining red Tories and blue Liberals that Charest’s candidacy is clearly meant for, this track record reflects a sensible and moderate approach. It certainly worked in Quebec, where he served as premier for nine years. But to a growing portion of the Conservative Party of Canada that he wants to lead, this tepid support for a tiny carbon tax is a form of intellectual heresy — one that will not go unpunished.

Maybe Charest will lean into the controversy around his role in 2016, as an employee of TransCanada (now TC Energy), in promoting the Energy East pipeline to National Energy Board representatives in Montreal. Perhaps he can convince the petro-nationalists in his party that he alone (to channel Donald Trump) can fix the problem of Quebec’s opposition to projects like Energy East and Énergie Saguenay. And it’s possible that with enough ballots and enough competition between Poilievre and other social conservatives like Lewis, Charest can cobble together enough of the CPC’s rotten internal boroughs in Quebec to pull off the same kind of win Andrew Scheer did in 2017.

That’s certainly the hope of people like Tasha Kheiriddin, a Postmedia commentator and Navigator strategist who floated a leadership trial balloon of her own before declaring for Charest this week. “He is a guy who has a history of uniting and reaching out across boundaries, to really connect with people,” she said. “He was instrumental in the (1995 Quebec) referendum and rallied all of Canada. I mean, I was at that (unity) rally (in Montreal). I’ll never forget that moment.”

But the Conservative Party of Canada doesn’t seem all that interested in unity right now. Its leading voices are skilled in the art of polarization and divisiveness, and its loudest supporters don’t seem to want any part of Canada’s national consensus, whether it’s on vaccines or climate change. They want to break the existing order and create a new one in its place, and Jean Charest, for all of his political talents, is clearly not the man for that particular job.

It’s still possible that Conservatives have a change of heart as they approach the vote, the results of which will be announced Sept. 10. Maybe they’ll remember that the object of the exercise they’re engaged in is to actually defeat Trudeau’s Liberals and form a government, not just own the libs on social media. That’s the case Jean Charest has to make to its members over the next few months. It won’t be easy.

This is a sadly accurate

This is a sadly accurate portrait at this time. Hopefully, the "vision thing" will kick in and move the Cons into the 21st century.

Who wants a party in power

Who wants a party in power that not only refuses to compromise, but doesn't believe in cooperation! We already have 2 provincial governments like that! ALBERTA AND SASKATCHEWAN . Living as a senior in Alberta it is truly frightening at how rigid these alt right Conservatives are.

Since the Alliance Party

Since the Alliance Party willfully merged with the PC Party to become the Conservative Party of Canada in 2003, it ceased to be a fully Canadian Federal Party. Today, it's a western rump party where its interests remain 100% within the economic, environmental boundaries of Alberta and Saskatchewan. It has no interest in a united Canada, no interest in what the 'whole' of the country is capable of nor its needs. It is too busy with Harper's hat red of Trudeau as an individual with political roots in Canada and as a leader of the hat ed Liberal Party of Canada. Those credentials are all one needs to be a full fledged member of a party that wants nothing to do with the eastern portions of the country that support any other party. Divisiveness, disinformation are key to their mobilization from the very beginning with Mackay, coerced by Harper, reneging on his key promise to David Orchard back in 2003. Harper let nothing get in the way of stopping Charest running for leadership in 2020. With Harper's full bets on Poilievre, there is no way Charest has an iota of a chance in 2022.

The unspoken, ugly, elephant in this leadership contest is one I have tried to keep afloat for some time now.

In spite of their best efforts to fool people into believing that the party operating as the Conservative Party of Canada is NOT our parent's Progressive Conservatives. Not since that ominous day where Peter "Bad Day" McKay shook hands with Stephen Harper and agreed to (supposedly) merge with the so called Alliance Party has there been more than a trace of the old Tory party. By stealth, dishonesty, and brutish malevolence the Reform Party has hammered their mark onto what was once a respected political institution,

Calling themselves "Conservatives" is to fly a flag of convenience. We should reject that, and call them what they are in their heart of hearts - the Reform Party.

Agree. Harper's Reform Party being renamed in the image of his religious background, Alliance Church, has never changed its colours on the inside. The current CPC is and never will be representative of our country, Canada. As I keep saying, it is a western rump party, intent on dividing Canada through divisiveness, disinformation and yes, robo calls. They've never stopped.