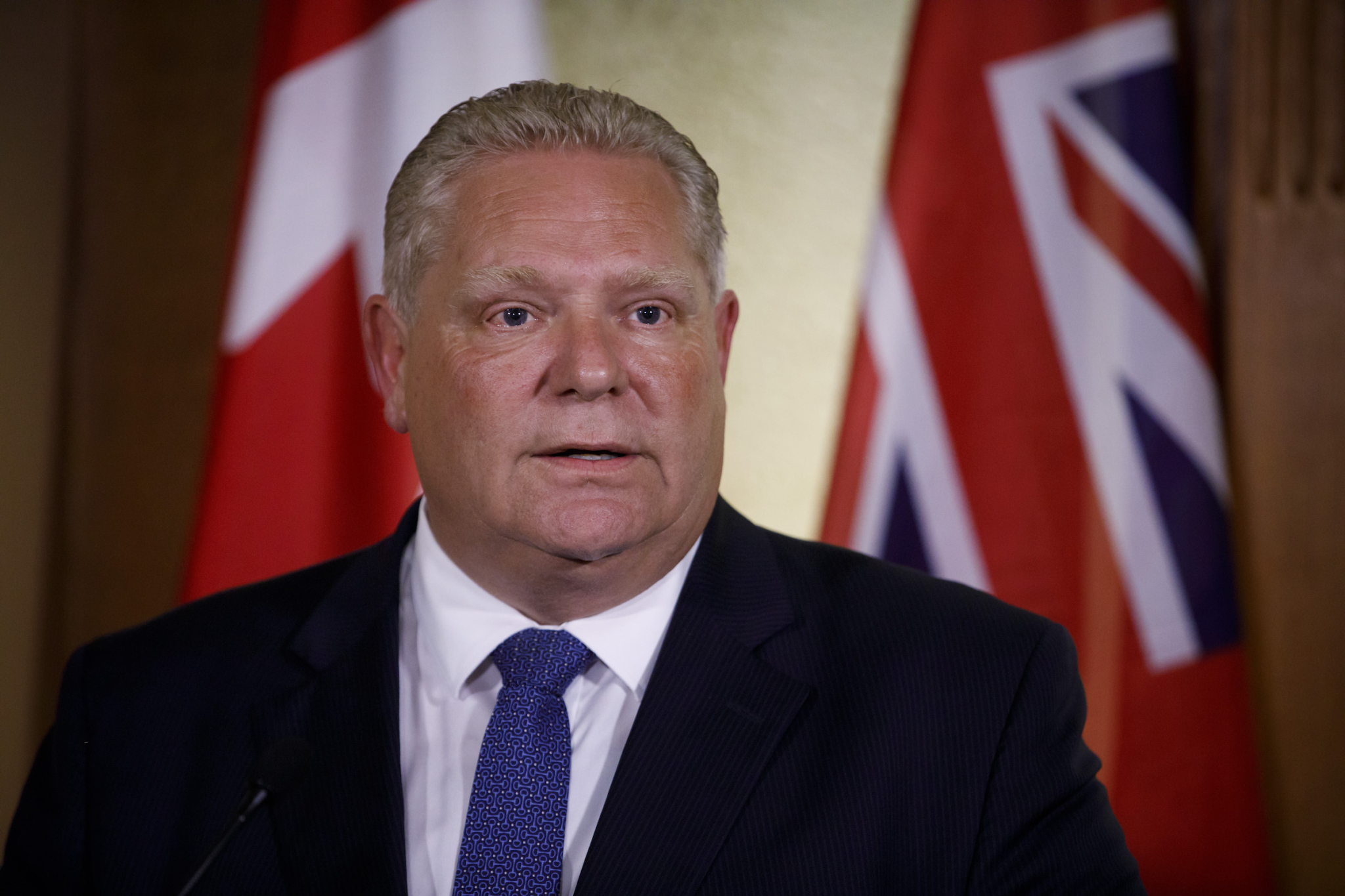 Doug Ford has clearly decided to throw whatever caution he might have left to the wind and hope for the best, writes columnist Max Fawcett. File photo by Cole Burston
Previous story
Next story

Do as I say, not as I do. Based on the comments from Dr. Kieran Moore, Ontario’s chief medical officer of health, that now seems to be unofficial policy when it comes to COVID-19. After announcing Ontario’s mask mandate would effectively be lifted provincewide on March 21, Moore was asked if he would still wear one personally. “If I go to the Eaton Centre, I’ll wear my mask,” he said. “If I go to a big box store, I’ll put my mask on.”

Moore isn’t the only top doctor in Ontario who won’t be practising what the Ford government has decided to preach. In an interview with CBC Radio’s Metro Morning, Dr. Peter Jüni, who heads Ontario's COVID-19 science advisory table, said "it's too early to tell" if the decision is the right one. "It's not supported by science right now because it's just too early. We would need at least one to two weeks more data to say, 'OK, we're stable' and we just make it to the next step.”

The refusal of provincial premiers to err on the side of caution has been a familiar theme over the course of the last two years, and it’s already done irreparable damage to the lives and livelihoods of millions of Canadians. But now, with an election in the offing, Doug Ford has clearly decided to throw whatever caution he might have left to the wind and hope for the best — or at the very least, that the worst doesn’t come until after the votes are counted in June.

What makes Ontario’s decision even more reckless is the fact that nobody actually knows how bad the current situation might still be. In a previous interview, Moore suggested Ontario’s case counts could actually be as high as 20,000 a day. As Earnscliffe Strategies principal Elly Alboim tweeted last week, “The lack of testing and reporting is tantamount to wilful suppression of information.” It also raises important questions about how the Ford government can lift the mask mandates when it doesn’t even have the data it would need to determine whether that’s prudent.

But prudence isn’t the name of the game here. Instead, it’s about gambling with other people’s chips and hoping the government can get lucky. It’s what Jason Kenney did in Alberta with his “best summer ever,” a bet that crapped out in spectacular — and disastrous — fashion. It’s what Scott Moe is doing in Saskatchewan right now, where the inconvenience of daily COVID updates has been eliminated in the name of learning to live with the virus. Even John Horgan, whose province has the highest rate of vaccination west of the Maritimes, seems to be gambling a bit with his sudden decision to lift mask mandates on March 11. And it’s what Ford has decided to do in Ontario, with an election on the way and his popularity apparently more important than the public’s health.

If we were living in more rational times and were actually guided by the principles of “peace, order and good governance” that are enshrined in our Constitution, we would continue requiring masks in public places until the pandemic was well and truly behind us. They are the most minor of inconveniences and have helped protect us from both COVID and the more familiar ravages of cold and flu season. There is every reason in the world to make them a regular feature of our public lives going forward, one that improves health-care outcomes and helps create a sense of social solidarity.

That’s especially true in our schools, where the vaccination rates for children remain far below where they’d need to be to slow the spread of the virus. According to a massive new study just released by the National Institutes of Health, one that included more than 1.1 million students and 157,000 staff attending in-person school across nine U.S. states, schools with mandatory masking policies had “approximately 72 per cent fewer cases of in-school transmission.” That alone would seem to be a pretty compelling reason to keep the masks on in Ontario’s classrooms until the end of the school year.

The one reason that won’t happen is because it’s now convenient, and effective, for conservative politicians and pundits to use masks as a wedge issue. “When we first introduced masks, we had maybe 150 cases a day in Ontario,” Dr. Nili Kaplan-Myrth, an Ottawa family doctor, told the CBC. “Now we're talking about maybe 20,000 cases a day. It just doesn't make sense.”

Even Dr. Moore, who has toed his government’s line on lifting public health measures, said as much in his Wednesday press conference. “We’re not finished with this pandemic. The risk of the virus continues.”

The problem we’re facing is that the political risks associated with not surrendering to the anti-mask (and anti-vaccine) community are apparently even greater for conservative politicians like Ford. “If you want to keep your mask on, keep it on,” he said. “If you want to take it off, take it off. But we have to move forward from this.”

Opinion: Doug Ford has clearly decided to throw whatever caution he might have left to the wind and hope for the best — or at the very least, that the worst doesn’t come until after the votes are counted in June, writes columnist @maxfawcett. #onpoli

Ontarians have no choice now but to go along for the ride — and hope it doesn’t lead the province back to where it was earlier this year. In the meantime, they might want to focus on how they can best move forward from the Ford government in June’s provincial election.

This piece has been updated to correct information about B.C. public health measures. The B.C. government lifted its mask mandate — not its vaccine mandate — on March 11.

In my opinion this article

In my opinion this article should be circulated for free. I sincerely hope that other media will pick up on these facts that were totally obvious to me and others. It does doesn’t take brain surgery to figure out why Ford stopped testing! Yet ….
I hope that Schools set their own rules. My five year old granddaughter told me that after March break she can decide on wearing a mask or not!!! I asked her if she wears a mask every day in school and if she minds, she confirmed that she does and she said it is not a big deal, even on the bus everyone wears the mask.
Unaccountability of todays political system is unforgivable. And using tax payers money to pay for lawyers to defend you is criminal.
Saying that Ford is bold or shameless is sugar coating to the max.

Thank you for allowing me to express the obvious.

In one line you nailed the

In one line you nailed the problem with ALL of Canada right now, " Unaccountability of todays political system" It doesn't matter the level of government, it doesn't matter what party. WE have ALLOWED our politicians to become completely unaccountable to us, and only to their corporate masters and donors. At least in the past, they feigned concern for the electorate. Now we are "allowed" to have democracy one day every four years, with tyranny, unaccountable governing, and outright corruption ruling us for the other 1459 days. Pretend to be informed, vote the way you always have, be disappointed and abuse, repeat.

Personally, I like Ford better with his mask on. It tended to muffle what he was saying. Using an N95 mask would have muffled him further. I'd be all for an N300 mask for most politicians as a strategy for general improvement in the quality of government.
That said, we're still going to be wearing masks in this family while out in public, and will continue to keep social mixing to a low level, while requiring quick-test cycles before this limited mixing. We're not done with this pandemic yet, and there is no scientific evidence to suggest that this is the last wave, or that this is the last variant we face, or that the next variant won't be more virulent than the last.
It's quite possible that the next wave will hit about election time, and Ford will have a Kenney Moment at the worst possible time politically. It would be too bad for Ontarians as well, but Ontarians elected this government in the last election, and you reap what you sew. We need to bear that in mind in this coming election. Beware clowns bearing slogans!

Oops... that should be Reap

Oops... that should be Reap what you sow.

If not now, then when?

If not now, then when?

I don't mean to be facetious. We know that Ford is lifting the mandate because politics, but honestly, if now isn't the time, then when is it? We're never getting to COVID zero.

I'm in the middle of a US road trip, and no one is wearing a mask except my partner and me. And, I'm fine with that. It's time to go back to taking responsibility and stop relying on politicians. Especially the politicians we've stuck ourselves with from the municipal to the federal level. They've all played politics with our health over the past two years, and continue to do so.

It's time to move on. Do what's right for you and your community.