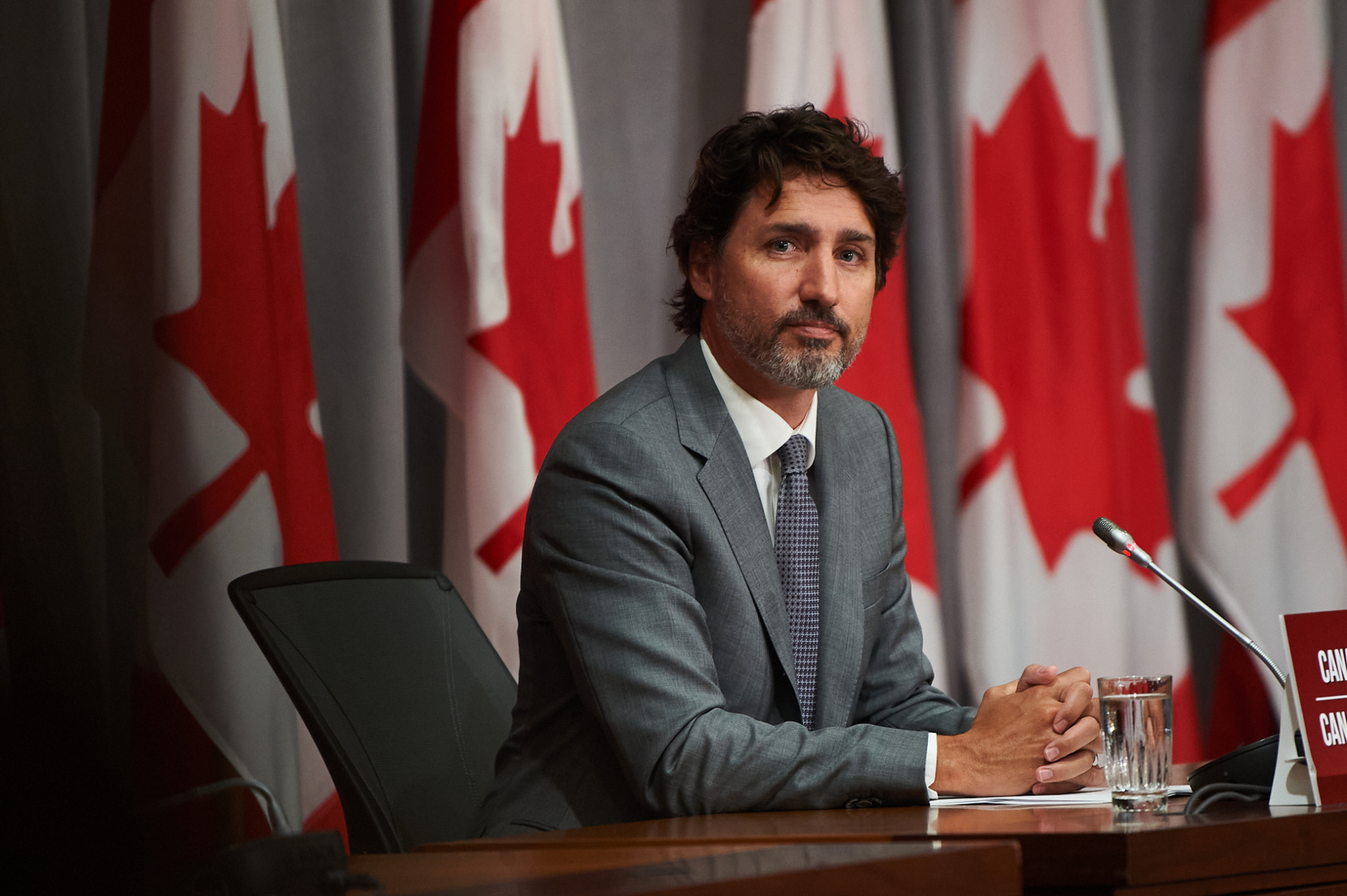 “If it bleeds, it leads.” That used to be the unspoken rule of thumb for journalists charged with deciding which stories deserved a spotlight. But now, it’s evolved into something different: “If it clicks, it sticks.” And that hunt for eyeballs has rarely been as obvious, or as problematic, as it was during Justin Trudeau’s recent trip to Europe and the coverage that ensued.

Trudeau travelled to Brussels, to deliver remarks to the European Parliament, and he received a standing ovation from most of the assembled members. But it was the attacks launched on him by two far-right members of the European Parliament (MEPs, of which the body has 705 representatives in total) that somehow managed to capture the headlines and steal the show.

One of those MEPs, Croatia’s Mislav Kolakušić, recently compared vaccine mandates to the death penalty and suggested tens of thousands of Europeans had died as a result of getting COVID-19 vaccines. He was, of course, completely wrong, but that clearly hasn’t changed his opinion about vaccines. In his speech to the European Parliament, he said Canada seems like a “dictatorship of the worst kind” and “a regime that wants to destroy the freedom of citizens, either by bombs or harmful pharmaceutical products.”

The other set of remarks being lauded in anti-Trudeau circles came from Christine Anderson, a member of the Alternative für Deutschland, an openly anti-Islam, anti-immigrant party. Anderson ended her speech by telling Trudeau he was a “disgrace for any democracy,” which is ironic given that her party was recently put under surveillance by Germany’s Federal Office for the Protection of the Constitution for its “anti-constitutional goals.”

Indeed, that decision was upheld by the country’s courts on the basis of it presenting — I kid you not — a threat to democracy. And no wonder: as the BBC noted in 2020, the party’s rhetoric has “been tinged with Nazi overtones,” including its co-founder Alexander Gauland describing Nazism as “just a speck of bird’s muck in more than 1,000 years of successful German history.”

Bernhard Zimniok, another member of the AfD, echoed his colleague’s ironic comments about Trudeau and democracy. Romania’s Cristian-Vasile Terheş, the fourth dissenting voice, filed (and lost) a human rights complaint in which he argued the March 2020 lockdown in his country was tantamount to house arrest. In his remarks, he compared Trudeau to Nicolae Ceaușescu, the Romanian communist dictator who was eventually executed for his crimes.

The other members of the European Parliament, who greeted Canada’s prime minister in far less hostile terms, didn’t seem to warrant a mention in the coverage that ensued. Instead, it focused on the speeches given by his far-right critics. As the National Post reported, the videos of them have already been watched millions of times, and they’ve been boosted here at home by a wide array of familiar conservative faces and groups.

It was splashed all over the front pages of right-wing media fronts like True North and the Post-Millennial, along with the growing universe of anti-Trudeau Facebook groups they feed like Canada Proud. But their narrative — that Europe was somehow united in its condemnation of Trudeau — was carried by mainstream outlets as well. The Post’s headline, for example, blared that “European MPs denounce Trudeau's handling of convoy protest,” which CTV’s Don Martin dutifully tweeted out from his account. The Globe and Mail hardly did much better, amplifying Anderson’s ironic quote about democracy in its own headline (that it subsequently changed).

As Global’s David Akin noted, the noise coming from these far-right MEPs didn’t accurately represent the signal in the room. “Seven MEPs representing parties that hold 664 of 705 seats had nice things to say about Trudeau/Canada,” he tweeted. But people saying nice things about Trudeau doesn’t get clicks in our current media landscape, and it doesn’t drive the kind of anger that plays so well on social media.

Even so, the way these speeches have been framed by the media and greeted by so many conservative activists and personalities should raise questions for the rest of us. It’s understandable that people who oppose the prime minister would latch onto comments critical of him, just as Liberals or New Democrats might do when they’re directed at their political opponents. The confirmation bias is, after all, one hell of a drug, and that’s doubly true when it comes to partisans. But when those comments come from anti-vaccine conspiracy theorists or Nazi apologists, is the hit really worth the hangover?

Opinion: People saying nice things about Justin Trudeau doesn’t get clicks in our current media landscape, and it doesn’t drive the kind of anger that plays so well on social media, writes columnist @maxfawcett. #Politics #CdnPoli

That’s a question for Canada’s conservatives, who seem increasingly addicted to getting one over on the prime minister. But it’s also one that some members of the mainstream media, which seem nearly as hooked on the clicks that can come from them, might want to start answering.

Ah, the good old Post Media National Post headlining anti Trudeau comments by a despicable minority! What else is new. We in the West only have Post Media. Except Winnipeg Free Press. With Staples in the Edmonton Journal and Danielle in the Calgary Herald, it is so tedious to read & listen to the conveyor belt of irrelevant right wing propaganda. Discouraging as they seem to have lost touch with what the media is for in a democracy.

Indeed. I keep mentioning Steve Bannon's reply when asked how one should "handle" the media, to which he replied, "flood the zone with bullshit." Which they are, distressingly.
Max makes a good point though about both the avidity AND the irrationality of the Trudeau hatred thing, which really has taken on a life of its own. It's SO stoked online and has been for years on social media that you start to wonder if he's in real danger of being killed somehow. I think he may well be grooming Chrystia Freeland as replacement though, and the fact that he can be seen as being both open to and capable of that says something.

One theory is that too many

One theory is that too many folks on the right admired Vladimir Putin merely for being a strongman, who became 'homo odio' so suddenly after his invasion of Ukraine that they are left grasping at straws, like Trudeau.

The French darling of demagogue love and liberal hate, Marine le Pen, who is running in the current campaign for president of France, had to toss her expensive alt right campaign literature very late in the game that featured glossy photos of her and Putin hugging and kissing cheeks.

Ditto an Italian right wing politico who tried to reverse his recent pro-Putin messaging by appearing in a Polish border town to "greet" Ukrainian refugees fleeing for their lives ... in front of the cameras, of course. He was called out in front of the same cameras by a pro-immigrant Polish journalist who knew who he was.

It's not a surprise that Post Media would report widely on an anti-Trudeau story. But the Globe has columnists like Doug Saunders who regularly report with verifiable evidence on the shortcomings of European politicians, not the least those on the alt right, sometimes in counterpoint with other Globe reports.

We have a climate plan that

We have a climate plan that the fossil fuel industry says they can live with, but what does Premier Kenney say, I'll fight it. His constant dog whistling and gaslighting about Trudeau shows me who he favours! Trump like dictators from foreign countries. But the 2 frightening things about our Prairie Province Premiers are their disbelief in climate change and their political agenda to eliminate government Alberta has been passing legislation that alters the financing of elections in Alberta to favour the the influence of money, and another 25 + bills that are incrementally reducing our rights to freedom, association, protest , forming unions and privatizing every public asset and service. He is making political polarization normal, step by step,just like our USA neighborus have. Voting every 4 years isn't enough, be more active.