Some provinces rolling out COVID measures to fight sixth wave 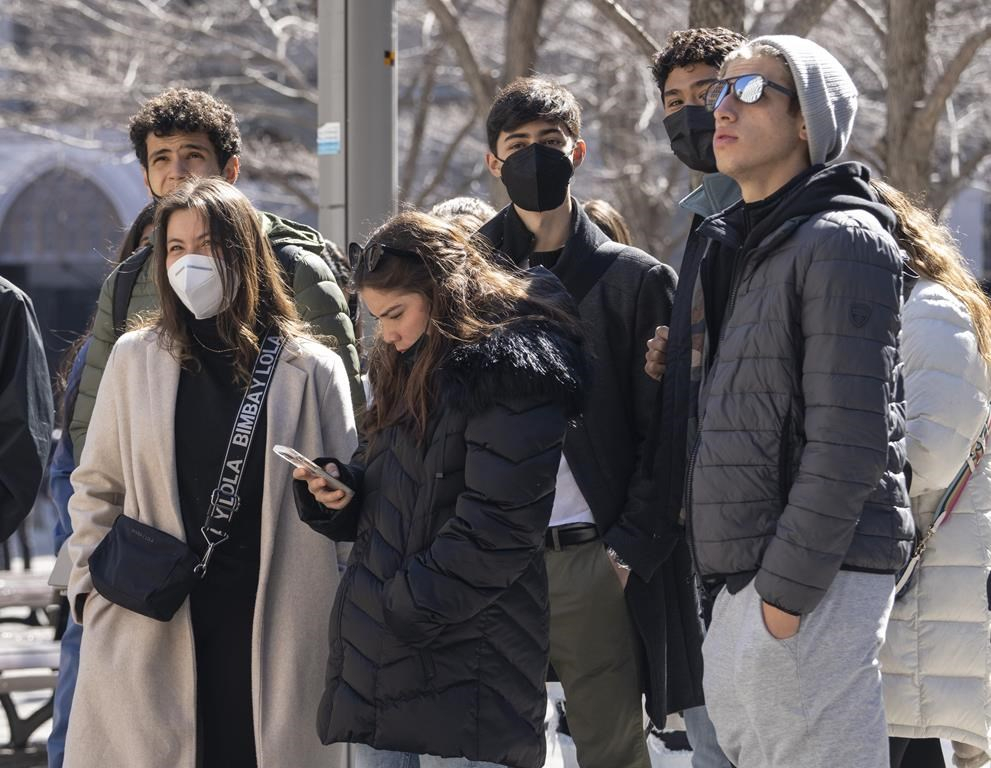 Tourists in masks take in the sights on April 5, 2022 in Montreal. Quebec has announced it will be extending mandatory masking in indoor public places until the end of April. THE CANADIAN PRESS/Ryan Remiorz
Previous story

Several Canadian provinces are bolstering their defences against COVID-19 amid signs of a sixth wave.

On Tuesday, Quebec and Prince Edward Island extended their provincial mask mandates until later this month as they try to prevent the spread of COVID-19.

Quebec, Ontario and British Columbia also said they would be expanding access to fourth doses of COVID-19 vaccines as the National Advisory Committee on Immunization said all provinces and territories should prepare to start offering the boosters.

The decisions came several days after the Public Health Agency of Canada said a resurgence of COVID-19 appears to be underway and encouraged Canadians to be vigilant to help curb the spread of the latest variant.

In Quebec City, interim public health director Dr. Luc Boileau said he was extending a mask mandate until the end of April due to a rise in infections and hospitalizations across the province.

The Health Department reported a 72-patient increase in COVID-19 hospitalizations Tuesday for a total number of patients with the infection of 1,479.

"Despite everything, the situation for hospitals is under control," Boileau said.

Masking is an effective way to reduce COVID-19 transmission, said Boileau, who added that while not everyone likes having to wear a mask, the health order is an "acceptable restriction in the current situation."

Several Canadian provinces are bolstering their defences against COVID-19 amid signs of a sixth wave. #COVID19

P.E.I.'s chief public health officer, Dr. Heather Morrison, said masks are more effective against the virus when there is a universal requirement to wear them. Plans are moving more slowly than had been hoped.

"Masks do matter," she said. "Masks will be one of the last measures lifted."

However, P.E.I. was to end all gathering and capacity limits as of midnight Tuesday. Morrison said cases are not growing as sharply as in other jurisdictions.

"The fact that we are not seeing exponential growth may be attributed to the gradual easing of public health measures and that masks remain mandatory in indoor public places, including schools."

Other provinces have resisted calls to reimpose public health restrictions, including mask mandates, even as cases have risen in some parts of the country.

Dr. Bonnie Henry, provincial health officer for British Columbia, said the province is in a reasonably good position. Transmissions, hospitalizations and deaths are all down.

She said that means it's time to move away from public health orders. The province is, however, offering a fourth dose of vaccine to seniors. That is to start with residents of long-term care and assisted-living homes and, in the coming weeks, is to include people over age 70 in the community.

Quebec said it would also be expanding access to fourth doses, while Ontario said it would announce a plan Wednesday to start offering an additional booster to people 60 and older.

"Our medical advisers have recommended ... that we go to 60 to provide an added level of protection to the residents of Ontario," Health Minister Christine Elliott said at the provincial legislature.

Fourth doses in Ontario are already available to long-term care and retirement home residents, as well as to those who are immunocompromised.

The Ontario government's plan comes as hospitalizations there are also rising. The province reported 1,091 people in hospital with COVID-19, nearly 40 per cent higher than a week ago.

Ontario ended mask mandates in most public spaces two weeks ago, with the exception of public transit and health-care settings.

— With files from Kevin Bissett in Fredericton, Jacob Serebrin in Quebec and Holly McKenzie-Sutter in Toronto