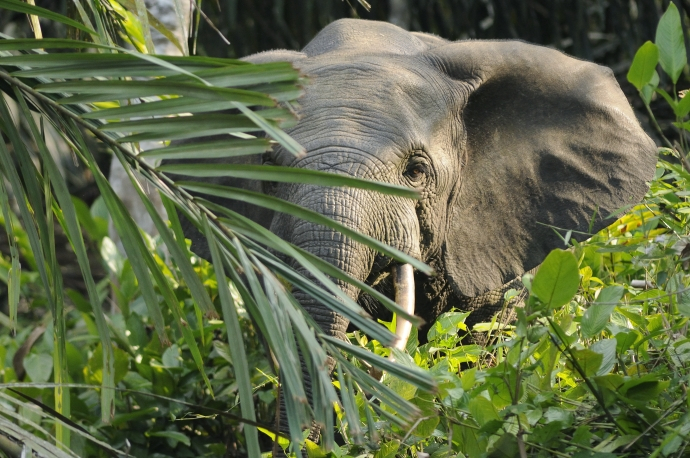 The African forest elephant. Gabon, which is the last bastion of the sub-species, called for developed countries to provide $100 billion a year of biodiversity finance in Geneva. Photo by dsg-photo.com/ Wikimedia Commons (CC BY-SA 3.0)
Previous story
Next story

For talks that are meant to be about halting the mass extinction of life on Earth, the slow pace of negotiations in Geneva ahead of COP15, the major biodiversity summit in Kunming, China, later this year, was not a hopeful sign that meaningful action would follow. As discussions drew to a close last week, little progress was made on the targets and goals that are meant to herald nature’s “Paris moment.”

Rhetoric from rich developed nations about the need for ambition on halting biodiversity loss was not being followed through with resources, negotiators from Latin America, the Caribbean and Africa complained.

Once again, much was being asked of the developing world without financial help to enact the change deemed necessary by nations that long ago cleared their forests, drained their wetlands and polluted their rivers to industrialize.

Governments have never met their own targets on halting the destruction of ecosystems despite bleak scientific warnings about species extinctions and the consequences for humans. But many world leaders suggested that this decade’s global biodiversity framework would be different, acknowledging scientists’ warning that humanity must solve the climate and nature crises together or solve neither.

Last September, French President Emmanuel Macron told a conservation summit in Marseille that there was “no vaccine for a sick planet.” The European Commission president, Ursula von der Leyen, told last year’s Davos summit that the world needed a Paris Agreement for nature. The U.K. put forests and wetlands at the heart of its COP26 presidency in Glasgow, signing up to the leaders’ pledge for nature in September 2020 as part of “meaningful action” on nature.

But rich countries’ failure to provide at least $100 billion a year of climate finance to the developing world at COP26 in Glasgow has undermined trust and that is spilling over into the biodiversity process.

In the final plenary session in Geneva on Tuesday, Gabon — speaking on behalf of the Africa group, Brazil, India and other developing countries, also supported by China — called for developed countries to commit to providing $100 billion a year of biodiversity finance from public and provide sources, which would rise to $700 billion by 2030, closing the “nature funding gap.”

Talks ahead of the key COP15 summit on halting mass extinction of life were slow — and much has been asked of the developing world. #Biodiversity #Ecosystems #Wildlife #Geneva

Gabon’s representative said: “This must be new, additional and separate to the financing that has been committed under the UNFCCC and the Paris Agreement. The current architecture for global biodiversity financing should be transformed.”

The 2010 Aichi targets, agreed in Japan in the wake of the global financial crisis, failed partly because of a lack of resources for the agreement, say experts. This time, COVID-19, rising inflation and the war in Ukraine are all significant impediments to more money for nature, even if more than half of global GDP relies on high-functioning biodiversity.

One African negotiator said: “To get out of this standoff between developing and developed countries, we need something transformative but it’s not going to be like the climate.

“Developing countries will just not compromise their sovereignty over their trees, soils, people and right to develop to the same extent that they would be willing to do for climate change,” they said.

The final plenary session also saw a lengthy standoff over biopiracy, which some fear could scupper the entire agreement, as developing countries demand they are paid for drug discoveries and other commercial products based on their biodiversity.

This, along with targets on money, protected areas, restoration, pesticides and plastics, will be discussed at an extra meeting in Nairobi in June ahead of COP15 in Kunming. Then, it will be up to governments whether or not to back their rhetoric with action at the summit.

Progress … at last
After months of Zoom meetings and false starts, Geneva provided the moment when negotiators met for talks in person for the first time since March 2020.

There was much to disagree about but time spent together — as well as drinking and eating in the Geneva sun — helped bring back some momentum to the process. Small steps towards COP15 were finally taken.

Governments agree to negotiating text
At the beginning of the talks in mid-March, negotiators could have thrown out the entire draft text and disputed the targets and goals that will make up this decade’s global biodiversity framework. That did not happen.

While delegates left Geneva with much of the text in brackets, governments have agreed a stable negotiating text. It will include targets on subsidies, protected areas and invasive species. The ambition is now up to negotiators.

Business demands more
While the role of big business in a UN environmental process should often be treated with skepticism, the Business for Nature coalition played an active role in negotiations, with companies such as H&M urging governments to agree to a target for mandatory nature-related disclosures for companies.

If this is going to be a transformational moment for nature, all parts of society need to sign up, including businesses small and large.

Will COP15 in Kunming ever happen?
With COP15 due to be staged in Kunming, China has the presidency for a major international environmental conference for the first time. Yet despite assurances from the UN that the summit would take place in late August, Beijing has still not told countries when COP15 is happening, how they will get there and how their zero-COVID policy might affect the summit.

Rumours of charter flights and a Winter Olympics-style bubble were widespread in Geneva, but only the Chinese presidency really knows what is going on.

Ambition and action remain miles apart
Ahead of the final weekend, WWF, the RSPB and other leading conservation organizations warned that “nowhere near enough progress is being made” in a joint statement, highlighting a “yawning gap” between the draft deal and the bleak picture described by the science.

Most scientists agree that humanity is driving the sixth mass extinction of life on Earth, the worst loss of life on the planet since the time of the dinosaurs. Yet the political energy expended on biodiversity negotiations is still lacking, and still overshadowed by climate talks.

There is major disagreement over money and the use of digital sequence information (DSI) of genetic biodiversity, known as biopiracy. Negotiators and the Chinese government will need to work hard in the coming months to avoid a disastrous scenario where no final agreement on the text can be reached.