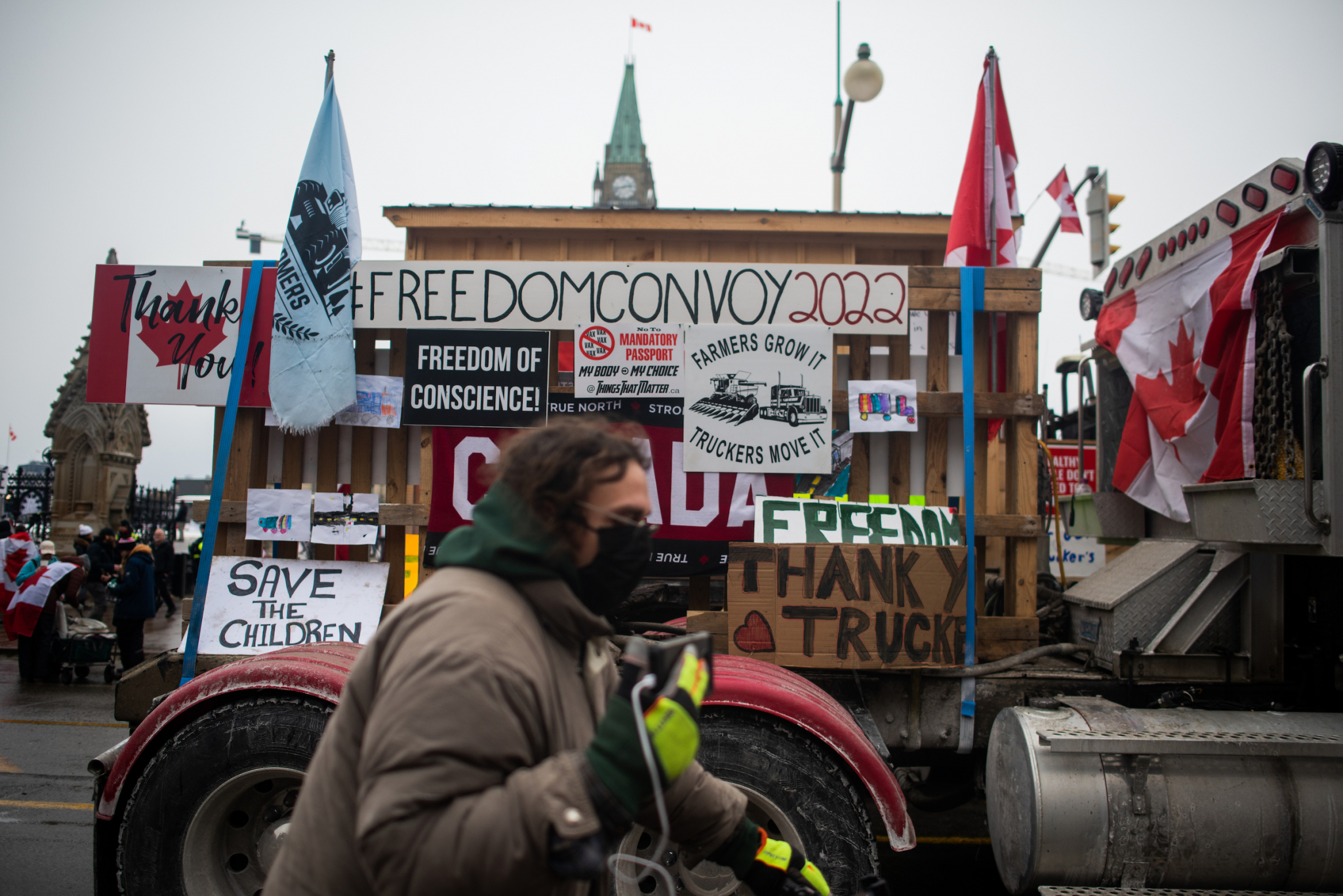 A biker rides past a truck decorated with anti-COVID-19 mandate sentiments during a protest in Ottawa on Wednesday, Feb. 2, 2022. Photo by Spencer Colby / Canada's National Observer
Previous story
Next story

“I did some digging you may be interested in.”

That was the direct message I received on Twitter at 3:21 a.m. on Feb. 14. It was a few hours after hackers had released a load of data from the GiveSendGo fundraising campaign for the convoy protests in Ottawa. The anonymous Twitter user linked me to a thread they’d been compiling of the largest donations made by Canadians. The claims were shocking: an Ontario business mogul pitched in $25,000. A New Brunswick man alone gave $75,000. Could this be true?

I spent the next day straining my eyes, hunched over a spreadsheet document on my laptop which apparently showed all 90,000+ donations to the campaign that raised over $8 million. Many people donated through work-related email accounts, which made tracking them down easier. My Twitter friend’s list got me started, but I had to be sure. If we published their names without confirming the donation, we would risk getting sued.

After combing through the data, I made a list of my own of the top Canadian donors. I copied names, emails, and postal codes, and dug around for phone numbers. Then I started making calls.

Karyn Pugliese and Linda Solomon Wood: let's change the course of history together

Most people wouldn’t speak with me. They had secretaries or assistants take my messages, or decline an interview on their behalf. I called again, and left messages again. I followed up via email, two or three times.

At the same time, other information trickled out that confirmed what I suspected: Brad Howland of New Brunswick admitted via his company’s Facebook page that he donated $75,000. Global News confirmed that Ontario real estate tycoon Holden Rhodes gave $25,000. A Langley, B.C. shooting range confirmed via their website that their owner Dustin Sikora’s $18,000 donation was authentic. It looked more and more like the list was real.

Then, a Montreal entrepreneur who donated $3000 responded to my emails and explained his support of the protests. He told me that to him, the vaccine mandate issues were as grave as the climate crisis. He said he planned to spend the same amount, or more, on carbon offsets.

I had a hard time computing this: how could someone hold a nationalist, populist movement with roots in the far-right on the same level as the freaking climate crisis? He wasn’t an avowed, science-denying, white nationalist caricature. His concern seemed genuine and measured.

Then it hit me: disinformation.

Take action to defend democracy in this historical moment. Your donations allow CNO to break stories on the disinformation crisis impacting Canadians.


The long, gangrenous arm of disinformation has claimed so many brains over the course of the pandemic. People have been more isolated than ever from their communities, which has bred two results: a deep feeling of alienation and sadness, and susceptibility to information that doesn’t get checked or vetted in the way it might, say, if it were brought up at a friendly gathering or a workplace hangout. Ideas and claims that would normally get shut down in a day with a, ‘That’s ridiculous, check your facts,’ have festered and taken root.

The alienation and sadness, too, are boons to far-right disinformation: they’re often the bedrock of far-right movements, the preconditions upon which fascists and their ilk build campaigns of hatred, scapegoating, and ultra-nationalism.

The disinformation machine can’t be stopped at this point. Right now the best way to fight it, and centre the truths that matter, is work together to produce media that reports the facts and how those truths impact our lives.

That work takes time and resources. It took me a few days to parse through the data and make sure my reporting was accurate. And it wasn’t just my work: my editors shaped the story into the best version of itself, with the clearest facts. Then, of course, it all goes back to that anonymous Twitter DM that put me on the scent in the first place. It takes a village to produce this sort of journalism that exposes power and money, and how they seek to impact our future.

That’s why I’m asking you to donate to help Canada’s National Observer battle disinformation in a frightening world. This is what we do, and we’re good at it. But we need your support to continue producing hard-hitting, factual public interest journalism that brings truth and clarity to the increasingly muddy information landscape we’re stuck in.

I keep thinking back to that Montreal entrepreneur, and the split realities he seemed to live in: one where the chief threat to our lives was vaccine mandates, and one where it was the climate crisis. Disinformation campaigns are leveling up their reach and stealth; they can integrate themselves into our reality now.

That means I need to double down on my work too, and take it to the next level. I can’t do it alone. I need your help.