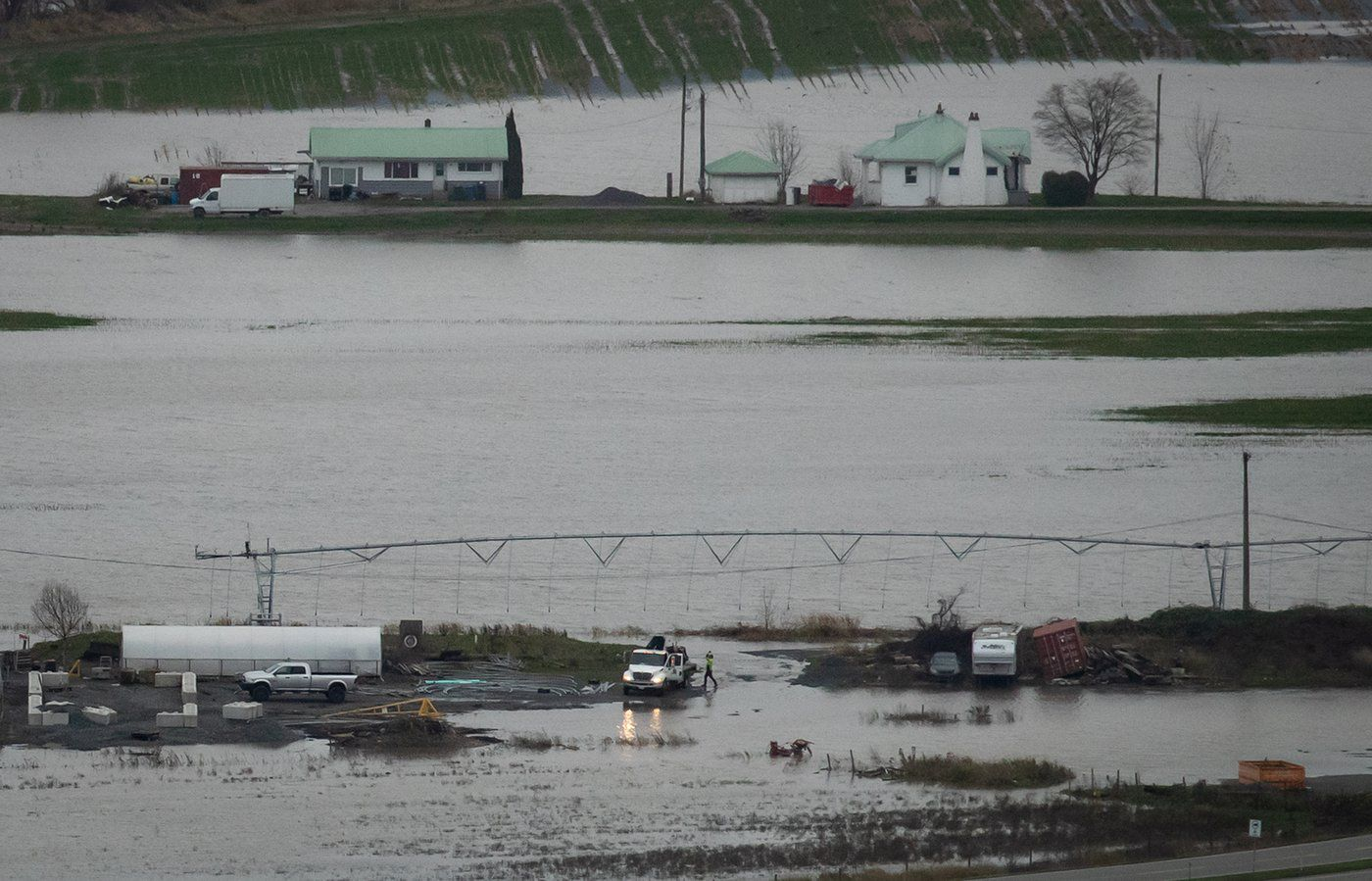 A person stands outside a truck at a greenhouse supply store and nursery surrounded by flooded farmland in Abbotsford, B.C., on Wednesday, Dec. 1, 2021. File photo by The Canadian Press/Darryl Dyck
Previous story

British Columbia mayors whose communities were devastated by last year's flooding and wildfires want the federal government to deliver billions of dollars in promised funding as soon as possible.

Abbotsford Mayor Henry Braun said he was among 28 mayors and members of regional districts who met with federal and provincial politicians Monday to ask about the delivery of $5 billion from Ottawa.

He said the estimated cost of bringing three dikes up to provincial standards following unprecedented flooding on the Sumas Prairie is as high as $2.9 billion, with most of the funds expected to come from the federal government.

"There was nothing in that meeting that I haven't already shared with both Minister Farnworth and Minister Blair over the last number of months," he said.

In November, the banks of the Nooksack River in Washington state overflowed, flooding the Sumas Prairie in Abbotsford as a record-shattering 540 millimetres of rain fell.

"Construction companies are hard to find, consultants are hard to find right now because there is so much damage that was done," Braun said of repairs or new infrastructure needed, which could take five years, depending on public feedback on four possible options involving a pump station and dikes.

The preferred option will be presented in about six weeks to council for a report, which would be sent to senior levels of government, Braun said.

Blair said Monday he sees the urgency of facilitating recovery efforts in various areas of the province and has heard the concerns of mayors about destruction from floods and a wildfire that nearly destroyed the town of Lytton last summer.

He did not provide a timeline for when the money would be disbursed to communities but said there are some complexities in making decisions about prioritizing the spending of a limited amount of funding that will involve "difficult decisions."

#BC #mayors dealing with #flooding and #wildfire damage call on feds to deliver funds. #CDNPoli #BCFloods

"That's why we are working collaboratively together to establish an appropriate governance structure that listens to the important perspectives and the needs of all orders of government and First Nations," he said.

"There are engineering studies, there are environmental assessments and approval processes that need to take place. We're going to make sure that's done right, and we need to invest in those things that will have the greatest impact."

British Columbia has made a preliminary submission of about $4 billion for recovery efforts, he said of the "enormous amount of work" involved in rebuilding communities like Lytton and Merritt, where many residents remain displaced.

Blair said he met with Linda Brown, the mayor of Merritt, about three weeks ago and she introduced him to residents whose homes were washed away.

"One of the things that Mayor Brown made very clear to me is that there are many people in the town of Merritt, over 200, who are still in difficult interim housing situations. And many people living, as well, with the uncertainty and anxiety of wanting to know when that recovery will take place and how, going forward, their community can be protected from similar events."

Farnworth said an announcement is expected to be made "in very, very short order" regarding housing in Merritt.

B.C. earmarked $2.1 billion in its latest budget to fund disaster recovery efforts and future response to the threats posed by wildfires, floods and heat waves.

Farnworth and Blair also joined other federal and provincial leaders Monday for the third meeting since January of a committee on disaster response and climate resilience related to wildfires, flooding and an unprecedented heat dome that killed nearly 600 people in B.C. last year.

Ken Gillis, board chair of the Thompson-Nicola Regional District, said many mayors who met with Blair and Farnworth were hoping they would announce the allocation of long-awaited funds.

"There seems to be a snag in delivery," he said. "That's what most of the people who spoke today brought to their attention. Everybody said, 'Look, we've got to find a way to get this happening faster, and we can't operate without having this funding delivered to us.'"

This report by The Canadian Press was first published April 11, 2022.