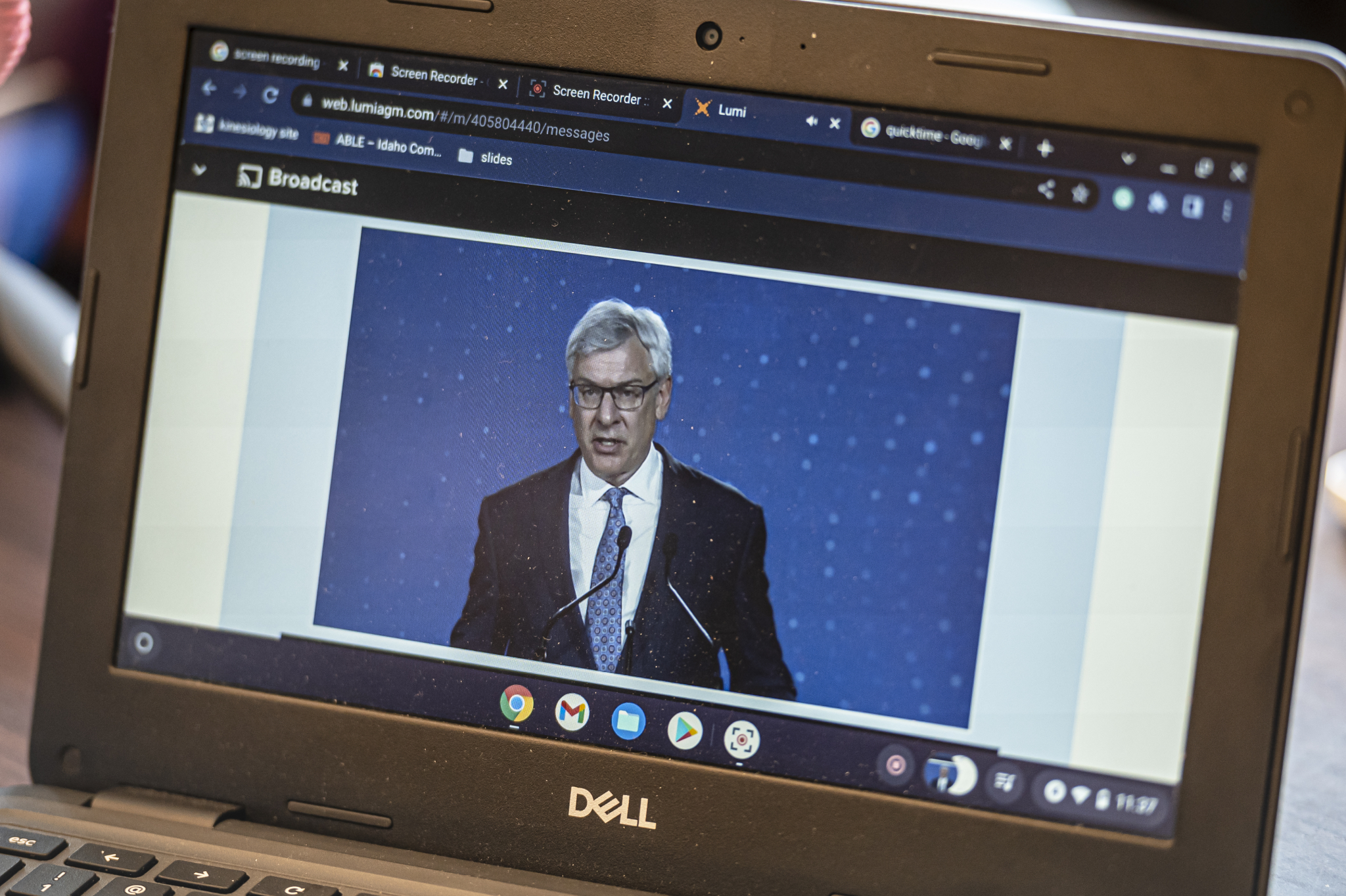 With annual meeting season in the rearview mirror, Canada’s largest banks can agree on one thing: they sure don’t want shareholders influencing environmental policies.

Each of the Big 5 banks — RBC, TD, Scotiabank, BMO and CIBC — faced shareholder resolutions this year aimed at things like curbing lending to fossil fuel companies, stepping up their role in building a circular economy and setting up annual advisory votes to guide banks’ climate performance.

Despite promising to achieve net-zero greenhouse gas emissions and joining both the Net-Zero Banking Alliance and the Glasgow Financial Alliance for Net Zero last year, the Big 5 all told shareholders to shoot down climate resolutions, and shareholders listened. Not a single resolution came close to passing.

Here is what happened.

The Royal Bank of Canada is the country’s top financier of fossil fuels, and fifth-largest in the world, with more than $260 billion loaned to coal, oil or gas companies since 2016. Its annual meeting earlier this month was roundly criticized after Wet’suwet’en hereditary leadership travelled to Toronto to challenge RBC executives over the bank’s financing of the Coastal GasLink pipeline but were unable to attend the in-person version of the meeting. That’s because it was abruptly cancelled the night before, with the bank citing a COVID-19 case that “impacted a number of critical annual meeting staff members and participants” as the reason.

One was a proposal filed by Investors for Paris Compliance that sought to prevent the bank from lending to fossil fuel companies under the label “sustainable finance.”

Canada’s largest banks can agree on one thing: they sure don’t want shareholders influencing environmental policies. Here's what happened at their annual meetings. #cdnpoli #FinancingDisaster


“We’re disappointed that more big institutional investors — including the banks — didn’t vote to tackle the greenwashing of sustainable finance, but we’re pleased we could draw some attention to this critical issue,” Investors for Paris Compliance director of corporate engagement Matt Price said in a statement. “Ultimately, the regulator needs to step in to ensure the integrity of these products if banks and investors won’t do it themselves.”

Another proposal, if passed, would have prevented RBC from participating in “pollution-intensive asset privatizations.” These are transactions that take heavily polluting assets off the books of a public company by selling them to a private firm. For example, if a publicly traded fossil fuel company wanted to improve its reported greenhouse gas emissions, it could sell an emission-intensive asset (like a coal mine) to a privately held company that doesn’t have the same rules around disclosing emissions. On paper, this is one way carbon-intensive industries can clean up their emissions, but in the real world, global emissions don’t actually fall if that coal mine is still operating under a private owner.

A third proposal, if passed, would have seen RBC adopt an annual advisory vote on its environmental policies and action plan.


The fourth climate-related proposal RBC shareholders voted on would have required the bank to file a report outlining the loans and grants it provided in support of a circular economy, which aims to produce and consume goods in more sustainable ways by promoting reuse, repair, recycling and other methods to extend the life of a product.

With just under $200 billion loaned to fossil fuel companies since the Paris Agreement was signed, Scotiabank is the country’s second-largest financier of fossil fuels. It faced two climate-related shareholder resolutions this year.

The first sought to establish an annual vote on the bank’s environmental policies and action plan. Scotiabank told shareholders it agrees climate targets should be disclosed but said shareholders having a say on a climate vote “is not an appropriate mechanism to demonstrate our commitment to these important strategic matters.” The bank recommended shareholders vote against the proposal.


The second shareholder resolution would have seen Scotiabank’s board of directors create a climate change and environment committee. The bank said its executives already have an environmental, social and governance committee and recommended shareholders vote against the proposal.

With $183 billion loaned to coal, oil or gas companies since 2016, Toronto-Dominion Bank is ranked third among Canada’s top fossil fuel financiers. It faced two shareholder resolutions at its 2022 annual meeting.

The first would have seen TD adopt a policy preventing it from financing new fossil fuel supply, including companies exploring or developing untapped reserves, by the end of 2022. TD encouraged shareholders to vote against the motion and misrepresented key facts in its explanation.

TD told shareholders the “need to continue to invest in the responsible production of fossil fuels during the transition period in order to facilitate a just and orderly transition has been acknowledged by policymakers such as the European Commission and by expert bodies such as the International Energy Agency (IEA), including its Net Zero Emissions by 2050 (NZE) report, which is the basis currently being used by TD and some other major banks as a benchmark for determining their own 2030 emission reduction targets.”

However, the IEA report the bank referenced actually says: “Beyond projects already committed [to] as of 2021, there are no new oil and gas fields approved for development in our pathway, and no new coal mines or mine extensions are required.” The report concedes there is room for investments in existing oil and gas projects related to maintenance and other issues but makes clear there is no need for investments in new fossil fuel projects, which is what the shareholder resolution would have stopped.

Facts aside, TD got its way.

“We filed this proposal because the shareholders we represent saw TD’s plans to address climate change and it did not align with IEA’s roadmap to get to net-zero by 2050. We quoted IEA in our supporting statement thinking TD just didn’t see or didn’t agree with IEA’s approach,” Angus Wong, a senior campaign manager with shareholder advocacy group SumOfUs, said in a statement. “So we were shocked when TD’s board of directors quoted the IEA in its recommendation for shareholders to vote against our proposal. With this climate disinformation, it's no wonder our proposal didn’t pass.”

The second shareholder resolution would have the bank adopt an annual advisory voting policy about its environmental policies and climate action plan. TD told shareholders to vote against the resolution with the rationale that “the board believes that it would not be possible, as a practical matter, to provide shareholders with sufficient information to enable them to make an informed decision on an advisory resolution as suggested in the proposal.”

The Bank of Montreal is ranked fourth among Canada’s Big 5 for its fossil fuel financing, having provided over $150 billion to coal, oil or gas companies since 2016. At the same time, among Canada’s largest banks, BMO is sometimes considered to be the front-runner on climate because it's the only bank so far to set an absolute emissions reduction target for 2030 — not just weaker “intensity”-based targets that can still allow total emissions to rise. BMO faced two shareholder resolutions related to climate this year.

Like other banks, one proposal, if passed, would have seen the bank adopt an advisory vote policy to help guide its climate performance. BMO urged shareholders to reject the resolution on the grounds the board of directors’ responsibility to oversee climate risks “cannot be delegated to shareholders.”

A second proposal would have seen BMO adopt a policy preventing it from financing new fossil fuel supply by the end of 2022 to be consistent with the IEA’s Net-Zero by 2050 report, which found there is no need for any new fossil fuel development if the goal is to limit global warming to as close to 1.5 C as possible.

BMO told shareholders to reject the resolution, claiming that prohibiting fossil fuel financing “would be inconsistent with an orderly transition to net-zero.” Moreover, BMO points to the Canadian government’s net-zero by 2050 goal and says “no current policy plans suggest a phase out of oil and gas production in Canada will occur to achieve these objectives” as part of the rationale to vote against the proposal.

Since the Paris Agreement was signed, the ​​Canadian Imperial Bank of Commerce has provided $117 billion to fossil fuel companies. At its 2022 annual meeting, it faced only one shareholder resolution related to climate.

The sole resolution filed by shareholder advocacy group MÉDAC would have required CIBC to establish an advisory vote on its environmental policy. CIBC told shareholders to vote against the proposal because its climate strategy is “inextricably tied” to its overall corporate strategy.

This is so depressing. So

This is so depressing. So stupid.

From the information in this

From the information in this article and a few others over the years, one would think the banks run Canada? Please, someone, prove me wrong.

Money IS the root.

Money IS the root.

So what financial/banking solutions ARE not investing in fossil fuels?
If we want to move our money out of these banks, what are the alternatives?