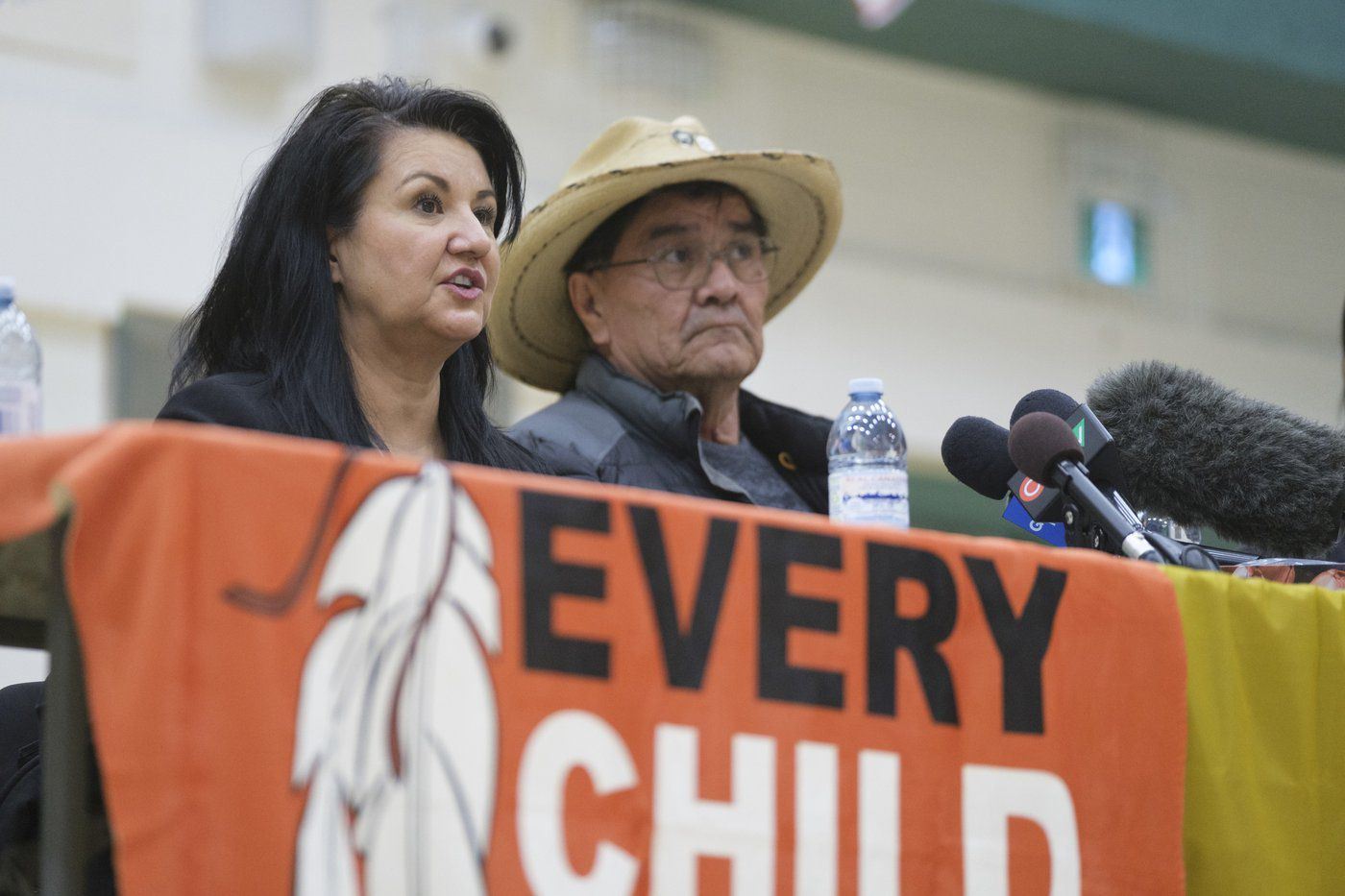 Sarah Longman and Eddie Bitternose, from left to right, speak to media during a public announcement at the George Gordon Education Centre at George Gordon First Nation on April 20, 2022. Photo by The Canadian Press/Michael Bell
Previous story

Chief Byron Bitternose of George Gordon First Nation says members of his community had hoped they would never discover graves near the site of a former residential school.

"It's a sad day for us, but I think we had to get here and this is just the beginning," Bitternose said. "It is my hope that one day we will be able to tell our children the whole story."

The school, near the Village of Punnichy, was first established by the Anglican Church of Canada in 1888 and operated until 1996, making it one of the longest-running residential schools in the country.

An estimated 150,000 Indigenous children were forced to attend residential schools in Canada. Several First Nations have announced over the last year that hundreds of unmarked graves have been detected at some former school sites.

The National Centre for Truth and Reconciliation has a record of 49 student deaths at the George Gordon school. Its final report called the school one of the worst run in the entire residential school system.

Eddie Bitternose attended the school in 1958 when he was 10-years old.

He said hearing about the findings has been difficult, but not as hard as relaying the information to the community and feeling betrayed by the Anglican Church, which he said still has close connections to the area.

"It was disappointing, having faith in the Anglican sect ... we thought they were more respectful of Touchwood Indians because we accepted their Jesus or God," he said.

Sarah Longman, a member of the First Nation and head of its residential school cemetery committee, said the first phase of the search is just the beginning.

"This is going to be a 10-year journey for the First Nation, and we just completed the first sixth months," she said. "We're dealing with 100-plus years of history of the residential school here in George Gordon, so there's a lot of work and a lot of area to cover.

"I don't know if we'll ever get to the space of where we're going to be able to identify (bodies)," she said.

Although there is a cemetery near the former school, Longwood said they are intentionally searching that area last. The locations for the first search were directed by the stories of survivors.

"A lot of times we don't hear the voice of the survivor, we don't validate the information they share with us, and we thought it was really important we took that voice and honoured it by going to the areas they suggested we go to first," Longwood said.

The investigation is also complex because students of the school came from across Canada, added Eddie Bitternose.

It says the school had a long history of poor management, sexual abuse of students and complaints that discipline was harsh and abusive, causing many students to run away.

In 1941, 11-year-old Andrew Gordon froze to death after running away from the school.

The report says two other girls died by drowning in 1947. In 1968, a fire claimed the lives of four students.

There are also records of a supervisor impregnating a student, and one child was diagnosed with a venereal disease after being sexually abused.

The Truth and Reconciliation Commission has a record of six staff members who were convicted of crimes against students.

William Peniston Starr, the school’s director from 1968 to 1984, was convicted of ten counts of sexual assault. He was sentenced to 4-1/2 years in prison.

In 1998, now-retired Saskatchewan justice Ronald Barclay noted that more than 400 lawsuits had been filed related to abuse at the George Gordon school, many of which involved Starr.