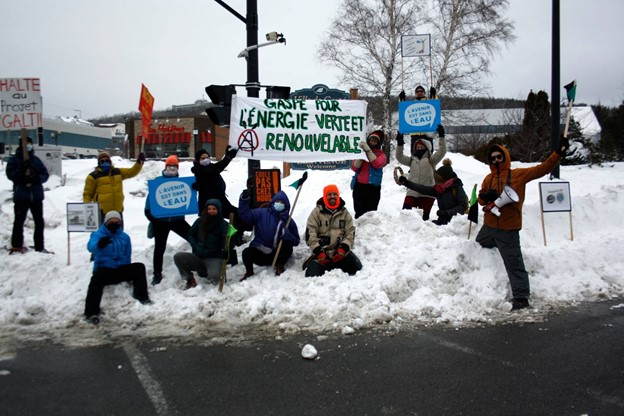 Citizens protest in Gaspé, Que.. in 2021 during Utica Resources' court case against the Québec government for the right to drill. Photo courtesy of Pascal Bergeron
Previous story
Next story

Quebec became the first jurisdiction in the world Tuesday to explicitly ban oil and gas development in its territory after decades of campaigning by environmental organizations and citizen groups.

“Citizens rallied, citizens regrouped and actually won this fight because it was in their backyards … it would have had major impacts on their way of living on the territory,” Émile Boisseau-Bouvier, Équiterre’s climate policy analyst, told Canada’s National Observer.

The newly adopted law will end petroleum exploration and production as well as the public financing of those activities in Quebec. It passed only one week after the federal government approved a new oil project off the coast of Newfoundland and Labrador despite a recent report from the Intergovernmental Panel on Climate Change (IPCC) that found there is no place for new fossil fuel infrastructure in a climate-safe future.

For a jurisdiction within Canada — which is among the top five oil producers worldwide — to forgo the industry as part of its current and future economy immediately after the federal government indicated it will continue to pursue fossil fuel expansion “sends a really powerful signal,” said Caroline Brouillette, national policy manager for Climate Action Network Canada.

Last year, Quebec joined the Beyond Oil and Gas Alliance, a group of countries, provinces and states committed to ending new fossil fuel exploration. Membership also means jurisdictions must take action to phase out oil and gas by taking steps like ending fossil fuel subsidies. It is the first member of the alliance to pass legislation ending oil and gas exploration and production.

For two decades, citizens have mobilized against different oil and gas projects in Quebec, including shale gas in the St. Lawrence Valley and oil projects in Gaspésie. Without citizens’ long-standing resistance to these projects and more, it would not have been possible to adopt this bill, said Boisseau-Bouvier.

Pascal Bergeron, a citizen organizer and spokesperson for Environnement Vert Plus, first became involved in opposing oil and gas development in Quebec in 2016 when he participated in a 42-day walk around the Gaspé Peninsula to inform people about the risks of oil and gas exploration and development in the area. From there, he helped organize protests and marches, pressured the government on abandoned oil and gas wells and industry subsidies, and organized support camps and civil disobedience training for occupation protests.

Although Quebec’s economy is not held captive by the oil and gas industry like Alberta’s, for example, it still wasn’t easy to secure this victory, Bergeron said.

One week after the federal government approved the controversial Bay du Nord offshore oil project, Quebec has adopted legislation to ban oil and gas exploration and production in the province. #cdnpoli #BeyondOilandGasAlliance

“There needed to be political pressure from an activist movement that made the government fear that they would lose something if they approved the next drilling,” he said. “We wanted to avoid this crash that always happens when an extractive industry ends … that's very important for people to understand that always going forward with this oil and gas exploitation, they're gonna hit the wall.

“At some point, it's going to be impossible to go further, so (we) might as well look that in the eye and act now.”

“The Bloc understands the challenges ahead for a province whose economy is captive of oil and gas infrastructure. However, continuing to put forward expansion projects and subsidizing this industry is the same as turning a blind eye to the perils to come.”

To her, the adoption of Bill 21 shows “we can change things if we work hard enough.”

Dupuis’ activism began in 2014 when she moved to the countryside near the St. Lawrence River, looking forward to retiring in a tiny beautiful village called Saint-Antoine-de-Tilly. But upon arriving, Dupuis realized a pipeline was going to be built just across the river and people were largely unaware, so she and her sister created a citizens group in the village to highlight the issue. She has since worked at the provincial level and with multiple organizations.

She says people before her started this work as early as 2008, and the social movement has continued to grow with each citizen’s contribution.

“(Government and companies) could do nothing without us being in their way all the time,” said Dupuis.

She said a big part of the fight was showing governments at both the provincial and municipal levels that people did not want drilling to occur so “they could not pretend that there was social licence for (projects).”

The new legislation is a major win with one drawback, environmentalists say.

The province is providing permit-holding oil and gas companies with a total of $100 million, one-third of which will largely cover the cost of closing and restoring wells and the rest of which aims to cover expenses the companies have incurred since 2015.

Although this violates the polluter pays principle, the companies requested $500 million to cover these costs. Despite this downfall of the legislation, Boisseau-Bouvier says it is still a major win.

“This is a step in the right direction, but we cannot stop there,” he said. “Quebec is still far from meeting its (greenhouse gas) reduction targets. They will have to do way more than just not produce oil and gas — we'll have to actually reduce our (greenhouse gas) emissions … by reducing our oil and gas consumption.”

There is rhetoric that Quebec’s decision to ban oil and gas exploration and production is insignificant because the province isn’t an oil and gas powerhouse like Alberta or Newfoundland and Labrador, Brouillette said.

But while provincial and territorial economies are very different, it isn’t fair to say the opportunity cost of Quebec’s decision is zero, she added.

“It makes sense for first-movers to be jurisdictions where the opportunity cost of such a decision is the lowest,” said Brouillette. “Some people are under the impression Quebec has absolutely no oil and gas resources it is renouncing … that's not the case at all.”

In early February, Le Devoir reported the president of the Quebec Energy Association, Éric Tetrault, said shale gas from the St. Lawrence Valley could represent “lost profits” of $3 billion to $5 billion. Then, on April 12, Tetrault told Le Devoir the oil reserves in the Quebec subsoil were in a financial range of $45 billion to $200 billion.

“In Quebec, the reason there's not a lot of fossil extraction activity is because of political decisions that were made because of citizen mobilization,” said Brouillette.

Brouillette and Boisseau-Bouvier agree Quebec’s move is important to push other jurisdictions in Canada and around the world to act quickly to shift away from fossil fuels.

“We decided, collectively, that we don't want to tap into our oil and gas potential, we want to actually move forward and develop greater economies in a way that is more linked to what science tells us and what we should do to limit the worst impacts of climate change in our life,” said Boisseau-Bouvier.

Though Quebec will continue to be an object of ridicule in Alberta as standard fare, it will win lots of well-deserved praise for their stance by many other Canadians.