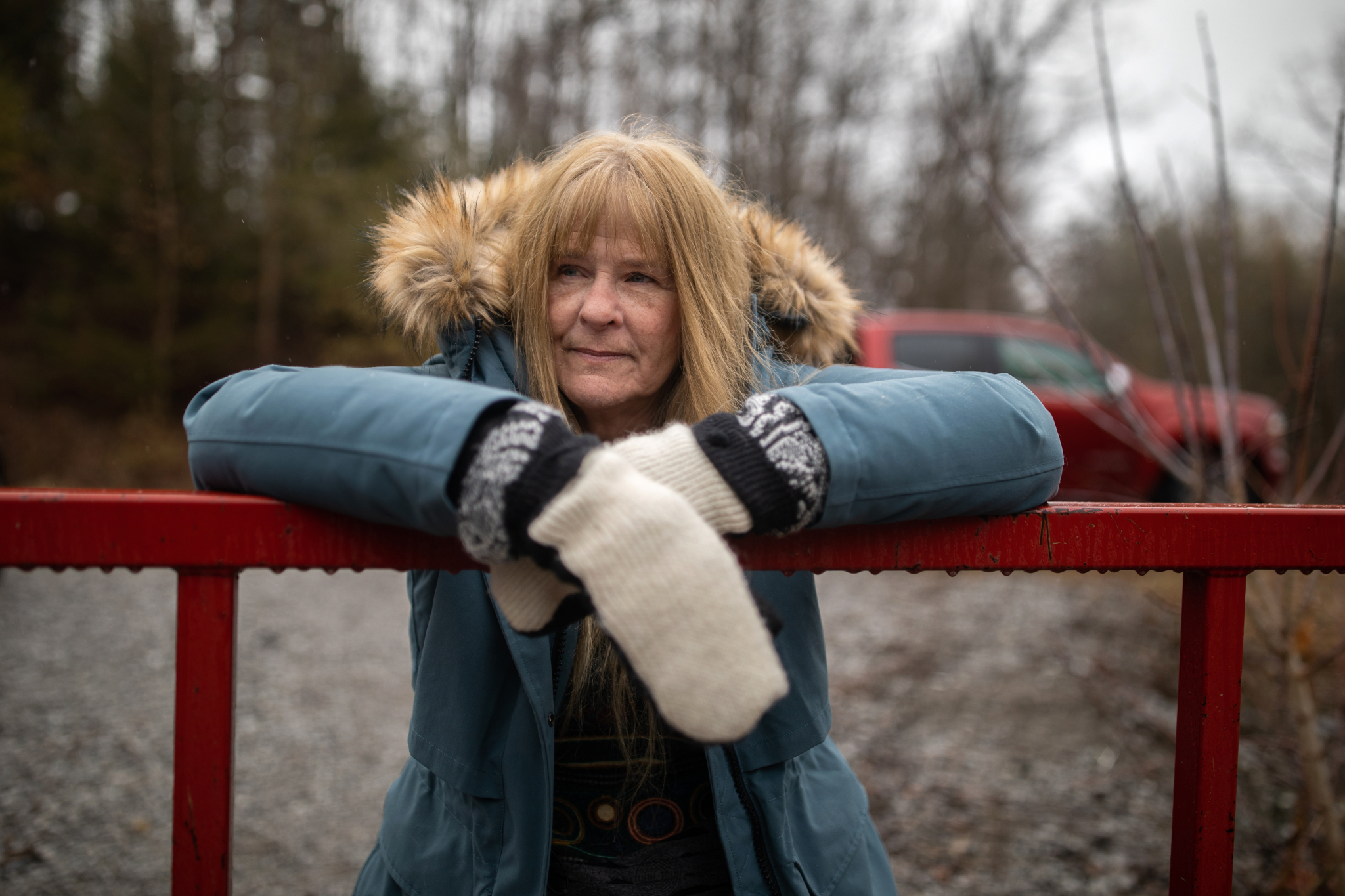 Paula Jongerden lives near an abandoned oil well that spews effluent and poison gas. She worries about the health of her family and the environment and wants the province to deal with the problem. Photo by Nick Iwanyshyn/National Observer
Previous story

“Come for a coffee, we’ll have it inside,” Norfolk County resident Paula Jongerden says with a laugh. But she’s not joking. She lives about 300 metres from an old oil well that routinely belches foul-smelling odours that ensconce her home with the stench of rotten eggs.

Jongerden crosses her fingers when inviting people over for barbecues, hoping the wind won’t blow toward her property. Locals refer to the area on Forestry Farm Road, about 90 kilometres southeast of London, Ont., as “the stink.”

But it’s not just the smell. It’s what the smell signals: the presence of hydrogen sulphide, a gas that, in low concentrations, stinks. At higher concentrations, it’s deadly. A monitoring station at the site has measured dangerous levels, high enough to cause significant respiratory and eye irritation, and pulmonary edema. Signage surrounding the old well, which lies on county property, warns of poison gas. Jongerden has been cautioned by provincial authorities not to get too close.

“I will caution you, please do not enter into that area as the levels of [hydrogen sulphide] are extremely high and the fire department has measured life-threatening levels while they were fully protected in supplied air,” an Environment Ministry official emailed her after she submitted photos of sulphur water bubbling out of the ground. “Depending on wind conditions, the area you took photos could be very dangerous.”

She worries about the effects on her health and that of her family — she doesn’t feel safe on her own property anymore. She worries, too, about the environment. The well is surrounded by an ever-growing expanse of dead foliage; effluent spews out of it into Big Creek, which in turn flows into Lake Erie, the drinking water source for about 11 million people.

Relics of a bygone era

There are an estimated 27,000 oil and gas wells in southwestern Ontario. Most are inactive, a remnant of the time more than a century ago when the province was a major player in oil and gas production. Now, they are long-abandoned relics of a bygone era — and in some instances, hazards to human health and safety and the environment. An explosion that injured 20 people and flattened several buildings in Wheatley, about 200 kilometres to the southwest, last August is believed to have been caused by a long-forgotten well underneath the town.

The Ontario Petroleum Institute (OPI), which represents the province’s oil and gas industry, posits that as many as 4,400 of the wells “pose a risk to landowners and public health and safety” and that there could be “several thousand” more that no one knows about.

Leaks from old wells plugged long ago using rudimentary methods are a problem all over southwestern Ontario. But it is particularly acute in Norfolk County, where there are 2,637 wells, about 80 per cent of which are abandoned or suspended.

Maurice Dusseault, a professor of engineering geology at the University of Waterloo who has studied the area, said boreholes penetrate a large artesian aquifer, a body of underground water under pressure. That pressure pushes water and methane to the surface through available pathways, like old wells.

“Many of these wells are in a condition where they are no longer protective of public health and safety, and more wells are likely to enter this condition in the future,” notes the executive summary of a confidential report obtained by Canada’s National Observer that was authored by Dusseault and prominent hydrogeologist Richard Jackson.

Most of the wells are on what is now private property. The provincial Oil, Gas and Salt Resources Act stipulates that should the well operator no longer be around — as is the case for most of Ontario’s abandoned wells, given their age — the individual landowner is responsible for cleaning up and plugging wells.

The trouble at the well near Jongerden’s place started in 2015.

But trouble in the area began nearly 50 years ago when a well operator plugged a borehole that was leaching into Big Creek. As a result, other abandoned wells in the area began to bubble up, so the province drilled a so-called relief well in September 1968 to relieve pressure in the aquifer.

In 2013, the relief well began to leak. The provincial Ministry of Natural Resources plugged it in March 2015, despite warnings that doing so could cause problems elsewhere. According to experts, municipal officials and local landowners, it did.

That April, at least four other wells in the area began to discharge sulphur water. More soon followed. In some instances, high levels of hydrogen sulphide led to evacuations for local residents.

On Forestry Farm Road, the old well erupted into a bubbling “cauldron” of toxic water.

“It’s like our own Chernobyl right here in Norfolk County,” says Mayor Kristal Chopp. She wants the province to recognize its role in causing the problem and take responsibility for devising and funding a solution, as well as study the long-term health effects of chronic exposure to hydrogen sulphide.

“The province has collected millions in royalties off of these gas wells over the years and yet has effectively washed their hands of the problem and won’t accept responsibility,” says Chopp. “Their actions were the direct cause of the subsequent eruptions that took place.”

Municipalities aren’t equipped with the expertise or funds to deal with the leaking wells, she says.

“It’s not a matter of, we just go in and we plug that well, we’re likely to cause further problems. Our hands are tied, nobody knows what to do. And we don’t have the expertise. It’s under their jurisdiction to deal with this.”

A game of ‘Whack-A-Mole’

Natural Resources Ministry spokesperson Anita Tamrazi said in an emailed response to questions that the ministry “recognizes the need to address safety issues associated with subsurface gas and legacy wells.”

The provincial Abandoned Works Program provides funding to deal with the highest priority wells and has spent $23 million to plug 380 wells since its inception in 2005. “However, the landowner is ultimately responsible for the well,” Tamrazi wrote. “This includes responsibilities for all aspects of compliance such as repair of leaks, maintenance and plugging.”

But in Jackson and Dusseault’s report, the experts conclude that plugging the relief well in 2015 likely caused other wells to erupt. “This process is analogous to the Whack-a-Mole game played at fairgrounds,” they wrote. To remedy the problem, pressure in the aquifer must be relieved and the discharge treated, the report says.

Methane bubbles up from an abandoned well in Ontario. Video supplied by Lloyd Edwards

When Tom Edwards’ mother passed away, he used the money he’d inherited to buy a farm.

He grew up on a large acreage near Brantford and liked the idea of having a farm in the family. It was a way to help out his 26-year-old nephew who had also inherited some money. They went in together on a 50-acre property on Silver Hill Side Road, around the corner from Jongerden’s place that’s part field, part woods, cut through by a creek.

They took possession in May 2020. Edwards knew there was an old well there, but he says he didn’t know he’d be on the hook for dealing with it. And he doesn’t think he should have to — he blames the province for creating the problem in the first place.

The well on Edwards’ property began to leach into the creek in 2017 after the province sealed some boreholes that had begun leaking following the plugging of the relief well two years earlier. The province had warned the previous owner they had to deal with it, to no avail.

Edwards and his nephew received their first letter from the province in February 2021 requiring them to fix the well by the end of May. Edwards says he tried to find a contractor and get guidance on what to do but wasn’t successful. Costs to seal old wells are prohibitive and vary widely, anywhere from $60,000 to well over $1 million, and Ontario doesn’t have the level of expertise of oil-producing provinces to the west.

Last spring, the ground around the well collapsed, creating a sinkhole more than a dozen metres long that pukes sulphur water, as the back-and-forth between Edwards and the province has dragged on, with escalating threats of legal action.

“The ministry is pressuring me and dragging me toward court. They can put a lien on my property, which is basically useless now anyway because of this,” says Edwards.

Edwards is concerned that if he were to plug the well, it could cause eruptions elsewhere that he could be liable for. “How can we be held responsible or liable for previous decisions made by the [ministry] creating an ecological problem or [the] failure of the [Ministry of Environment, Conservation and Parks] to enforce a corrective action on the previous owner?” he wrote in a recent email to an inspector with the Ministry of Natural Resources.

Like Edwards, Jongerden wants the province to acknowledge the concerns of residents — she says complaints are often dismissed, treated as a nuisance or responded to in a patronizing way. And she wants it fixed.

“Just take responsibility for it.”

I've forgotten over time, but

I've forgotten over time, but wasn't there at some point government regulation that required people and companies engaging in wells and other initiatives that could be dangerous over time, to set up something like a trust fund, which could be used when the well or whatever stopped working?

Funds could NOT be touched by the person or company while the initiative was still operative. Could ONLY be used to restore the environmental health of the area.

Did I dream this?

Why are we all, in any province throughout the country, still on the hook to clean up after long-gone gas stations, tar sands, mines, and wells like these?

Or is that a silly question.

I think we all would like to know what is happening on the issue of cleanup of gas, oil, tar sands, etc. Governments speak with forked tongues - no matter federal or provincial. They talk a big game at the front end of elections but when it comes to doing the job or passing legislation, no one seems to want to back off from the corporate hands in their pockets. Seems to me that corporations actually run the planet now - no one seems to have the energy or money to want to do anything other than obey the capitalist money lords. I truly wish I was wrong on this and would love some feedback.