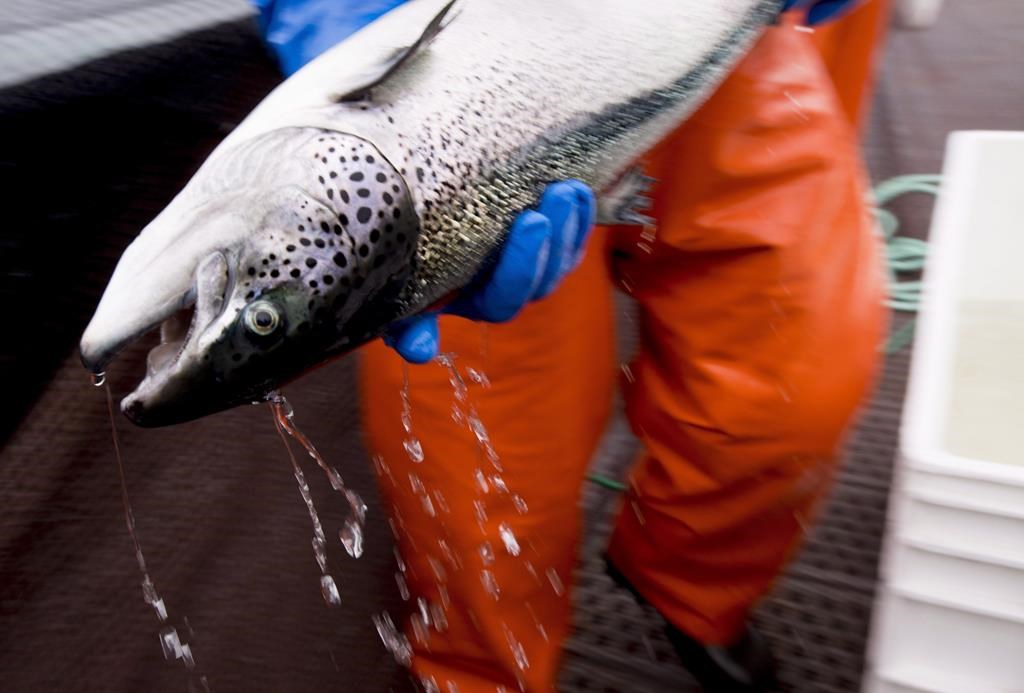 An Atlantic salmon is seen during a Department of Fisheries and Oceans fish health audit near Campbell River, B.C. Wednesday, Oct. 31, 2018. Photo by: The Canadian Press/Jonathan Hayward
Previous story

VANCOUVER — A Federal Court judge has set aside a Department of Fisheries order that would have phased out fish farming in British Columbia's Discovery Islands.

Federal Court Judge Elizabeth Heneghan says in a decision issued April 22 that the order made in late 2020 by then-fisheries minister Bernadette Jordan breached the right to procedural fairness owed to the 19 fish farms that were expected to shut down by the end of June.

Fish farm operators Mowi Canada West, Cermaq Canada and Grieg Seafood applied for a judicial review of the order that prevented them from restocking their farms, arguing it lacked reasons and didn't "show an appreciation of the facts."

Heneghan agreed with the applicants that when a decision maker departs from a recommended course of action, reasons are required.

Heneghan's ruling supports the fish farm operators' request for judicial review, upholds the injunction that permits restocking of Discovery Island fish farms and sets aside the decision of the minister while a ruling on costs will follow.

The BC Salmon Farmers Association said it was encouraged by the decision, however it declined an interview request while it is reviewed the ruling more closely.

"This is a positive development for the coastal Indigenous and non-Indigenous communities in which we operate, and the thousands of family-supporting jobs our sector sustains," the association says in a statement.

The Fisheries Department and Minister Joyce Murray did not respond to a request for comment.

Heneghan's decision also says submissions of interveners, including the David Suzuki Foundation and Georgia Strait Alliance, focused on issues including constitutional protection of First Nations’ rights and respect for the precautionary principle but didn't address questions such as the lack of procedural fairness.

Mowi argued last year that it would suffer losses of about $26 million, would have to lay off at least 78 people and cancel local contracts if it was forced to cull 1.18 million salmon smolts instead of transferring them to the Discovery Island farms.

Fish farming has been a contentious practice on the B.C. coast, where some have raised concern about potential impacts on wild stocks.

The Cohen commission on the decline of Fraser River sockeye in 2012 described the Discovery Islands as a bottleneck along wild salmon migration routes.

However, one of the commission's key recommendations to eliminate fish farms along that route was contingent on Fisheries and Oceans finding more than a minimal risk to migrating stocks by September 2020. That condition was not met.

Instead, by September 2020, nine reports by the Canadian Science Advisory Secretariat concluded that fish farming in the Discovery Islands posed no more than a minimal risk to wild stocks, the Federal Court decision says.

Bob Chamberlin, who chairs the First Nations Wild Salmon Alliance, said the industry's participation in the preparation of those reports, which is also noted in the court decision, raises questions for him about their independence.

The overall impact of the court decision will depend on what the minister does next, he said.

"Of course we were hoping for a different outcome," Chamberlin said in an interview.

"What troubles me from a First Nations perspective is it didn't seem to me that much weight was given at all in terms of the expression of Aboriginal rights and how it was accommodated."

The alliance has said 102 First Nations have pledged support for a transition to land-based closed containment fishing.

Jay Ritchlin, director general of Western Canada for the David Suzuki Foundation, said he considered the decision to be a procedural ruling rather than a "death knell" for the federal plan to phase out fish farms.

"They just need to formulate the rationale with enough time and enough detail so that it's not considered unfair, I think, is essentially what this decision tells us," Ritchlin said.

Last month, Premier John Horgan wrote a letter to Prime Minister Justin Trudeau saying any plans to move away from open-net pen salmon farms should come with a transition plan for the industry and workers because hundreds of jobs and the economies of dozens of communities were at risk.