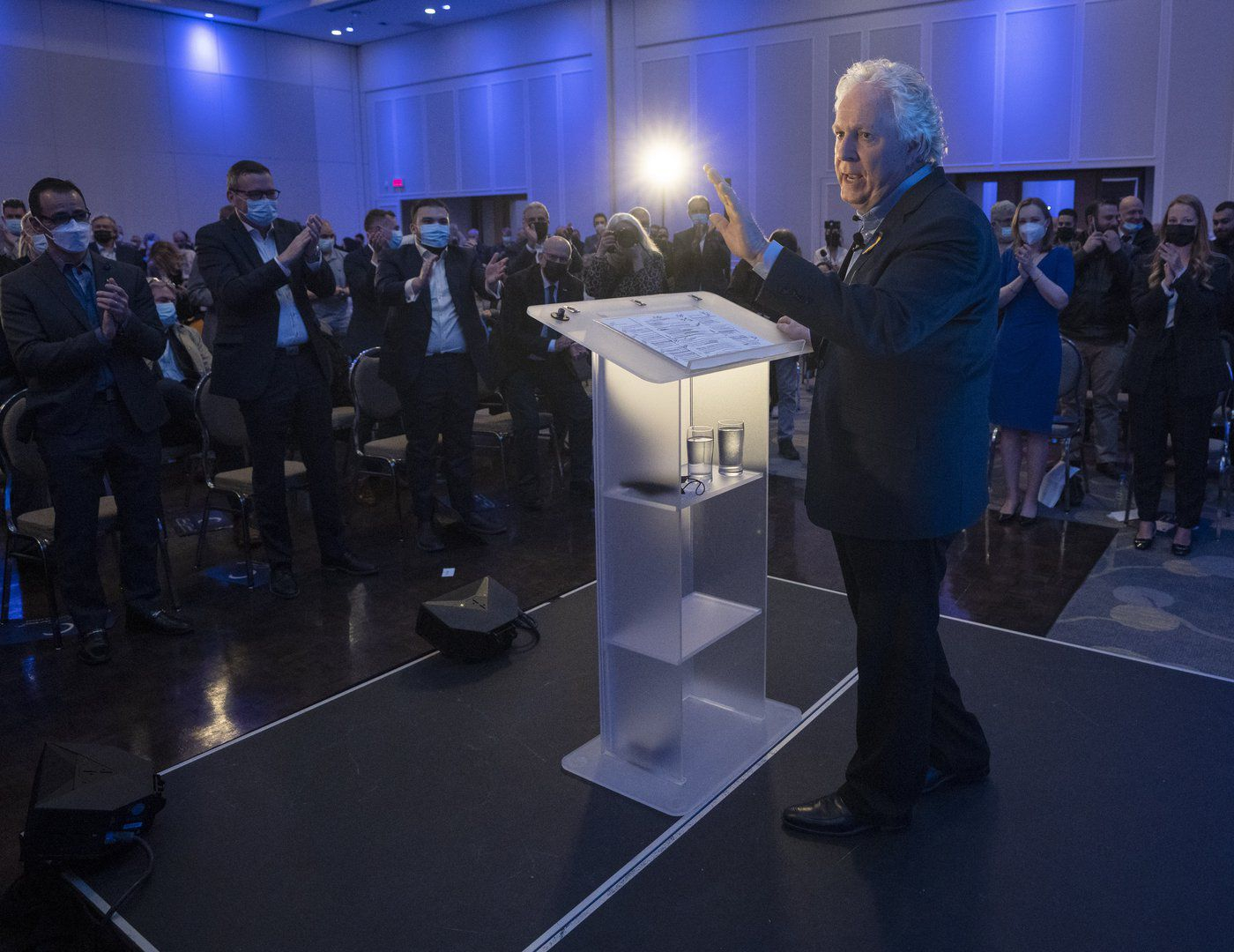 Jean Charest speaks to supporters at a campaign launch event in Laval, Que., on Mar. 24, 2022. Charest is promising to repeal the federal Liberal's consumer carbon price and eliminate HST on low-carbon purchases. Photo by The Canadian Press/Ryan Remiorz
Previous story
Next story

Conservative leadership candidate Jean Charest is promising to repeal the Liberal government's consumer carbon price and eliminate the federal portion of the HST on low-carbon purchases.

He also pledges to stick with an older target for reducing the country's greenhouse-gas emissions by 2030 should he win the Sept. 10 leadership election — and return the Conservatives to power.

The plan shared with The Canadian Press is high level in nature and contains no details about how much it would cost.

It promises to eliminate the "Trudeau consumer carbon tax," which is what it calls the current federal price on carbon.

“There is a price on carbon, and we’re choosing to go the route of the large emitters," Charest, a former Quebec premier, said in an interview Monday.

"That’s the approach that I feel is going to be the most efficient."

The federal carbon levy, now set at $50 per tonne of emissions, applies directly in Alberta, Saskatchewan, Manitoba and Ontario, where consumers receive rebate cheques from the federal government in those provinces.

All other provinces have their own carbon-pricing systems that meet federal minimum standards.

Charest said he would respect the jurisdiction of the provinces to decide how best to reduce their emissions, noting the differences between Quebec, for example, which has a lot of hydroelectric power, and Alberta, where the economy is linked to oil and gas.

“It just makes sense that we be able to account for different approaches, given different realities," he said.

Charest said he would not honour the target Prime Minister Justin Trudeau committed the country to as part of a United Nations climate agreement, which would slash greenhouse gas-related emissions by 40 to 45 per cent below 2005 levels by 2030.

Instead, Charest says he would stick with the goal of 30 per cent, decided by former Conservative prime minister Stephen Harper, which he called more achievable and realistic.

“We’ve seen this movie, I don’t know how many times, of setting up objectives and failing.”

How far Conservatives are willing to go to tackle the issue of carbon-related emissions, which are fuelling the planet's warming, is a question the party faces as scientists warn of a need for swifter action. The governing Liberals have also made climate change one of their top priorities.

One of the most popular rallying cries of the Conservative faithful, many of whom hail from Saskatchewan and Alberta, is to cancel the carbon tax. They say it is an ineffective and punishing measure for families.

Fellow Conservative leadership candidate Pierre Poilievre has already promised to do this. He earlier attacked Charest for his support of carbon pricing, and suggested Charest, who did not put out his climate plan until now, favoured the measures imposed by Trudeau.

When Charest was premier of Quebec, he introduced a cap-and-trade system, which is a form of carbon pricing. He was also federal environment minister under former Progressive Conservative prime minister Brian Mulroney.

Many party members and policy experts have been watching to see what he would promise on the climate file.

To incentivize Canadians to reduce their own carbon footprints, Charest's plan pitches eliminating the federal part of the HST on purchases such as electric vehicles, Energy Star appliances and high-efficiency windows.

His campaign said it would be up to provinces whether they decide to slash their own portions of the HST.

His is also pledging to roll out tax credits for carbon capture and storage technology and for carbon dioxide removal facilities.

Carbon capture and storage involves trapping emissions from industry and storing them underground so that they are not released into the atmosphere, where they contribute to global warming.

The Liberal government allocated $2.6 billion over five years to a tax credit for companies that invest in projects that use the technology.

Charest's plan also promises to roll nuclear energy into the new federal green bonds program as part of a push for more green technologies, which it says Canada should export.

Applying carbon border tariffs and fast-tracking approvals for projects that reduce emissions are also features in his blueprint.

Stewart Elgie, director of the Environment Institute at the University of Ottawa, who was shown Charest's plan to provide feedback, said he feels it's credible. He added Charest's track record in government also makes him the most serious climate-minded contender in the race.

Elgie said he liked the proposal to cut the HST off low-carbon products, which he thinks will help consumers.

"I liked that he'll put a carbon price on industry emissions. It would be better if that price applied to all emissions," he said.

"The main weakness in the plan is that there won't be a carbon price on consumers … so you'll have to use other tools to achieve those emission reductions."

Former party leader Erin O'Toole found himself in hot water with his caucus and wider party membership last year after he surprised them by embracing a carbon levy for consumer goods, such as fuel, after campaigning as a leadership candidate to scrap the Liberals' carbon price.

Michael Bernstein, the executive director of Clean Prosperity, a non-profit that advocates for Conservatives to embrace carbon pricing as the most cost-effective way to slash emissions, said Monday that he's "not overly surprised" to see one for consumers excluded.

Bernstein said it's clear that opposition to the policy has become a core part of the Conservative identity for many party members, which extends beyond the "facts and figures" of what it actually does.