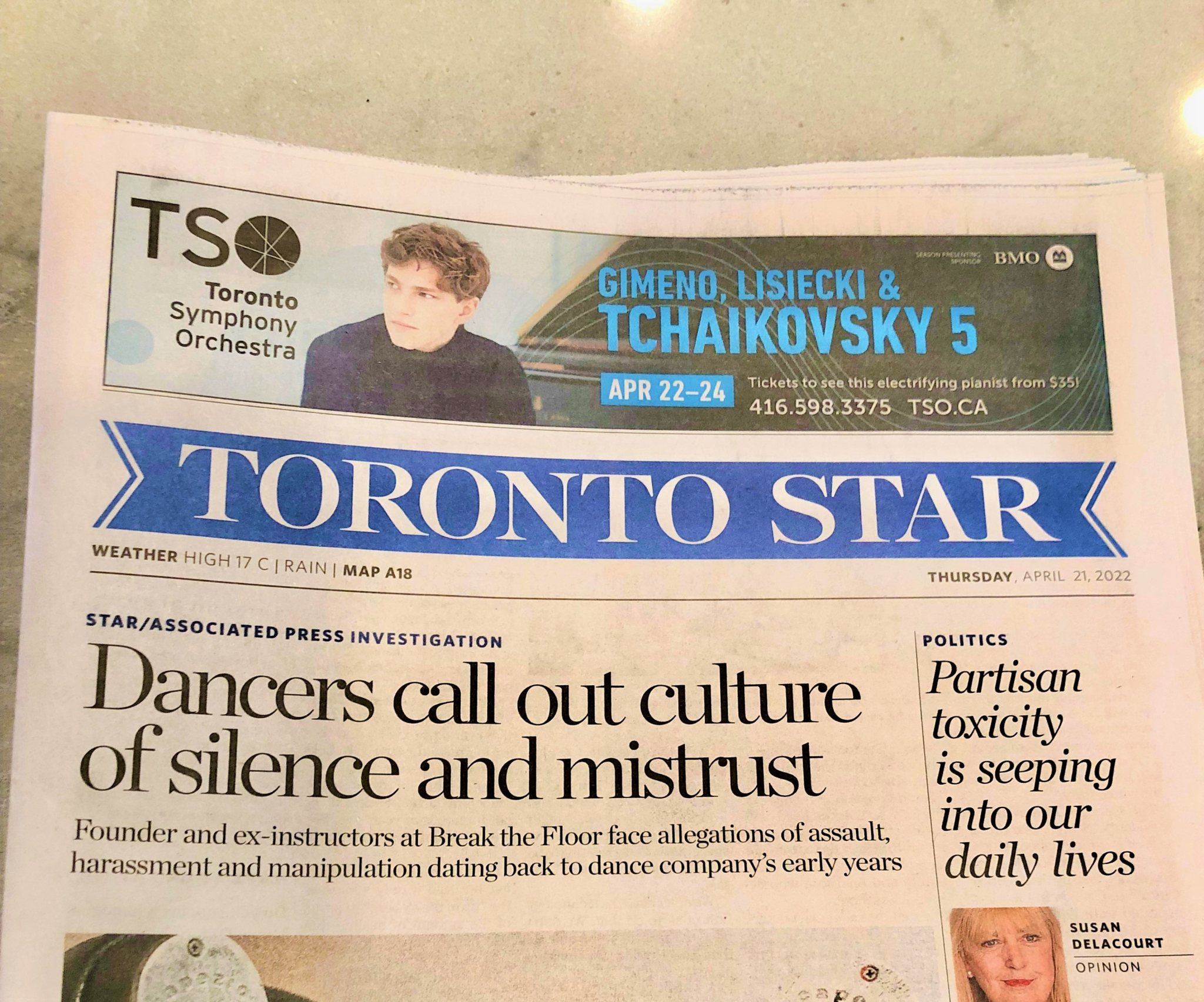 When the Toronto Star was sold to a pair of conservative-leaning businessmen in May 2020, they promised to uphold the newspaper's long-standing commitment to progressive values. Now, with the hiring of a new CEO whose views about the pandemic and public health policy have come under scrutiny that promise may be put to the test.

With stints as an executive at CanadaHelps, Kobo, and Lavalife, Marina Glogovac’s resume looks good enough on paper for the job. But a series of recent tweets (now deleted), which include opposition to the province’s vaccine passports and a reference to the now-debunked “mass formation psychosis” conspiracy theory that gained traction after an episode of the Joe Rogan Experience podcast, point to someone whose values may not be aligned with those of the paper’s readership. “Vaccinated + had Covid,” she tweeted, “but I will not step into any establishment that requires passports, on principle. Did the living in a Communist country thing, thank you.” Stranger still were her comments about Pfizer, which she described as a “massive corrupt drone corporation” that had “captured” the Ontario government.

These tweets are bad since they speak to her inability to sort fact from fiction on a crucial issue of public importance. The decision she made to delete them without disclosing why might actually be worse, given she’s now charged with leading a company in the business of fighting disinformation, not spreading it. But it’s the likes on her Twitter profile that she didn’t delete that tell the real tale, given that they’re marbled with anti-establishment, pro-convoy sentiments and include support for anti-vaccine personalities like Theo Fleury and Novak Djokovic.

It’s hard to square these beliefs with the Toronto Star’s reputation as a progressive paper, one that’s underwritten by its so-called “Atkinson Principles.” Yes, those principles include individual and civil liberties, but asking people to wear masks and get vaccinated does not constitute a breach of those — as any number of failed attempts to bring charter cases forward has made clear.

Then again, maybe the Star’s reputation has failed to keep pace with its new reality. As Canadaland’s Jonathan Goldsbie documented in a 2020 piece, the Star’s new owners, Jordan Bitove and Paul Rivett, are cut from a different cloth than their predecessors. “Rivett’s recent contributions include the maximum allowable amount to each of three contestants in the Ontario PC Party’s 2018 leadership race, including Doug Ford, as well as the maximum amount to Maxime Bernier for his 2017 bid for leadership of the federal Conservatives. While Bitove has supported the Liberals on a couple occasions, he made the maximum donation to Erin O’Toole’s Conservative leadership campaign just three months ago.”

Ironically, Bitove and Rivett funded their purchase of Torstar with loans from Canso Investment Counsel, the very same fund manager that owns most of Postmedia’s debt. That could end up being more than just a coincidence. As the Globe and Mail’s Jeffrey Jones and Andrew Willis noted in a May 2020 piece, “There is a business case for combining Torstar with a rival such as Postmedia, which would include using technology more efficiently along with reducing expenses.”

Maybe that’s what Torstar brought Glogovac in to explore as their new CEO. Bitove and Rivett were certainly familiar with her work, given that she sits on the board of VerticalScope, a tech company that they acquired as part of the Torstar deal. VerticalScope, by the way, went public last year at a price that made Torstar’s stake worth more than three times what Bitove and Rivett paid for the entire company.

The Toronto Star’s future, and Glogovac’s role in it, remain unclear. Maybe, as The Line co-founder Jen Gerson said in a recent podcast, this is all much ado about nothing. “[Her] statements and tweets might not go over particularly well in a very, very progressive, liberal, downtown Toronto space. That does not disqualify her from being the CEO of Torstar.”

Then again, maybe being able to sort fact from fiction and avoid trading in glorified conspiracy theories about a global pandemic should be table stakes for anyone who wants to lead a major media company in 2022. When former Torstar chair John Honderich announced the sale of the company, he said that “the time has come to pass the torch.” Now, less than two years later, it might be time to wonder if it’s at risk of being extinguished for good.

Just what Canada needs, more Postmedia! Republicans in the USA started their Anti Democracy Campaign to stay in power forever in spite of being a minority by funding a Campaign which gave us FoxNews, the leading misinformation news outlet in the world! Puts Putin to shame. Another nail in our Canadian coffin of a free press.

The torch is indeed about to

The torch is indeed about to be "extinguished for good," which we all knew when we saw who the purchasers were. Time to shut down "bothsidesism" once and for all; the orcs are at the gates everywhere. Journalists need to call a spade a spade; who else?
One silver lining of the pandemic is that it has provided several solid giveaway positions that tell us definitively what's what and who's where on the political spectrum. Thank goodness for progressive online media like the NO and others because with the long progressive Toronto Star gone, that's it; they were the last bastion.
And Jen Gerson? Solid conservative from the prairies, period, enjoying the usual gleeful right wing subterfuge of being from that fully outed as horrible, destructive and dangerous perspective, and trying to pretend she's not. So clever. No more intellectual, journalistic pussy-footing; let's face it. ANYONE who still skews even remotely conservative is NOT to be trusted with our lives. We're in a war here....

If money "makes" news, then

If money "makes" news, then it's people voting with their wallets. I, for one cancelled Torstar after their sale (and kept National Observer), thinking that eventually the rabid right would weasel their way in there. As is becoming evident.

The jobs of CEO and Editor

The jobs of CEO and Editor are very different one from the other.
What's appalling is that she posted on Twitter under the TorStar aegis.
That said, the basic difference between Liberals and Conservatives is that the Liberals use "sunny ways" and the cover of "representation," while the Conservatives use self-righteousness and in-your-face disinformation. In the end, they just answer to slightly different teams in the election donations league (which, like all leagues, trades players of all sorts: I remember when the NHL was basically made up of players from the general area the team was "from." Which is why the Canadiens had French names, and the Leafs had WASP names.
The Liberals, for all their apologists' input, have done no better than Conservatives in power.

"Sunny ways and the cover of

"Sunny ways and the cover of representation" versus "self-righteousness and in-your-face disinformation." You consider these two things to be the same. So you don't see the unprecedented and wildly successful phenomenon of "flooding the zone with bullshit" as Steve Bannon put it to be THE most insidious and dangerous issue before us. Or the fact that cons have DELIBERATELY initiated ALL of this-- "fake news, post-truth, lame-stream media," shemelessly pushing it to the point that American democracy is teetering. Or the fact that they don't actually even "buy" science as such, INCLUDING climate change. Makes no sense, and is straight-up BS bothsidesism.
Speaking of "apologists," such an irrational statement puts you in the camp with "a pox on all houses" and sailing up there "beyond the fray" (self-righteously I might add, the giveaway) that under the circumstances smacks of being just another conservative ploy to fan ever more hatred of Liberals, and Trudeau in particular. Nasty, another giveaway.