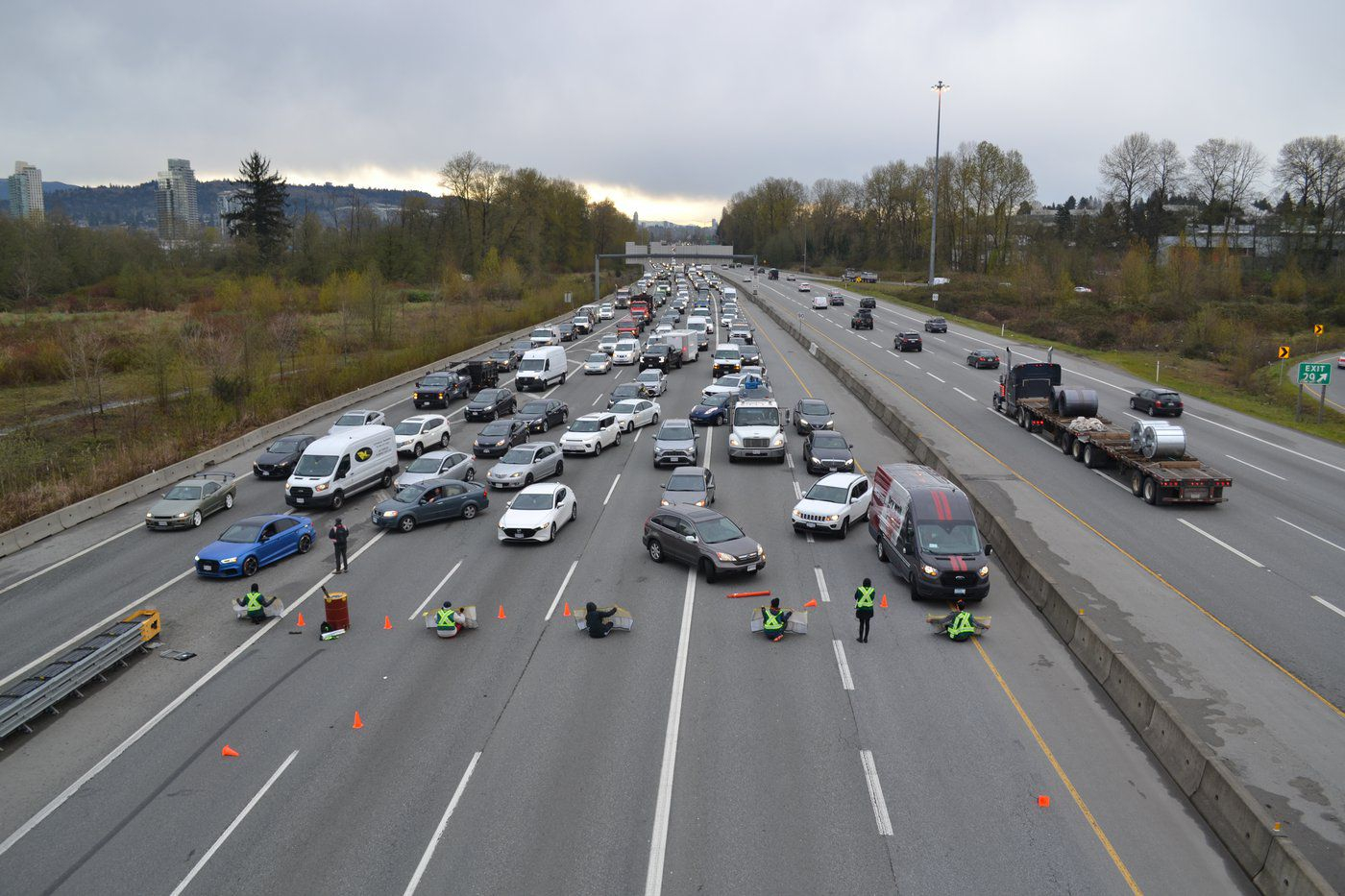 Activists with Save Old Growth block traffic on the Trans-Canada Highway in Metro Vancouver last month, calling for an end to old-growth logging in British Columbia. Handout photo by Save Old Growth
Previous story
Next story

The activists behind road blockades and hunger strikes calling for an end to old-growth logging in British Columbia say their non-violent actions are aimed at sparking public discussion and urging politicians to heed climate science.

History has shown that "when you have to force a dialogue onto society, you have to engage in transgressive truth telling," said 21-year-old Zain Haq, a spokesman for the group called Save Old Growth.

The demonstrations on busy commuter highways and bridges in Metro Vancouver and southern Vancouver Island have snarled traffic for hours, marking a different approach than blockades at Fairy Creek, where protesters have been trying to stop logging in the watershed west of Victoria.

Some protesters have superglued their hands to the highway, while others have attached themselves to barrels filled with cement to slow their removal. Dozens have been arrested and video footage shows some angry commuters have tried to drag protesters out of the way.

Haq, a student at Simon Fraser University, helped create Save Old Growth with others who had been involved in protests over old-growth logging on Vancouver Island, along with local members of the Extinction Rebellion movement calling for urgent action on climate change.

The protests blocking access to logging roads have garnered public support and helped spark debate about old-growth logging in the province, said David Tindall, a professor in the sociology department at the University of B.C.

The RCMP have made nearly 1,200 arrests since May 2021 while enforcing a court-ordered injunction against the blockades granted to the Teal-Jones Group, the logging company that holds the harvesting licence in the area.

In comparison, repeatedly blocking roads and inconveniencing commuters isn't likely to generate as much support, particularly as people's patience runs thin with the pandemic, rising gas prices and inflation, said Tindall, whose research is focused on environmental movements in Canada.

Yet from the protesters' perspective, there's just a short window of opportunity left to preserve B.C.'s remaining old forests, he said.

They've run out of patience as well, nearly three decades after the so-called War in the Woods over old-growth logging near Tofino, Tindall added.

Haq said it should be a "no-brainer" to ban old-growth logging to prevent the release of significant amounts of carbon stored in old forests.

"It's literally our future, the future of humanity is dependent on protecting these carbon sinks and lowering carbon emissions," he said in an interview.

Save Old Growth is calling on the B.C. government to pass legislation that would put an end to logging old-growth forests and provide funding to help forestry-dependent workers and communities with the transition, Haq said.

About 100 people have taken part in protests in Metro Vancouver, Victoria, Nanaimo and Revelstoke, with more than 90 arrests since January, he said.

The group plans to ramp up its demonstrations next month, with hopes of "mobilizing hundreds of people to risk arrest," Haq said.

Asked about the potential for alienating the public, Haq said less disruptive activism that's aimed at raising awareness is necessary, but "radically insufficient" to push governments to address the climate emergency.

The B.C. government announced last November that an expert panel had mapped 2.6 million hectares of unprotected old-growth forests and asked 204 First Nations to decide whether they supported the deferral of logging.

The province has so far deferred 1.05 million hectares of at-risk old growth identified by the panel, along with some additional deferrals requested by First Nations, Forests Minister Katrine Conroy announced last month.

Conroy has said the deferrals would initially last two years, allowing for consultation with First Nations about forestry in their territories. After that, she said the at-risk old-growth forests would either remain off limits for logging or be included in new, more sustainable management plans.

Haq said the logging deferrals are temporary and could be reversed by a different government in the future, with B.C.'s next election set for fall 2024.

Members of Save Old Growth have also been involved in hunger strikes in an effort to push the forests minister to participate in a public meeting.

Breen, who lives in Nanaimo, said he's spoken on the phone with Conroy, but she declined to participate in a public forum about old-growth logging.

In a written statement last month, Conroy said she was concerned about Breen's health and urged him to put his health first as the province "continues the important work to protect B.C.'s rarest and most ancient forests."

Speaking at a forest industry conference last week, Conroy said the province is following the recommendations of an independent review of B.C.'s old-growth forest management and working to develop a new, long-term strategy that "prioritizes ecosystem health and community prosperity."

Conroy also told the conference that both sides of the old-growth logging debate in B.C. are so polarized they "can't see the forest for the trees," although she believes most people are "somewhere in the middle."