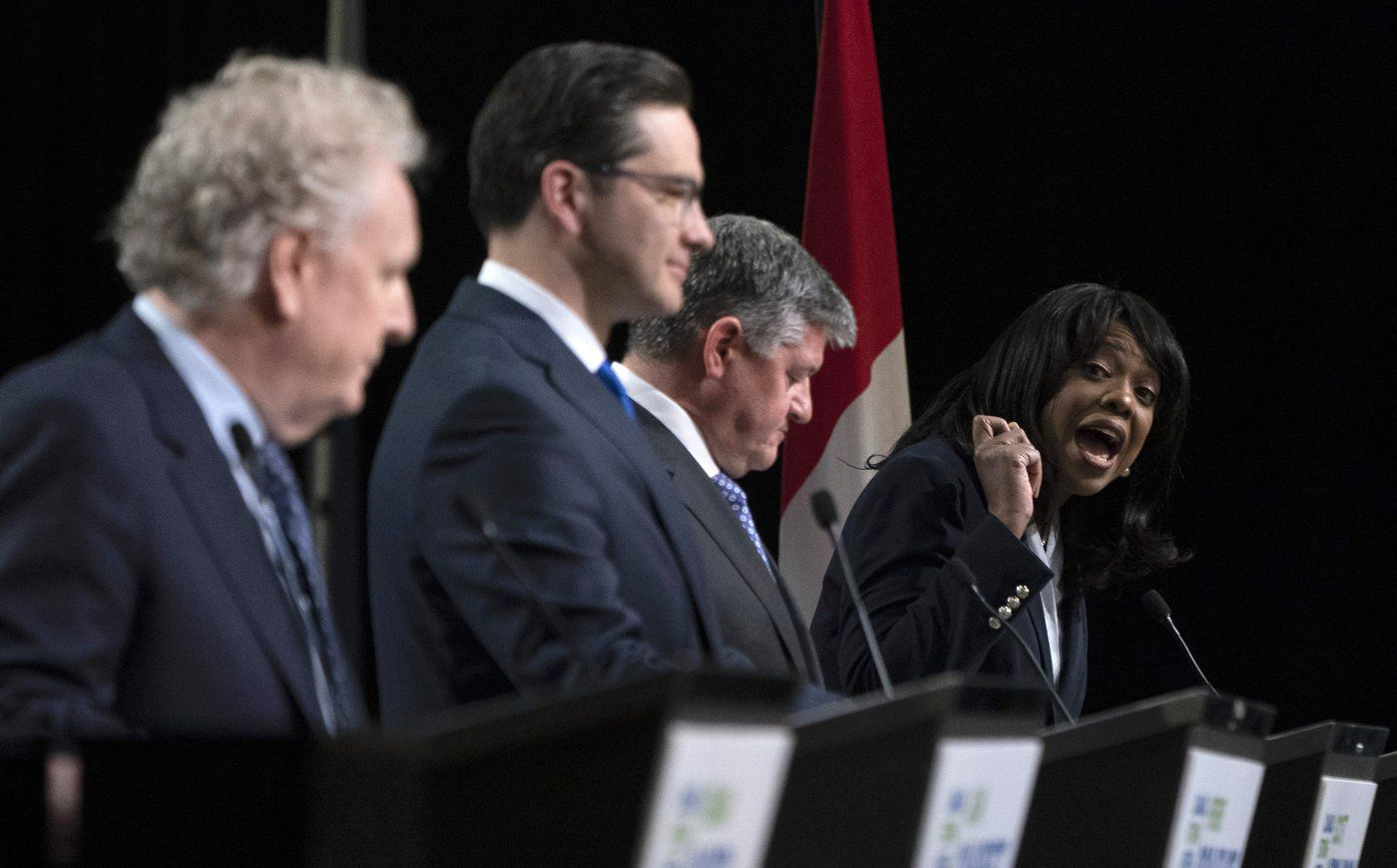 Leslyn Lewis speaks about leadership candidates Pierre Poilievre as Jean Charest and Scott Aitchison look on during a debate at the Canada Strong and Free Network conference in Ottawa on May 5, 2022. Photo by The Canadian Press/Adrian Wyld
Previous story
Next story

Poilievre, who's campaigning on a promise to give more freedoms to Canadians and has been attracting crowds of thousands at rallies across the country, took aim at Charest throughout the event, where five out of the six candidates appeared on stage before a room of conservative faithful.

The Ottawa-area MP repeatedly called Charest a "Liberal" for having once led the Quebec Liberal party, as he has done since before the former premier officially entered the race.

"We reduced income taxes and the credit rating agency actually said that that's what allowed Quebecers to come through the great recession much better than anyone else," Charest said in defence of his record.

Poilievre responded that Charest raised several other taxes, including the gas tax and the sales tax, and left Quebec the most indebted province in all of Canada during his time as premier.

At one point, Poilievre repeatedly pressed Charest about past work with the telecom giant Huawei.

"He has never told us how much he got paid," he said. "This is a company whose software and hardware has been banned from the 5G networks of four of the Five Eyes countries because of allegations, in many cases proven, that they have used it for espionage."

Speaking to reporters afterward, Charest dismissed any suggestion that his past work with the company was a liability for him in the race. He said it's not an issue that he hears about while campaigning, saying any mention of it is history. Charest said he considered the attacks on him to be compliment.

The debate, organized by the Canada Strong and Free Network political advocacy group, also featured heated exchanges between candidates about their levels of support for the truckers' convoy protest in Ottawa and for those fighting COVID-19 vaccine and mask mandates.

Charest, who is pitching himself as an experienced national leader who believes in a united Canada, earned boos from the crowd of hundreds by criticizing Poilievre for endorsing what he called illegal blockades.

Poilievre responded by saying "Mr. Charest learned about the trucker convoy on CBC like other liberals, and he misrepresented them." He added that Charest perpetuated cancel culture for saying in previous interviews that Poilievre's support of the protest means he should be disqualified.

Leslyn Lewis, the MP who placed third in the 2020 leadership race, also challenged Poilievre over his record on standing up for Canadians' freedoms throughout the pandemic. Many Conservatives opposed health measures such as vaccine and mask mandates over concerns that they infringe on personal choice.

As Poilievre tried arguing that he was one of the loudest voices, Lewis charged he was not.

“You did not speak up until it was convenient for you to speak up. You did not even go to the trucker protest," she said.

"You actually went and you took a picture in your neighbourhood at a local stop.”

Lewis, who is promising to ban so-called sex-selective abortions, also challenged Poilievre over his stance on social conservative issues. She accused him of avoiding media questions about abortion in recent days after the draft of a U.S. Supreme Court decision that would overturn Roe v. Wade was leaked.

"He cannot just be a minister of finance if he wants to be a prime minister," she said.

Poilievre said earlier in the week that a government led by him wouldn't introduce or pass laws that restrict abortion.

As Charest, Poilievre and Lewis all took turns focusing on one another, Ontario MP Scott Aitchison said on stage that as Conservatives, "all we do is yell and scream at each other," and said that's an issue if the party wants to be competitive in the next election. However, there were heated exchanges throughout the entire debate.

"Here we are calling each other names. What Canadian is going to trust this lot? We've got to do better," said Aitchison.

He also added that: "Every time I hear a Conservative talking about some conspiracy theory … there's another group of swing voters in the GTA that just are not going to come our way."

That comment prompted pushback from Lewis as well as Roman Baber, the independent MPP from Ontario who was booted from Doug Ford's Progressive Conservative caucus in 2021 over opposing a COVID-19 lockdown that was in place at the time.

Baber says many Canadians still cannot board a plane in the country because of a federal COVID-19 vaccine mandate.

"Canadians are witnessing the continuous erosion of our democracy and we should be mindful of this conversation instead of mocking them like the Prime Minister does," said Baber.

After the debate, Baber told reporters he was concerned about the divisive tone.

While the leadership contenders sparred on stage, most appeared collegial once the questions ended. Poilievre and Charest, however, studiously avoided shaking hands with each other on stage.

Candidates were also questioned on the party's past few election losses, former leader Erin O'Toole's attempts to move the party to the centre to grow support, and issues of national unity.

Patrick Brown, the mayor of Brampton, Ont., did not take part in Thursday's event. His campaign said he was focused on selling memberships to supporters before the June 3 deadline needed to vote in the Conservative leadership race.

"Some Canadians are concerned that Mayor Brown is sowing division in our country. He has been criticized for manipulating diaspora politics to bolster his campaign," Jivani said, before inviting the candidates on stage to contrast their own approach to Canadians with diverse backgrounds.

"The bottom line is that Patrick Brown says one thing in one room and exactly the opposite in another room. And that is what he has done throughout this campaign," Poilievre said in response, pointing to a flip-flop on Brown's support for the carbon tax as leader of Ontario's Progressive Conservatives.

An official with Brown's campaign told The Canadian Press his efforts to bring new Canadians into the party should be celebrated and not mocked.

Brown will be on stage next week when all six candidates take part in the first official debate in Edmonton.

The party is set to pick a new leader on Sept. 10.

This report by The Canadian Press was first published May 5, 2022.