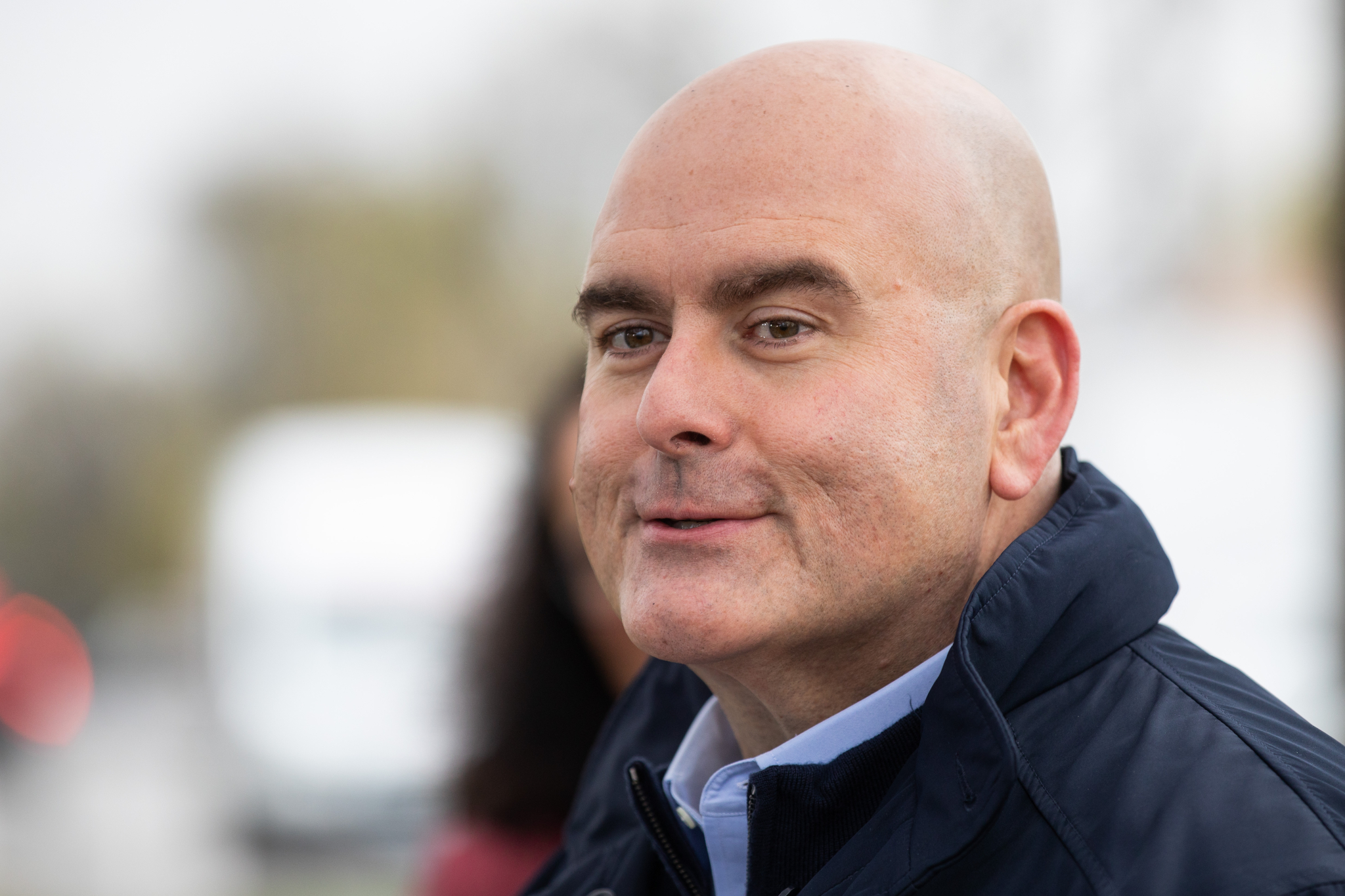 When he announced his candidacy for the Liberal leadership in April 2019, and even after he won, Ontarians had the same response: Who is Steven Del Duca? Photo by Nick Iwanyshyn
Previous story
Next story

As Ontario Liberals geared up for a provincial election, they were faced with a unique problem — too few people had heard of their leader.

Although Steven Del Duca served as transportation minister in Kathleen Wynne’s cabinet, he had failed to make a huge name for himself during his time as MPP for Vaughan-Woodbridge and he lost to Progressive Conservative Michael Tibollo in the 2018 election. It was part of the near wipeout of the provincial Liberals by Doug Ford’s PCs. The Liberals lost all but seven seats and fell from grace and the public eye.

Following his defeat, Del Duca taught at York University, and for a brief time, seemed poised to mount a career in municipal politics in York Region.

When he announced his candidacy for the Liberal leadership in April 2019, and even after he won, Ontarians had the same response: Who is Steven Del Duca?

As he leads his party into the election, Del Duca has to balance two difficult tasks: raise his own profile as a candidate for premier while rolling out his party’s platform cleanly, with no trace of Wynne-era slip-ups.

As Del Duca strives to boost his personal brand, those who oppose him are trying to advance their own narrative. According to an attack ad put out by construction union LiUNA!, Del Duca is a dishonest “yes man,” changing his stances on numerous policies, including the proposed construction of Highway 413, to suit political ends. But from the Ontario Liberals’ perspective, Del Duca is a sensible, moderate and steady leader, unmarred by the firebrand controversies of both his federal counterpart and his predecessor Wynne. Pollsters say that returns the Liberals to a healthy starting point.

“You have a very strong Liberal brand in Ontario,” said David Coletto, CEO of public opinion research company Abacus Data. Coletto said the province’s “big L” liberal leanings have positioned the party well in the past, and in the last four years has “lost a lot of the baggage that was holding it down,” leaving the party free to win back voters who opposed Wynne.

But the brand only carries so far. The polls also show Del Duca hasn’t yet sold voters on his leadership abilities. When asked which leader would make the best premier, Ontarians put Del Duca well behind both NDP Leader Andrea Horwath and Ford, with only 16 per cent of respondents picking the Liberal leader. Debate performances might influence people’s perceptions of Del Duca, but it’s clear his unfamiliarity presents a wild card for the June 2 election.

“It’s not that people don’t like him,” said Coletto. “It’s that they don’t know who he is.”

Del Duca’s team did not arrange an interview with the leader.

To win, or even boost his party’s seat count, Del Duca must hold his own against seasoned leaders like Horwath, Ford, and Green Party Leader Mike Schreiner.

As the Ontario Liberals geared up for a provincial election, they were faced with a unique problem — too few people had heard of their leader. #StevenDelDuca #OnElxn

“The leader matters a lot,” said Coletto. “He will have to perform well in order to take advantage of that natural strength that (provincial) Liberals have in Ontario. He’s going to be making a first impression to millions of Ontarians who have no idea who he is, or have never really seen him in any role.”

Coletto said if the Liberals are perceived to be in a better position to beat Ford, they might draw a “wave” of support behind Del Duca, but it’s unclear yet if that wave will crest.

Liberals clawing their way back from obscurity?

It will be a long climb back from obscurity for the Ontario Liberals, whose 2018 trouncing saw them lose party status. It also marked two worsts for the party: the most dismal electoral record in its 161-year history, and the worst result for an incumbent government in the province’s history. All told, the Liberals lost 48 of their 55 seats, while the NDP surged to pick up 40 total seats and Ford’s PCs increased their hold by 49 seats for a total of 79 to win a majority government.

Heading into this election, the lack of recognition runs deeper than just Del Duca: the party has only seven incumbents, few resources, and a province full of new, unknown candidates. University of Ottawa professor Geneviève Tellier said this position bears some resemblance to Justin Trudeau’s successful run for prime minister in 2015.

“He was able to dissociate himself from the previous Liberal governments of Paul Martin and Jean Chrétien,” said Tellier. “Nobody was making the links between Trudeau and the older ones. I think the provincial Liberals are trying to do the same thing here. Yes, Del Duca was a former minister of Kathleen Wynne, but we don’t talk too much about that.”

This relatively blank slate comes with its challenges. Tellier noted that based on Elections Ontario’s data on campaign finances between January and May, the Liberals drew just $400,000 in donations, while the NDP pulled $500,000 and the PCs raked in $5 million. On top of financial difficulties, said Tellier, there’s a lack of veteran party “know-how and on-the-ground organization” across the province.

Tellier said that while Del Duca’s leadership might be the result of the party’s failure to attract a bigger name, the lowered profile could also be a strategic advantage. While Del Duca isn’t charismatic (“That’s the least I could say,” she chuckled), his demeanour could play well in an election where voters might be drawn to perceived moderate and stable ground somewhere between the NDP and Conservatives.

“Maybe Del Duca knows his own limits and is trying to bring a diverse set of candidates, and then campaign more on the platform and the ideas than the personality,” said Tellier. “Now, we’ll see if it pays off.”

If this platform-first, leader-second approach is to work, the Ontario Liberals will need to corner and own key platform points like education and the climate crisis. While Trudeau’s federal Liberals take a lot of flak for their climate policies, analysts note they’ve succeeded in owning that issue, with the NDP and Conservatives usually responding to Liberal moves on the file.

Climate advocates say the Ontario PCs have left a wide opening here for their competitors to exploit. The Ford government “seems disinterested in addressing the climate issue at all, let alone treating it as the emergency that it is,” said Sabah Ibrahim, an Ontario organizer with the Climate Emergency Unit. And while climate doesn’t rank as a top ballot issue for the majority of Ontarians, Ibrahim said it’s tied to the election’s most pressing questions, like the cost of living, health care, housing, and more.

“Climate change exacerbates existing inequities, and almost always, the people who are least responsible for [it] are the ones who bear the brunt of its impact,” said Ibrahim. “Genuine climate emergency policies can and must be linked to ambitious plans to tackle inequality.”

Reporters have noted that the Ontario Liberals are already trying to position themselves as the leading party on the issue. After reading their climate plan released on May 3, Ibrahim said the emissions reduction goals are “feasible” and “certainly an improvement … but not quite ambitious enough to truly represent emergency action.”

Ibrahim explained the Climate Emergency Unit assesses government plans against a set of markers to determine if they’re “truly acting in emergency mode.” On the first two — spend what it takes to win and build new institutions to meet the crisis — the Liberals don’t stand above the others. Their plan allocates just $9 billion for climate action over four years, while the NDP has pledged $10 billion per year. Nor are the Liberals advancing new infrastructure plans, and instead say they are “relying on tax incentives to private sector firms to build what needs to be built.” This reliance on incentivization goes against the third marker: shift to mandatory measures instead of voluntary and incentive-based policies.

Ibrahim said voters should look for a strategy that aligns with the Ontario Climate Emergency Campaign’s 12-point Climate Action Plan, which the CEU helped develop.

Polls still suggest that a majority Liberal government under Del Duca is very unlikely, but Ibrahim said a minority government situation where both the Liberals and NDP come to a confidence-and-supply agreement that enacts “their best and most ambitious ideas” would be “a very positive step for the province.”

It’s rather discouraging that

It’s rather discouraging that so many in Ontario forget about the aggressive social program cuts, the application of <1% wage increase for public employees, the dismantling of Ontario green energy strategy (tearing down windmills in PEC, cancelling EV incentives…) the disastrous mismanagement of Covid, the LTC deaths, the MZO’s that in effect pave over conservation land and farmland, the use of the notwithstanding clause, the privatization of social programs (the pilot project to administer Ontario Works and ODSP in three regions, the expansion of pharmacies to test for and administer Covid vaccines), the planning of highway 413 and the lack of interest and support for Ottawa’s police force to remove the truck blockade, the failure to follow through with many election promises (recall the 12% electrical fee reduction) and yet Mr Del Duca is being held to account for his previous time in government.

While I didn’t subscribe to all Liberal and NDP policies I certainly can’t fathom another 4 years of this PC government. If this were to occur then I really have to consider that this province and Canada as a whole has dramatically changed from a more caring society to one where one cares primarily about oneself and to hell with society’s issues. Having lived and worked in Ontario for over 6 decades I don’t recognize my fellow citizens nor their lack of interest in social issues and humanity. It’s rather shameful.
When Premier Ford announces that “Ontario is Open for Business”, that is a complete and honest statement; “for business” without any concern for individuals, employees or families.

Imagine discounting an educated leader who has taught in a university yet supporting a poorly educated individual who sells himself as “just an ordinary citizen”, one without vision or understanding of both the short and long term effects of the policies that he enacts.
Premier Ford has self identified as a big Republican supporter: yes indeed, don’t we know it.

This is likely the most critical Ontario election in my lifetime and as surprised as I was that Mr Ford won the last election, now I am truly terrified if he were to win again.
All the best to Mr Del Duca, Ms Horwath and Mr Schreiner.

Would you please stop it with

Would you please stop it with the "Wynne-era slip-ups" disinformation. Compared to Doug Ford her record is impeccable. Usually when I ask people to name all these "slip-ups" they have next to nothing. Basically she was painted with McGuinty mistakes for the most part. I think much of the trashing was that the press didn't like that she was a women and a lesbian. The media has repeated this myth and amplified Doug Ford's lies about her. Quite frankly it's disgusting.

>> ...a minority government situation where both the Liberals and NDP come to a confidence-and-supply agreement that enacts “their best and most ambitious ideas” would be “a very positive step for the province.”
__________

As long as such an arrangement meets the requirements of parliamentary democracy, it will work just fine. Strategic voters in Ontario should think about that, along with those who are too sick of Ford's governance to stick to party allegiances 100% of the time and risk splitting the progressive vote.