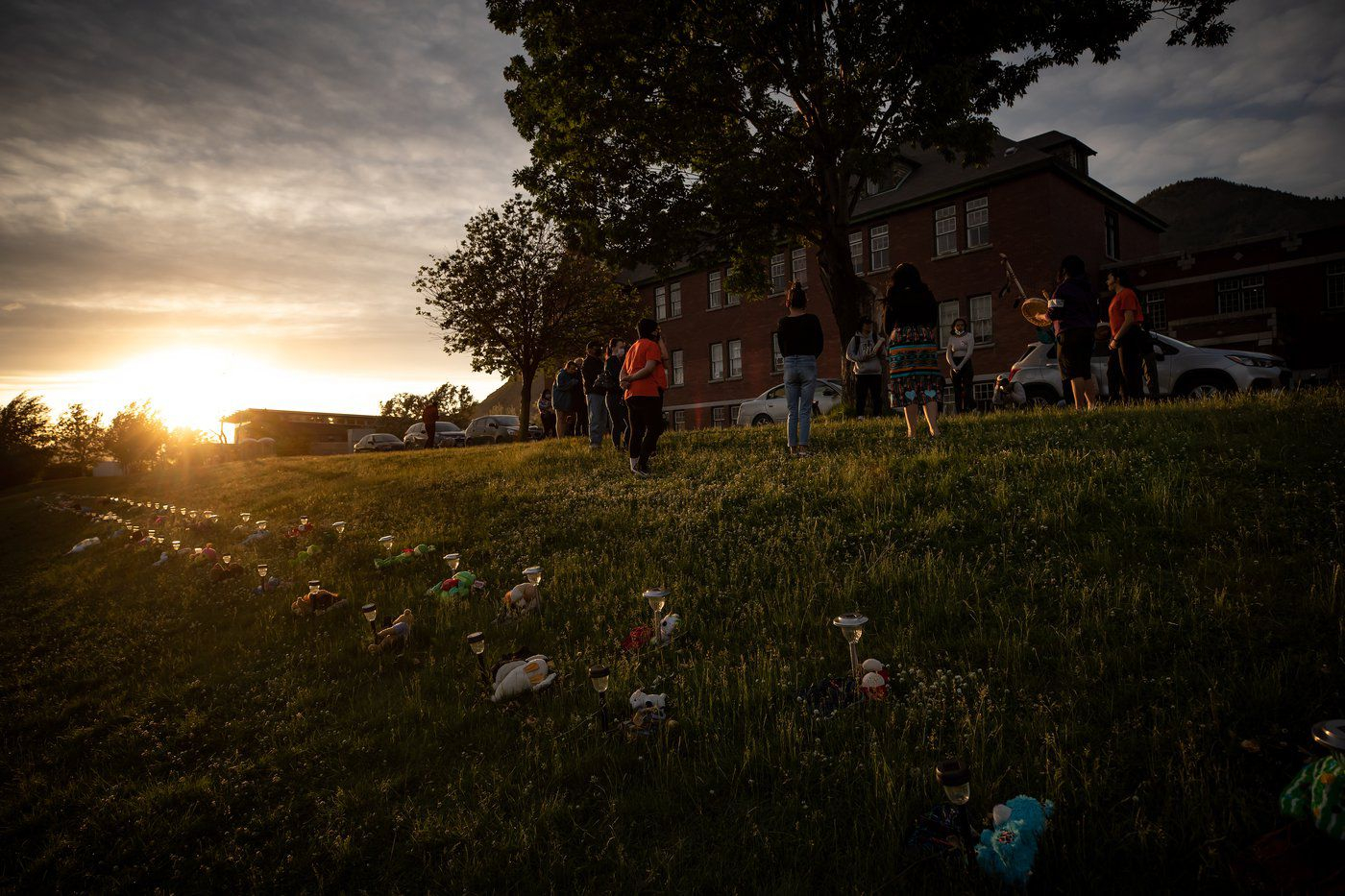 A group of youths lead a group drumming and singing at sunset outside the former Kamloops Indian Residential School, in Kamloops, B.C., on June 4, 2021. File photo by The Canadian Press/Darryl Dyck
Previous story

He has spent the past year grieving.

A member of the Bonaparte Indian Band near Cache Creek, B.C., Casper said he was deeply distraught when he heard the news last May, when Kukpi7 Rosanne Casimir, Tk’emlups te Secwepemc Nation Chief, announced that a war graves expert using ground-penetrating radar had located 215 suspected unmarked graves at the site of the former school.

So, Casper grieved, for lost classmates, and for himself. His emotions twisted into a painful knot when Indigenous leaders later visited the Vatican to meet the Pope who represents the church that he says abused him.

But his spirits have been lifted by strangers, he said.

"Families have walked up to me and literally put their hands out and said they were ashamed of who they were on account of what we went through," he said.

Casper’s emotional journey echoes a year of reckoning for Canada as it confronts the legacy of its residential school system for Indigenous children. The findings in an old apple orchard would reverberate from British Columbia's Interior to Ottawa, the Vatican and beyond.

The discovery represented what Casimir called at the time, an “unthinkable loss”. The existence of unmarked graves had been a "knowing" among school survivors and elders, but the high-tech survey represented confirmation for Canada, she said.

The detection of hundreds more suspected graves connected to residential schools across the country would follow.

Prof. Geoff Bird, an anthropologist at the school of communication and culture at Victoria's Royal Roads University, said the unmarked graves represent a profound moment in the nation’s history.

"The discovery of children buried in residential schools across the country was perhaps, I would say, the most traumatic event in recent Canadian history in terms of defining who we are,” Bird said.

"When you actually have a discovery such as this, it can't do anything but impact the nation and its perception of itself,” he said.

Bird, an expert on cultural memory and war heritage, said Canada could not ignore the harsh realities of the residential school experience, even as it grappled with other issues, like climate change or the ongoing COVID-19 pandemic.

"The whole field of cultural memory is what we remember, what we forget, what we silence," he said. "We can't be blind to our own history."

There have been previous attempts to face that history. A 4,000-page report in 2015 by the National Truth and Reconciliation Commission detailed harsh mistreatment at residential schools, including emotional, physical and sexual abuse of children, and at least 4,100 deaths at the institutions.

The report cited records of at least 51 children dying at the Kamloops school between 1914 and 1963. Officials in 1918 believed children at the school were not being adequately fed, leading to malnutrition, the report noted.

But the findings last May would transfix the national gaze in a way that a written report, no matter how grim, could not.

The Kamloops residential school operated between 1890 and 1969, when the federal government took over operations from the Catholic Church and operated it as a day school until it closed in 1978.

"When you look at other nations around the world that have gone through their efforts toward truth and reconciliation these are difficult things to come to terms within a nation's past," Bird said.

The moment of reckoning has extended abroad. China, for example, has said Canada should not criticize other nations on human rights, while unmarked graves of missing children were being discovered on its own soil.

"I think those kinds of situations, with, say, China are just examples to dilute the focus on their lack of human rights internally," Bird said.

On the other hand, a visit to Canada this summer by Pope Francis "will be a powerful and symbolic act,” said Bird. Indigenous leaders visited Francis at the Vatican last month, prompting him to issue an apology for the harm caused by the church at residential schools.

“For the deplorable conduct of these members of the Catholic Church, I ask for God’s forgiveness, and I want to say to you with all my heart, I am very sorry,” Francis said.

At a recent international book fair in Bogota, Colombia, where he was a keynote speaker, Gottfriedson said many asked about Indigenous issues in Canada.

"The questions were related to this very topic and why isn't Canada doing anything about it," he said. "The people from abroad know what's going on here."

Gottfriedson, who provides counsel and curriculum advice to Thompson Rivers University in Kamloops on Secwepemc Nation protocols and cultural practices, said any act of recognition would help because Canada had so far to go in coming to terms with residential school history.

Over the past year many Canadians sent messages of support and understanding, said Gottfriedson, adding much of the correspondence came from immigrants to Canada.

"The Sikh people in Surrey, I got invited to a feast," he said. "I am a poet. They read my work. It was beautiful. The message was: 'You are not alone’.”

Any acts of recognition and reconciliation with Indigenous Peoples, big or small, were steps toward national healing, said Bird.

"It's about addressing, in an open and transparent way, what's happened over the decades and not silencing it and not forgetting it," said Bird. "It's about symbolic action right now. Acts of remembrance, acts of reconciliation that are very visible and very powerful."

Prof. Nicole Schabus, an Indigenous and environmental law expert at Thompson Rivers University, said the unmarked graves discoveries had resulted in many school survivors pursuing a deeper sense of healing.

The graves also left the chilling question of genocide on Canadian soil.

"You need international oversight," she said. "Canada can't investigate itself. The forceful removal of children from their families with that intention of taking their culture away is genocide."

The outpouring of shock and emotion by many Canadians could signal a new understanding between Indigenous and non-Indigenous people, said Bird, calling it a breakthrough moment.

"Little shoes on the steps of the legislature are powerful images,” said Bird, referring to how protesters used children’s shoes to represent lives lost at residential schools. “When we think of children, we can all understand the terror and the trauma of that. It cuts across every culture."

Casper said he was grateful for the acknowledgment of his experiences, and the shared grief of strangers.

"They showed some remorse and I really appreciate it," he said.