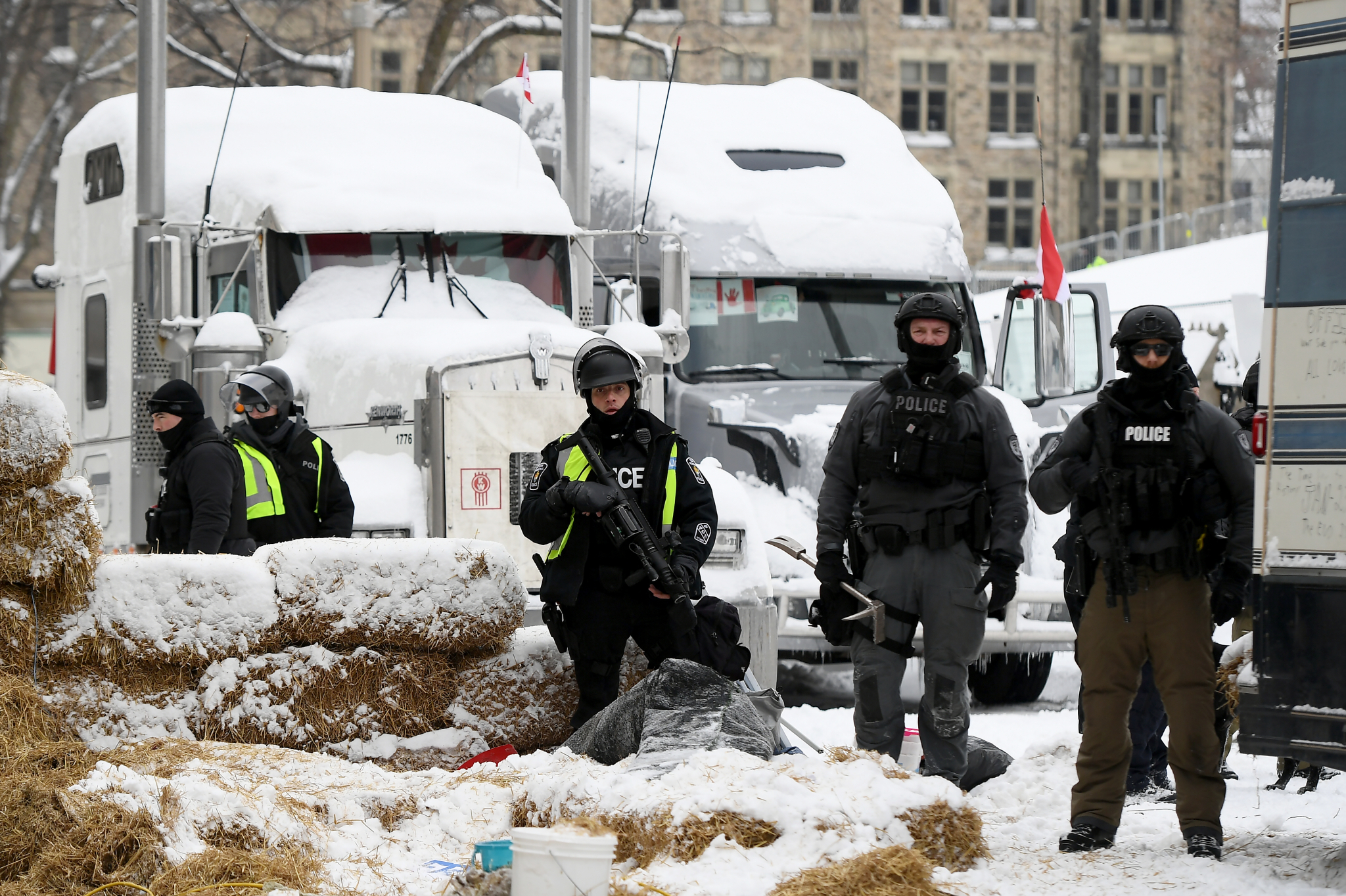 Police stand in an area which once hosted a bouncy castle as they take action to put an end to a protest in Ottawa on Feb. 19, 2022. Photo by the Canadian Press/Justin Tang
Previous story

In America, the recent hate-motivated massacre at a Buffalo grocery store is just one of a mind-numbing array of mass shootings that seem to happen almost every day. It won’t prompt legislators there to pass new gun control laws, and it won’t have a meaningful impact on their politics. If the murder of 20 children and six adults at Sandy Hook in 2012 didn’t do that, nothing will. It will simply be accepted, more readily by some than others, as the cost of their freedom.

In Canada, though, it’s a different story, and it’s already become a major issue in the Conservative Party of Canada leadership race. Patrick Brown called on his fellow candidates, and specifically Pierre Poilievre, to denounce the “great replacement theory” cited by the Buffalo shooter as motivation for his hate crime, which targeted a disproportionately Black community.

That theory, which stupidly posits governments are trying to use immigration to “replace” white people, has been pushed and propagated by none other than Pat King, one of the key organizers and leaders of the recent occupation of Ottawa — one Poilievre still vocally supports.

Poilievre released a statement that tried to let him still have his populist cake and eat it, too. “I supported the peaceful and law-abiding truckers who protested for their livelihoods and freedoms while simultaneously condemning any individuals who broke laws, behaved badly or blocked critical infrastructure,” it said. “I also condemn Pat King and his ugly remarks.”

But King’s remarks shouldn’t be an afterthought here, and neither should Poilievre’s proximity to them. Back in 2019, after all, Poilievre was one of a small group of Conservative MPs who met with the “United We Roll” rally, a group of western Canadian truckers with anti-Trudeau and pro-pipeline views that included — you guessed it — Pat King. Poilievre stood just a few feet away from King as he shook then-leader Andrew Scheer’s hand.

When King arrived in Ottawa earlier this year, his well-known views about the supposed “Anglo-Saxon replacement” shouldn’t have been a mystery to Poilievre. Neither should King’s role in the occupation of Ottawa, one that was reported on by any number of credible outlets. And yet, until Brown forced his hand earlier this week, Poilievre hadn’t tweeted a single critical word about him or his hateful views.

The contrast between his grudging rebuke of King — one he didn’t share on his Twitter account — and Michelle Rempel-Garner’s statement about the “great replacement” theory speaks volumes here. “Platforming and giving space to the efforts of those who espouse this treasonous bullshit is tantamount to complicity,” she said. “Pat King stood in the convoy and Pat King stood for this. We have to purge our own tents of hate, in all forms, or Buffalo happens.”

She’s right. But purging the Conservative Party of Canada’s tent of hate is going to be very difficult, given how long and hard people like Poilievre have worked to churn up anger against any number of supposed enemies, from elites and “gatekeepers” to environmentalists, public servants and, of course, his Liberal and NDP opponents. The ramifications of those efforts were on full display last week in Peterborough, when a violent mob accosted NDP Leader Jagmeet Singh, hurling death threats and accusing him of being a traitor.

The shooting in Buffalo won’t wake Americans up to the catastrophe that continues to unfold in their country. But it’s not too late for Canada. And while it might be tempting to tell ourselves we’re better off on this front than Americans, that’s just not good enough. “More Muslims have been killed [here] in mass Islamophobia inspired attacks than anywhere in the G-7 in the past five years — including in the United States,” Mustafa Farooq, the CEO of the National Council of Canadian Muslims, told me on Twitter. “We have major problems in this country.”

The only way to address those problems is to tackle them head-on. That means pushing back hard and fast against racist conspiracy theories like the “great replacement” and demanding that people who trade in them are held to account. That goes double for our political leaders, who should be held to the highest possible standards here. Nobody seriously believes Poilievre would subscribe to such an odious and racist view of the world. But his willingness in the past to tolerate and even empower people who do should raise some serious questions about the judgment and character of a man who aspires to be prime minister.

Housing crisis in Ontario worse than ever, Gen Squeeze says

Here we are playing this game

Here we are playing this game of chicken again with conservatives as in SURELY they can't actually think/believe this, surely they're just "appealing" to their fractious and irrational religious base that is also the ubiquitous squeaky wheel, but because it's bizarrely still not acceptable to criticize religion and/or its attendant magical thinking, we politely call these people the "social conservatives." There are enough of them to enable at least one of the leadership candidates to be loud and proud about it, which is the sanction for her being boldly AGAINST women's right to choose, contrary to the majority of Canadians, Americans too, but that has NOT stopped their Supreme Court from becoming otherwise. We have a foreshadowing of this in Alberta where the Alberta Court of Appeal has agreed with the stupid conservative views of jurisdiction when it comes to the environment, even in a time of climate change. It needs to be said repeatedly that conservative views have truly devolved into a "suite of stupidity," period. The hopeful thing here is the Liberals coming to an agreement with the NDP; this shows some acknowledgement of the danger of continuing to allow conservatives parity as a valid governing party for this country.
Poilievre is the Trump moment for the CPC and it looks like, along with the religious faction, the populist fervour has the same dumb appeal here, so no matter how outrageously un-Canadian it appears to be, it's all about winning. He's already modelled this with the obviously unfair "Fair Elections Act." Remember that? His face may have cleared up since then, but his shocking dishonesty and lack of scruples remains loud and proud, which makes him the perfect poster boy for the CPC at this point, "boy" being the right word. Leadership in this context comes down to who can be the baddest boy of all, the most rogue with the sharpest elbows out, because that's how you win the game after all.
Bring on the women leaders I say; we SO cannot afford this nonsense anymore.

We are just getting caught up

We are just getting caught up with season four of the Handmaid's Tale. I think Alberta is just three steps from a version of that reality. Your comment is prescient.

Poilievre being the current

Poilievre being the current example, I don't think going along with this racist evil even though you don't actually believe in it is somehow better than genuinely believing it. I mean, what would you call someone so cynical that they'd stand by for and even cheer on racist violence against people they don't actually even have a problem with, just for political advantage? That's psychopathic.
As to women leaders . . . I dunno, there are individual examples of woman Conservatives who don't tolerate this stuff, and of Conservative men who don't . . . but plenty of other examples of woman Conservatives who are as bloodthirsty as any of the men.

Psychopathic? Yeah, that's true, and maybe partly explains the relative success of the right wing at the moment, the fascination with rogue actors like Trump as both novelty and entertainment. Maybe if politicians stopped using the same anodyne, plodding language it would help.

There is and was "replacement

There is and was "replacement" going on and it is and was racist. BPOC have long provided cheap labor (and cheap resources) for white supremacists.

I am very disturbed and

I am very disturbed and worried about Poilievre's politics of anger and hate. He is becoming more and more like Trump, capitalizing on people's hate and fear and attacking institutions like the Bank of Canada for his own political advantage. Shame on him! As the Maclean's article points out, this is such a waste of his intelligence, which could be used towards constructive solutions for the challenges Canada faces.

It's ironic that Poilievre is running on a platform of "freedom" when Canada is considered one of the most free countries in the world (# 5 I think). And he seems to support people like Pat King (a blatant racist) who wanted to bring down our democratically -elected federal government during the Ottawa protests.

I watched the English Conservative debate last week. It's shocking to see that they still won't accept the reality of the Climate Emergency let alone do anything about it.

I think the moderates of the

I think the moderates of the CPC should leave & reform the Progressive Conservative Party, and accept that merging with the extreme Reform Party to win as a right ideology was a bad idea.

That is my big hope in this

That is my big hope in this day and age of anger and resentment. Peter Mckay, Harper and his cohorts should all be strung up for treason. Harsh words, yes, but in reality, the Reform/Alliance/Conservatives should never have been allowed to stage their coup.

Some politicos will fish for

Some politicos will fish for votes from a stinking cesspool filled with slithering reptiles. Of course, that has nothing to do with building a nation and everything to do with garnering attention of any kind merely for name recognition and as click bait.

Let the CPC elect this man as leader, let them splinter as a result, and let the centrist and progressive majority rule.